There are some stories that just seem to stick with us, and one of “that little girl”, Alexiea Blake, first captured our hearts five years ago in the story “A Little Girl Finds Love in Amy Tryon’s Former Ride”. We’ve enjoyed updates on Alexiea and her love of eventing that first surfaced standing by the cross country warm-up at Richland Park in 2015, and this Christmas it feels perfectly fitting to add another chapter.

Alexiea Blake first met Kentucky-based Lauren Ferguson in 2015 when she was enraptured by Lauren’s ride, Landretti, one of the last remaining horses from the late and great Amy Tryon’s competitive string. “Alexiea was just ‘stuck’,” her mother, Jennifer Blake, recalls now. “After Lauren came over and offered to let her pet her horse, I don’t think I could get her to move.”

Jennifer remembers a gut feeling washing over her as she watched her then-eight-year-old daughter rooted in the spot, transfixed by the horse in front of her. It wasn’t just the general atmosphere or the multitude of horses in the warm-up – it was that specific horse.

What transpired from there is a story both Jennifer and Lauren love to relive even now, years later. Talking to each of them separately, they tell the story exactly the same, a sign of how well they remember their chance meeting and how much they mean to each other now. Jennifer had, much to her chagrin, gone on an all-out barn stalking mission with Alexiea after the cross country had concluded that day, looking for the rider they’d met in the warm-up. After an unsuccessful search, Jennifer was able to locate Lauren’s email address and sent her a quick message, unsure of whether the rider would see or respond to it. Yet a few hours later, stuck on the side of the road with a blown tire, Lauren scrolled through her emails and came upon Jennifer’s.

“I was actually hiding in the corner of the warm-up at Richland because I was running a little early on ‘Leroi’ and I didn’t want him to get nervous,” Lauren says with a laugh as she recalls the meeting from her point of view. “I looked over and little Alexiea and Jen were standing there and Alexiea just had these stars in her eyes looking at the horse. So later when I was reading Jen’s email, I knew I wanted to reach back out and we have just kept in touch from there.” 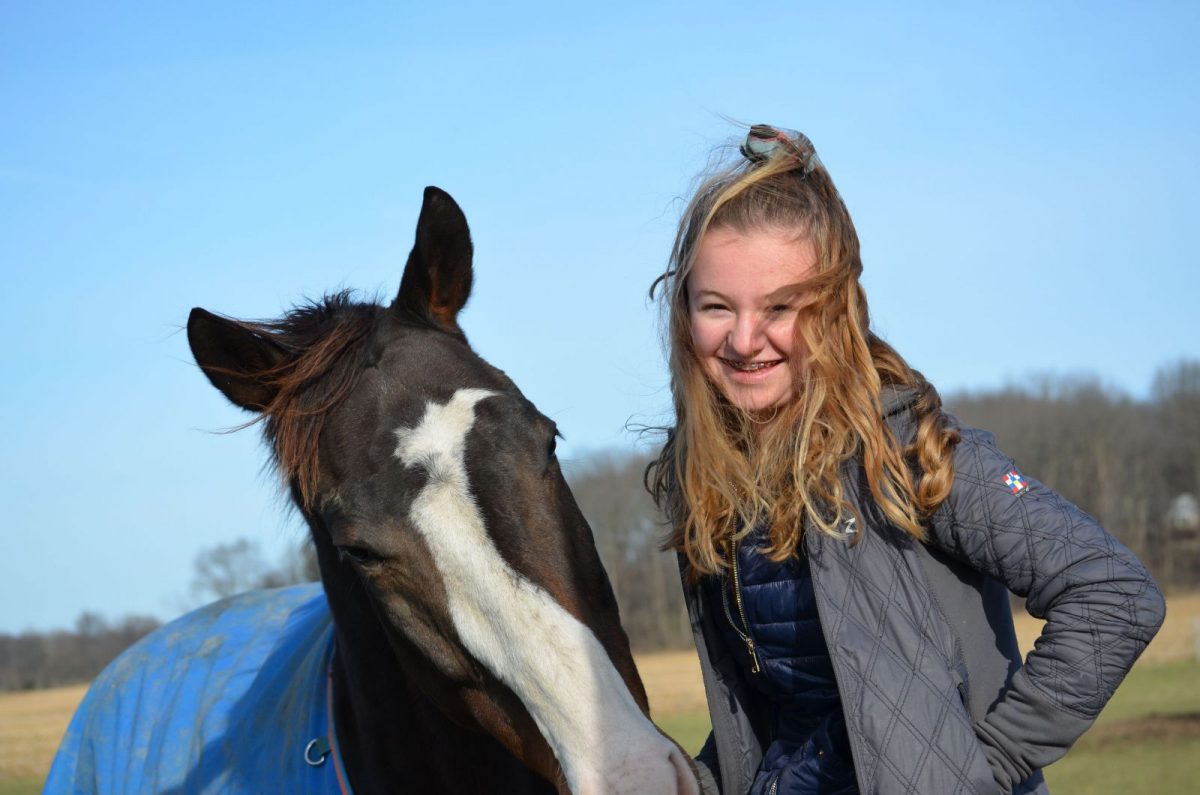 And so, the two families became fast friends, quickly turning phone conversations into weekend trips down to Lauren’s farm in Lexington to groom at a competition or just spend time around Leroi and the other horses. Alexiea, meanwhile, began eventing herself, making her Beginner Novice debut last year. The Blake family has gone on to build horse facilities onto their sprawling property in Michigan, room to grow with Alexiea’s riding goals. But there was some extra room at the farm that could use some filling – another lucky coincidence, as fate would have it yet again.

“I absolutely love that horse,” Lauren says of Leroi, the 13-year-old Thoroughbred gelding, who was sent to her to ride by Amy’s husband, Greg, following her passing in 2012. “He can be a little tricky, but I absolutely just fell in love with him. But he wasn’t super brave with the jumping, and he got very frazzled with the pressure. He’s very sweet – he’s perfect on the ground – but the pressure just gets to him.”

As Leroi’s competitive career began to wind down, Lauren made the decision to retire the gelding for a less demanding life. While she had the ability to give him a retirement home herself, a thought occurred to her. Just a few hours north lived a girl who loved this horse more than anything. Could she and Jennifer pull off an epic surprise?

After a few calls and arrangements were made – Greg Tryon gave his blessing to sign the ownership of Leroi over to Alexiea – Lauren loaded up the gelding and headed north. Jennifer had told her daughter the news earlier and Alexiea, though typically one to keep her emotions in check, could hardly believe her ears. “Seriously? Can he come home?” she asked her mother.

There wasn’t much of a dry eye to be found when Lauren arrived at the Blake’s farm, Leroi in tow. The bill of sale, for a price of one dollar which Alexiea proudly handed over to Lauren as Leroi’s official new owner, was signed and Leroi was, at last, home to stay with his own little girl.

Alexiea tells her mother that she wishes she could have met Amy Tryon, who undoubtedly would be smiling at this turn of events with one of her beloved horses. For Lauren, finding the perfect soft landing for a horse that represented so much to her – she’d spent over six years working for, traveling the world with, learning from Amy – was the ultimate goal. “Amy loved that horse so much,” Lauren says. “And for me he is a connection to one of my longtime mentors and friends. Lex had always wanted him and when they had the room to take him, I just thought this is exactly what Amy would have wanted.” 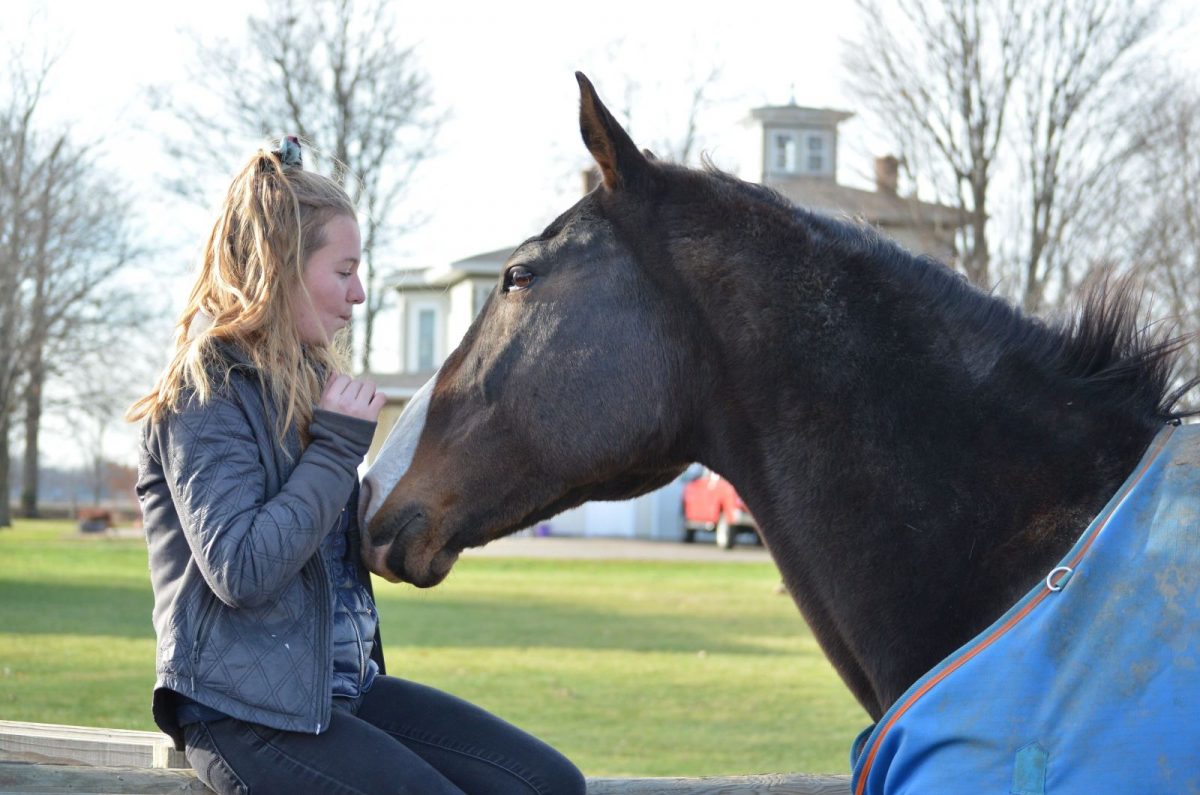 It’s an equally special ending for the Blakes, who say that the whole story began with just the five minutes that Lauren took to say hi to Alexiea during that chance meeting at Richland and, later, to respond to her email. “It’s made all of us better people,” Jennifer says of the ever-growing network the family has been lucky to be a part of within the eventing community. “It’s given my daughter a lot of opportunities, and we’re so incredibly grateful. I think the horses – and Leroi in particular – have made all of us better people.”