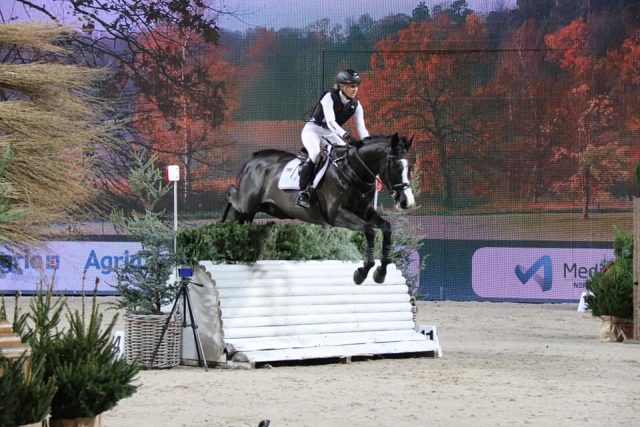 Ingrid Klimke and Parmenides led Team Germany to victory on Thursday at the Sweden International Horse Show Indoor Derby. After winning the class here in 2015 and finishing second in 2017, we knew they were the ones to beat and they delivered, turning in a lightning-fast round.

“He’s my most fun horse,” Ingrid says of Parmenides, a 14-year-old Trakehner gelding (Sir Chamberlain x Praedestina, by Habicht) owned by his breeders Marion and Eric Gottschalk. “He loves to go against the clock and go fast. But he can also go out and do a good dressage competition.”

The pair is on a hot streak, having won the indoor derby at Stuttgart German Masters just two weeks ago. The prize for winning at Sweden International was a tractor, which she won last time as well but never got to enjoy. “We sold the last tractor and saved the money to find a young promising horse,” she says.

She praised the competition’s atmosphere. “It’s great to ride here,” she says. “I would love to come back again.” 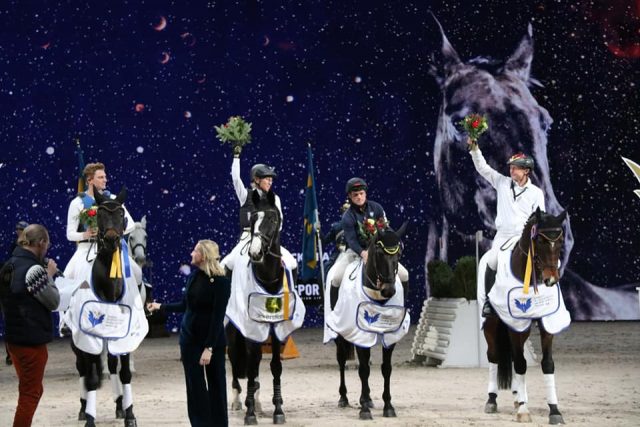 Finishing second individually was Great Britain’s Ros Canter and her own Las Vegas, a 10-year-old Holsteiner gelding (Glock’s Lightning x Chamonix). The one-two Ingrid/Ros punch was a repeat of their placements at Stuttgart earlier this month — it’s been fun to see the two women trading out the top positions all fall, with Ros of course barely nudging Ingrid out of gold medal contention at the WEG in Tryon. Rounding out the top three was another German, Peter Thomsen, with Horseware Nobleman, a 9-year-old Holsteiner gelding (Nekton x Candillo) owned by the rider and Tabitha and Christian Gläsel.

[Germany Unbeatable on the Field Competition]