Jennie Brannigan and Cambalda jumped a double clear round over Richard Jeffery’s show jumping course this afternoon at the Land Rover Great Meadow International here in The Plains, Virginia, to hold the CIC3* lead on their dressage score of 39.8. She had to kick for it, but, as Jennie put it, “The horse goes the way he goes. That is Ping.”

“I don’t think at this point that it’s a surprise to anyone that Cambalda is a bit behind the leg. He’s the type of horse that you maybe want to have a little bit of a rub before you go into the ring,” Jennie said. “In hindsight I think I’ll change how I warm the horse up and only jump four jumps and then go. I thought by the time he got into the ring he felt like he had tried really hard, and he felt a little bit flat.”

Jennie and the 13-year-old Irish Sport Horse gelding owned by Tim and Nina Gardner will have 1 penalty point of breathing room over Buck Davidson and Ballynoe Castle RM to play with tomorrow on Mike Etherington-Smith’s new cross country course, which she said she’s honored to tackle after watching her jump jockey friends ride in the famed Virginia Gold Cup.

“Being someone that appreciates racing, this is quite an honor to be here,” Jennie said. “The course is fantastic. Mike E-S is an amazing designer, and it’s a super piece of ground. I think we’re all nervous about the rain, but at the same time, I don’t think you have better turf than this turf. This is probably the best turf in the country.” 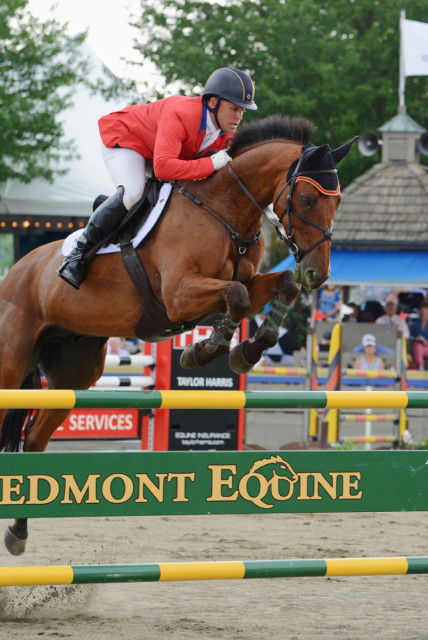 Jennie and Ping are in the running for the traveling reserve slot on the U.S. Pan American Games team, and she’s also been awarded a Land Rover Competition Grant to compete at the new Rebecca Farm CCI3* next month. At the same time, she’d also like to use the free overseas flight she won at last year’s Dutta Corp Fair Hill International CCI3* to go to Pau this fall. How does Jennie cope with that uncertainty hanging over the remainder of her season?

“The last six months have been a huge mental deal. Maybe people don’t realize the toll it takes a little bit as a younger person to not be named on a list and then get an email out of the blue. I had no clue that I was going to get vetted for the Pan Am Games. And for me to wish well on my friends and want to be a team player for my country, all of that is very important to me,” Jennie said. “It’s a little bit funny because you’re trying not to get hopeful, but then trying to care, but then trying not to care; it’s lot to think about.

Whatever tomorrow’s outcome, Jennie said she believes in Ping. “The results are there. He deserves to be in consideration for the Pan Am Games. I know I just want to do the best job I can and hopefully this is groundwork for the team believing in me in the future. Whatever they need me to do, I’ll do.”

Buck Davidson and Carl and Cassie Segal’s Ballynoe Castle RM jumped another of the 12 double clear rounds this afternoon to sit in second place on 40.8. “I thought Richard did a really good job with such a small ring of actually giving you places to go,” Buck said. “I thought last year it was maybe a little bit too twisty and turny and too tight. I thought he did a really good job of making it feel bigger than it really was.”

Lynn Symansky and Donner moved up to third place on 42.8 after jumping double clear, followed by Michael Pollard and Ballingowan Pizazz in fourth on 47.3, and Buck Davidson and Petite Flower in fifth place on 49.0. The CIC3* horses jumped first, followed by a quick ring drag and adjustments to a few of the fences for the Pan Am prep trials division. 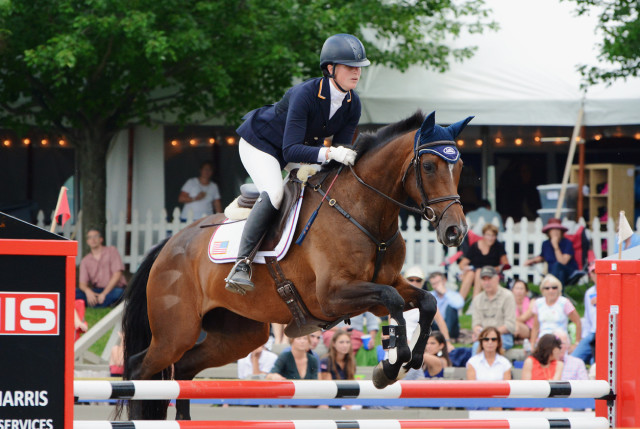 Lauren Kieffer and Marie Le Menestrel’s Meadowbrook’s Scarlett lead the Pan Ams division on their dressage score of 43.3 at the conclusion of show jumping, but she was the first to point out that dressage leaders Phillip Dutton and Fernhill Cubalawn would almost certainly still be winning had the horse not fallen after landing from fence 8.

It truly seemed to be a freak thing, as “Cuba” was jumping beautifully before the fall. Thankfully, Phillip confirmed on his Facebook page that both he and the horse are OK, and U.S. team vet Dr. Susan Johns gave Cuba a thorough examination after the incident. We’ll continue to bring you more updates on Cuba and how this will affect the U.S. Pan Ams picture.

As for what Lauren thought about the course: “I thought it was great. It rode well. I felt like I was out there for a really long time, but it certainly all rode the way it walked,” she said. “I can’t believe what happened (to Phillip). He would clearly be winning. The horse was jumping incredible, so I think it was kind of a fluke thing.”

Lauren said it’s valuable to be able to expose the horses to an atmosphere like Great Meadow, which is far more busy and electric than what we’re used to seeing at major events in this country. “I’m thrilled to be able to get the (Pan Ams) alternate Vermiculus out here,” she said. “He certainly has never seen an atmosphere like this, and neither has Scarlett, but they are both keeping very cool heads about it all.” 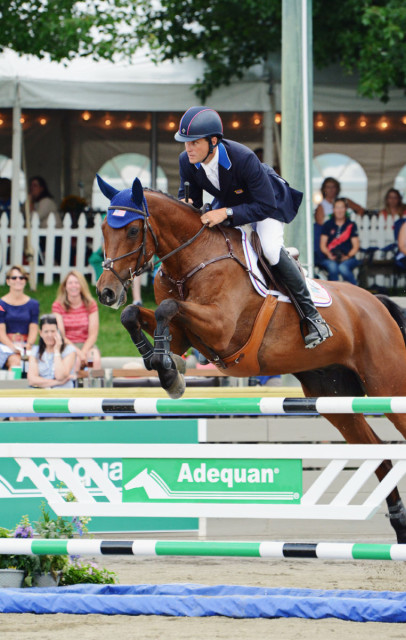 Boyd Martin, who is sitting in second place in the Pan Ams division on 43.9 with Pancho Villa after jumping double clear, said the atmosphere also proved beneficial for his horse: “It was good for my bloke because he can get a bit spooky, and I thought it was a good experience for him to get in a small area with lots of things to distract him. I think he stayed focused and jumped well.”

With this being the U.S. team’s final cross country run before next month’s Pan American Games, Lauren said she intends to go out and have a quick round with Scarlett: “I won’t try to make the time, but I want to have a nice forward go since it’s her last run. And with Vermiculus, I’ll play it by ear. It will certainly be the biggest track he’s ever done.”

Boyd said tonight’s rain may factor into his decision as to how he tackles the course tomorrow. “I think the ground should be good, especially in this first field,” he said. “We’ll just see what happens with the rain tonight. You never know, it might be raining in Toronto, so you just gotta get out there and take it on no matter what the conditions.”

It’s noteworthy that Boyd made those comments before the onslaught of tonight’s severe thunderstorms. The organizers wisely decided to modify the show jumping schedule based on the forecast, moving the start time up to 5 p.m. EST and sending horses into the ring at two-minute intervals. Heavy rain started falling just as Jennie Brannigan finished her interview in the press tent, and suddenly it felt like we were all in the middle of a hurricane. 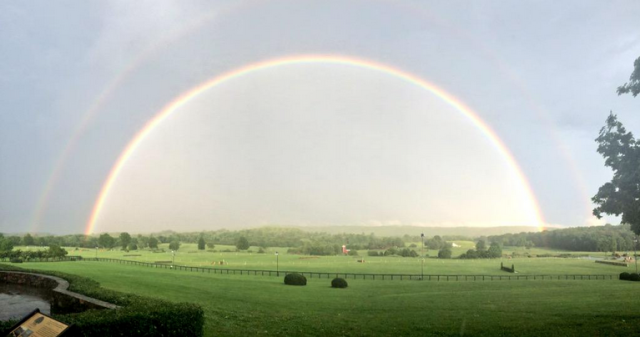 The calm before the storm. Photo by Jenni Autry.

The organizers opted to evacuate the grounds between two storm cells — as a double rainbow appeared over the cross country course, signifying the calm before the next storm. The Land Rover USA crew heroically transported spectators, patrons and even the journalists to safety in a fleet of Land Rovers as the winds brought down tents all across the property. It was truly an unbelievable sight.

Thankfully, the temporary stabling for the horses held up just fine in the strong winds, though the aisles flooded badly. Everyone from the riders and grooms to owners and volunteers pitched in to dig trenches, and David O’Connor confirmed to EN that all horses are safe following the storm: “All the horses are dry and safe. They are safe here in the tent or have moved off property. Amazing eventing community — they all came together to make it safe for the horses.”

We’ll have much more on the storm coming your way next. In the meantime, you can check out the photos and videos I posted on EN’s Facebook page. Cross country starts tomorrow at 9:30 a.m. EST, and remember that you can watch live thanks to USEF Network. Go #LandRoverGMI. Go Eventing.