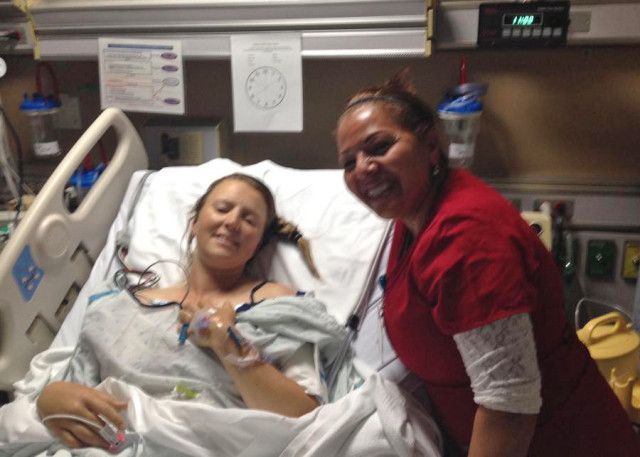 "All is well in New Jersey! Rocking the side braid heading out of the ICU tonight!!! Thanks so much for all the love and support." Photo via Phoenix Equestrian Team on Facebook.

We’re pleased to report that Jessica Phoenix is still on the mend and making great progress as she recovers from injuries sustained in a fall at Jersey Fresh last weekend. We last reported that Jessica had progressed enough to be moved out of the ICU at Robert Wood Johnson University Hospital in New Brunswick, NJ.

Now, it appears that plans are being made to transport her to a hospital back in Toronto, which will allow her to be closer to home.

“We are working on getting her back to (a) hospital in Toronto, but not sure when that will happen,” Jessica’s husband, Joel, told us. “We hope today or tomorrow, but no confirmation yet! She is feeling better and starting to move slowly; she’s making very good progress.”

Jessica broke three ribs and her sacrum, the triangular bone at the base of the spine, in the fall; she also sustained damage to her liver, which was repaired Saturday afternoon in surgery. She was wearing an air vest during the fall.

We’ll continue to bring you up to date information on Jessica’s recovery. In the meantime, please continue to send well wishes to Jessica as she continues her #superwoman battle back to the saddle.

Posted by Phoenix Equestrian Team on Friday, May 15, 2015

[UPDATE 5/15, 11:40 a.m. EST]: The Phoenix Equestrian Team just posted on their Facebook page that Jessica has safely been transported to a hospital in Canada. After a bed opened up, Jessica was flown via air ambulance and will now finish her recovery much closer to home.