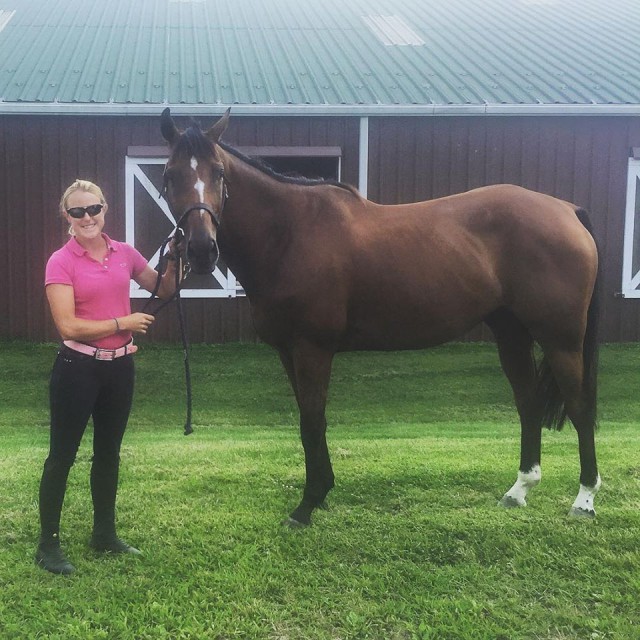 Justine Dutton, “the Other Dutton”, continues to build her business and string of horses at the upper levels with the new addition of Jak My Style, a 10-year-old Thoroughbred gelding, this week. Jak My Style has been campaigned through the Advanced level by Matthew Bryner, most recently completing the Advanced at Millbrook.

Owned by Kathleen Cuca, Jak My Style is a horse Justine clicked with immediately when she first went for a trial ride when Matt brought the gelding to Buck Davidson’s farm. “Buck put the jumps up pretty large and I just really clicked with him,” Justine said. Thanks to the support of Kathleen, who is very excited to own an Advanced horse for the first time, Jak My Style joined Sport Ponies UK shortly thereafter.

Justine will take Jak My Style out for a spin this weekend at the Loudoun Hunt Pony Club Horse Trials in the Open Preliminary and plans to head to Fair Hill to cap off her fall season. “He’ll do the CIC2* at Plantation and Morven and then we’ll aim for the CCI2* at Fair Hill if those go well,” she said. “But we’ll let him tell us if it’s the right time — he’s a great jumper and we’ll do some jumpers to prepare as well.”

The first cross country school aboard her new ride came at Buck’s this past week in a lesson with Burghley-bound Laine Ashker and Anthony Patch. “I knew I was not going to have an easy lesson being with those two!” Justine joked. “But (Jak’s) a phenomenal cross country horse and he did really well.”

“Jak” will now join JollyBo and Huck Finn, owned by Patricia Weiser, on Justine’s string of Advanced horses — an exciting time for Sport Ponies UK as Huck Finn is preparing to return to the Advanced level after spending the majority of the past year sidelined with an injury. Finn is currently on his comeback tour, gradually stepping back up the levels with penciled in plans to return to the three-star level at Fair Hill.

Meanwhile, previously talent spotted JollyBo has stepped up to the plate in her stablemate’s absence, continually improving her dressage work with Justine and aiming for the CCI3* at Fair Hill this fall.

Justine’s certainly come a long way from her days of stunt riding and scraping together rides, but she always stops to pinch herself for the support of her owners, coaches and working students at home. “Everyone is just such great support,” she said. “I will need a lot of confidence coming into Fair Hill with, potentially, three rides, but it’s all coming together really well.”