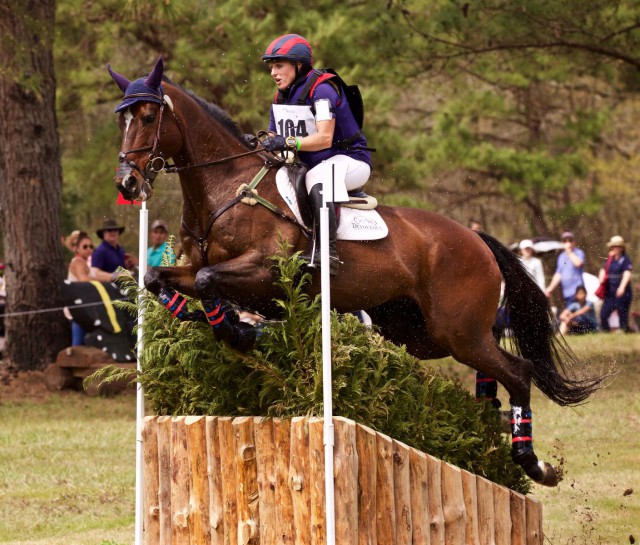 U.S.-based British rider Justine Dutton relocated to the States after college, dabbling in some other careers (including stunt riding!) before deciding to really take a leap and build a business as a professional eventer. Now she’s been named to her first British team for the inaugural U.S. leg of the FEI Nations Cup of Eventing to be held this weekend at Great Meadow.

Representing Great Britain on a team is a goal Justine has had for many years, and she’s had Great Meadow on her radar ever since the announcement came that the venue would host a Nations Cup leg. Campaigning Patricia Weiser’s Huck Finn, Kathleen Cuca’s Jak My Style and her former ride Jollybo at the two- and three-star levels earned Justine many consistent results at the upper levels, plus the opportunity to represent Great Britain.

“I’d communicated with British Eventing via email several times leading up to the announcement,” Justine said. “They told me to go ahead and enter (Great Meadow), and it’s all just happened very fast. This is my first time competing on a team for anything since college — we did team tetrathlon at boarding school, so it wasn’t quite the same thing!”

She’s nominated to the British team with both Huck Finn and Jak My Style, with Huck Finn being the top candidate at the moment due to his lengthier experience at the Advanced level. “I picked Finn because he and I have more experience at that level,” she explained. “Jak is definitely ready to make the step up — he had done a couple of Advanced with his former rider — and I think he’d do a great job, but Finn is the more logical choice right now.”

Justine has been hard at work with coach Buck Davidson, honing her dressage with Finn and preparing for the biggest stage of her career to date. “(Finn) is generally unfazed by atmosphere in general, so I think he will do fine in that ring (at Great Meadow),” she said. “I’ve ridden him for quite awhile and feel I have a solid partnership with him.”

This event will be Justine’s first time meeting her teammates, Jodie Amos, Rosalind Canter and Ben Way. The other team members are flying over from their respective bases in the UK. “It will be really fun to get to hang out with some Brits,” she laughed. “My realistic goal is to put in a solid performance in all three phases. I don’t claim to think that I can be up there with the big names because I’m just not there yet. But I’d like to put in clear jumping rounds and be a solid contributor to my team.”

For Justine, this event is a highlight of her career and an opportunity she certainly wasn’t expecting. “If you’d told me a year ago I’d be riding on a British team, I’d have laughed at you,” she said. “I think this is an amazing opportunity, and you never know what doors these types of events can open. For me, I want to show other people that it is possible to have success even without a lot of money or financial support. I feel a bit like an underdog.”

The weekend will carry additional sentimentality for Justine, who recently lost her grandfather. Her grandparents have been big supporters of her riding career, and Justine will be riding in memory of her grandfather as she represents her country for the first time. “I was lucky enough that he was alive for the announcement to be made,” Justine said. “I’m happy that he got to see a big dream of mine realized.”

EN will be live on-site at Great Meadow this weekend, so stay tuned for much more action from the first U.S. leg of the FEI Nations Cup of Eventing Series! Go Eventing.