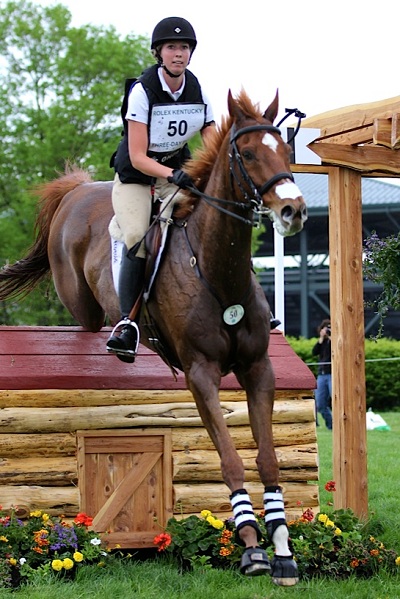 Kendal Lehari is an up and coming rider who first stormed onto the Rolex scene in 2013, placing in the top 20 in their CCI4* debut. Kendal and Daily Edition, a 15-year-old OTTB, went on to be named to the Canadian 2014 Short List alongside established riders such as Hawley Bennett and Kyle Carter. It comes as an even bigger disappointment, then, that Kendal announced on her Facebook on Saturday that she had made the difficult decision to retire Daily Edition.

“On Thursday I had to make the decision to retire Daily Edition. He had been schooling really well and feeling ready to start the 2014 season in top form, but after our first XC school he sustained a soft tissue injury. He is sound and happy and will get to cheer on his buddy Frank as I try to make WEG qualifications on him! Ed is the first horse that I competed in a CCI*** and last spring we finished our first CCI**** at Rolex in the top 20 with a clean and fast XC. He also brought me numerous top 5 placings at the Advanced/CIC*** level and I am currently short listed with him for the Canadian Eventing Team. Ed was a machine XC and it will be hard to match his boldness and love of the sport! Such an amazing horse!”

Kendal will now focus her WEG aspirations on Totally Frank, another OTTB gelding in her arsenal. We would like to express our sympathies to Kendal, as these decisions never come easy, but we rest assured that Ed will be perfectly happy in his new life as a cheerleader. Best of luck to Kendal and her family as they move forward.

Here is some fun footage of Kendal and Daily Edition competing in Indoor Eventing this winter: