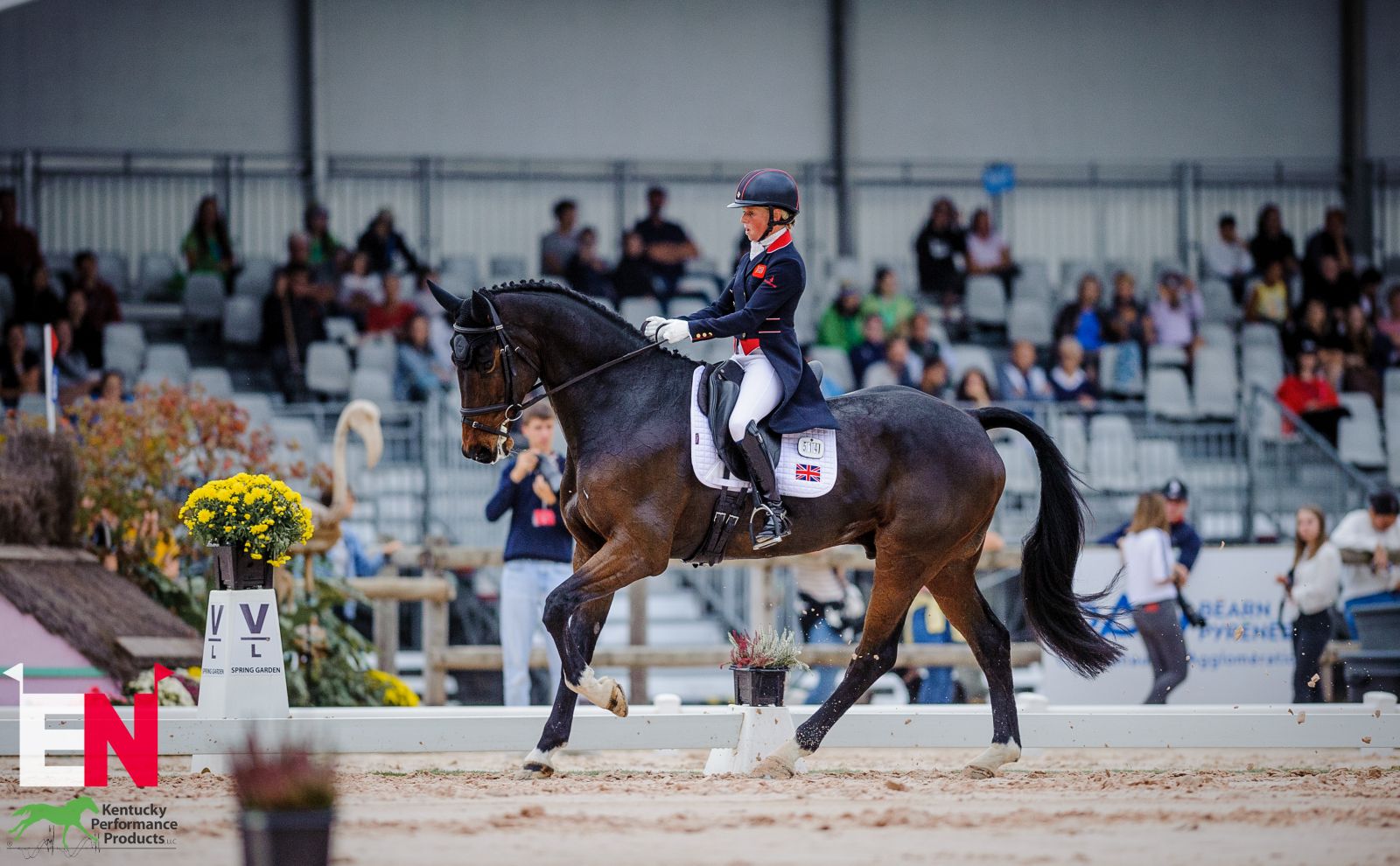 From the tiny men dressed as horses (we’ll get to this, I promise) to the cross-country course that practically enters a Citroen dealership, everything at Les 5 Etoiles de Pau is done in its own unique way — and that certainly includes day one of competition. Unlike other five-stars, which host the trot-up on a Wednesday and dedicate Thursday to dressage, Pau takes more of a ‘bit of column A, bit of column B’ approach to proceedings — and after today’s first horse inspection, we dove pretty well headlong into a short, sweet session jam-packed with the horse-dancing stuff.

This afternoon’s action saw just 17 of the 50 competitors take a turn around the main arena — and along the way, just two would crack the 30 barrier. The lead was held through most of the afternoon by pathfinders Tom McEwen and Braveheart B, but at the very tail end of the day, they were pipped at the post by fellow Brit Ros Canter, who came forward as the last rider of the day and delivered the new leading score with debutant Rehy Royal Diamond.

“I’m absolutely delighted with him,” says Ros, who posted a 27.5 with the eleven-year-old Irish Sport Horse (Ars Videndi x Pegasus Star, by Diamond Lad), who she rides for owner Christopher Makin.

Though the gelding has proven an exciting talent, taking a top ten placing at Bramham CCI4*-L this season, he hasn’t always been particularly straightforward: “He’s not been the easiest to get his brain right on the flat,” explains Ros. “He just has a game, and goes on a bit of a jolly — like, ‘look at the crowd!’ He’ll change when he’s not supposed to do, or miss a change when he’s supposed to do one, and waggles around in his halts and jogs in his walks — he’s just a jolly fellow!”

Coming to a long-format event gives the gelding a chance to settle into his environs and perform at his best, she explains: “We need a three-day; his one-day results aren’t anything to go on, because he just needs to be in a place for a bit longer and get a bit bored by it.”

Getting a clear round in the ring was the goal of the day, and although Ros is realistic about her expectations for the week, it’s a starting point she’s very happy with.

“He pulled up completely mistake-free, which is pretty much unheard for him, so that’s great stuff,” she says. “[The highlight] was the way he just stood in his halts with his head so still, because that’s what we struggle with the most, and it’s quite a difficult thing to train with a horse, and it’s just a bit of a habit for him. So just the rideability in a change, and the fact that I could have my leg on all the way is a massive improvement for him.”

Now, both horse and rider will enjoy a ‘day off’ to prepare for Saturday — and once again, Ros is looking to take it one step at a time, always keeping the future in mind.

“It’s a bit of a fact-finding mission,” explains Ros. “I have no doubt about his scope and ability and generosity — it’s just that his build and shape mean that sometimes he runs out of balance, and he’s very long-striding. I’ve struggled in the past, towards the end of the course, to hold him — not because he’s wanting to gallop off with me, but because his length of stride gets a bit too big and I have to overcompensate and slow down quite a lot. So I’m fairly realistic: if we have a great experience, that will do for us. It’s just a case of, I’ll go as fast as I can, but hopefully in a safe way so that he comes home enjoying the experience.” 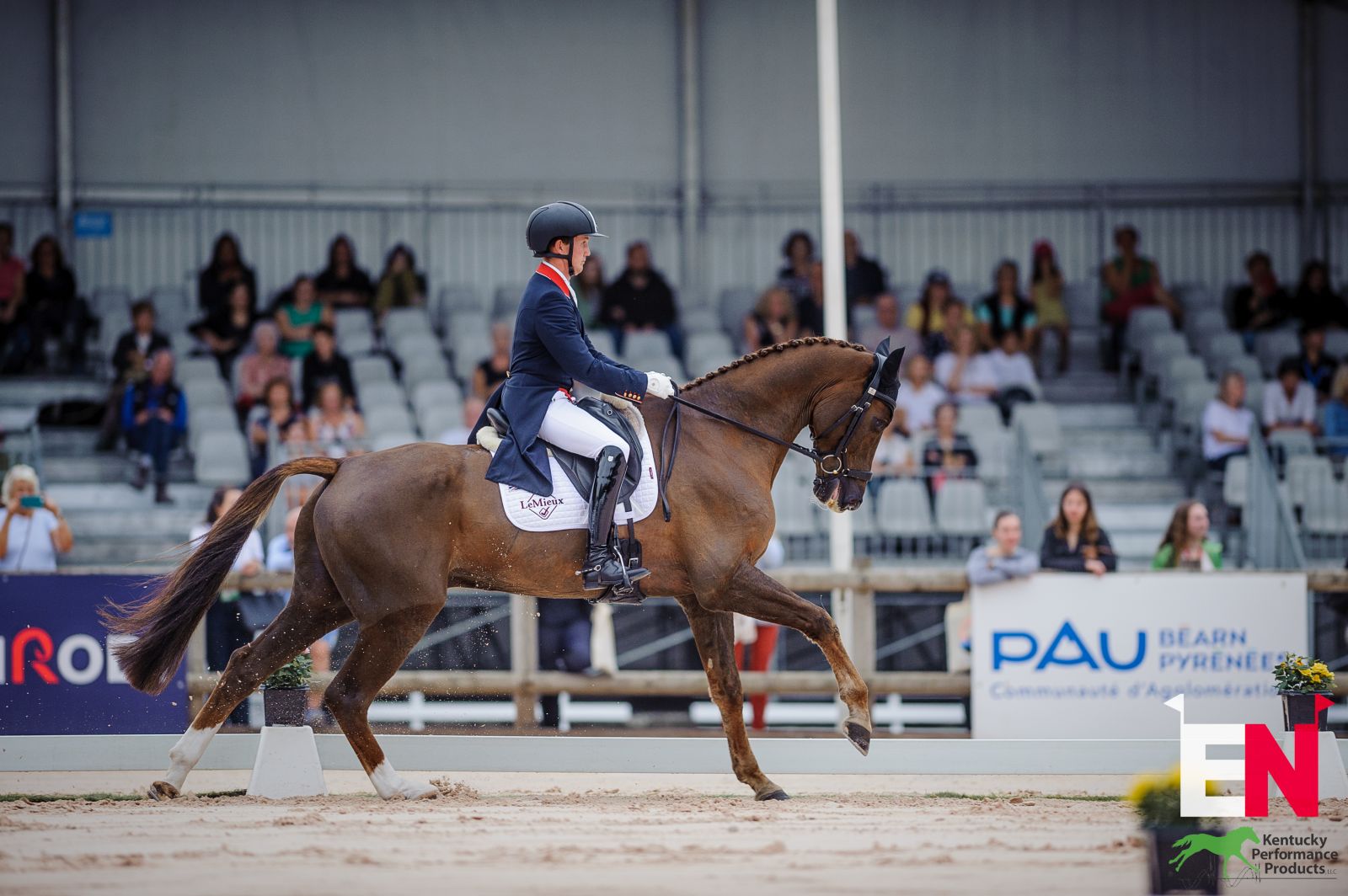 Pathfinders Tom McEwen and Braveheart B hold the lead for much of the day, but relinquish it at the eleventh hour. Photo by Tilly Berendt.

Though Tom McEwen was usurped from top place with Braveheart B, his first of two rides, he didn’t slip by much: the pair’s 28.3 sits them in second place, just eight-tenths of a penalty behind the leaders going into the second, fuller day of dressage. For the twelve-year-old Irish Sport Horse (Radolin x Buenos Aires, by Heartbreaker), it’s the first time breaking the 30 barrier since 2019, when he did so in the CCI3*-L at Tattersalls. At four-star level, he’s been a pretty consistent mid-30s scorer — but although today’s tidy test undoubtedly earned its final score, Tom’s assessment was that it was on much the same par as his previous five-star performance at Luhmühlen back in June.

“He went really well at Luhmühlen, going in early, and actually, he produced a really similar test there,” says Tom, who scored a 31.6 on that occasion. “He did as well as he could do and tried as hard as he could, and all we can ask for is for them to try as hard as they can.”

Still, though, he was delighted to tick every box in the ring with the rangy gelding, who’s owned by Barbara Cooper.

“The changes, for him, would be highlights — they can be a little small compared to the others, but for him, they’re very nice,” he says. “There’s some nice work in there — he can hide a little bit behind the vertical at some points, but overall, he showed a really nice test and outline and gave us a solid, safe clear round.”

The trick to coercing a competitive score out of the gelding hasn’t been any magic button solution, he explains, but rather the long, slow process of building him up with correct foundations. Getting to school him in unique atmospheres, too, has been a blessing — which meant that his early trip to France, accompanying Tom’s ride in the Seven Year Old World Championship last week, paid dividends.

“It’s all coming; it’s just his strength. He’s taken a bit of time,” he says. “He actually came to Le Lion with us last week, and that was really good for him — just seeing the atmosphere, and working on the surfaces, which at Le Lion, are a bit softer than what you’d expect at Pau. So just getting him working through his body and running through the tests around other horses; it’s one thing doing it at home and another thing doing it a show.” 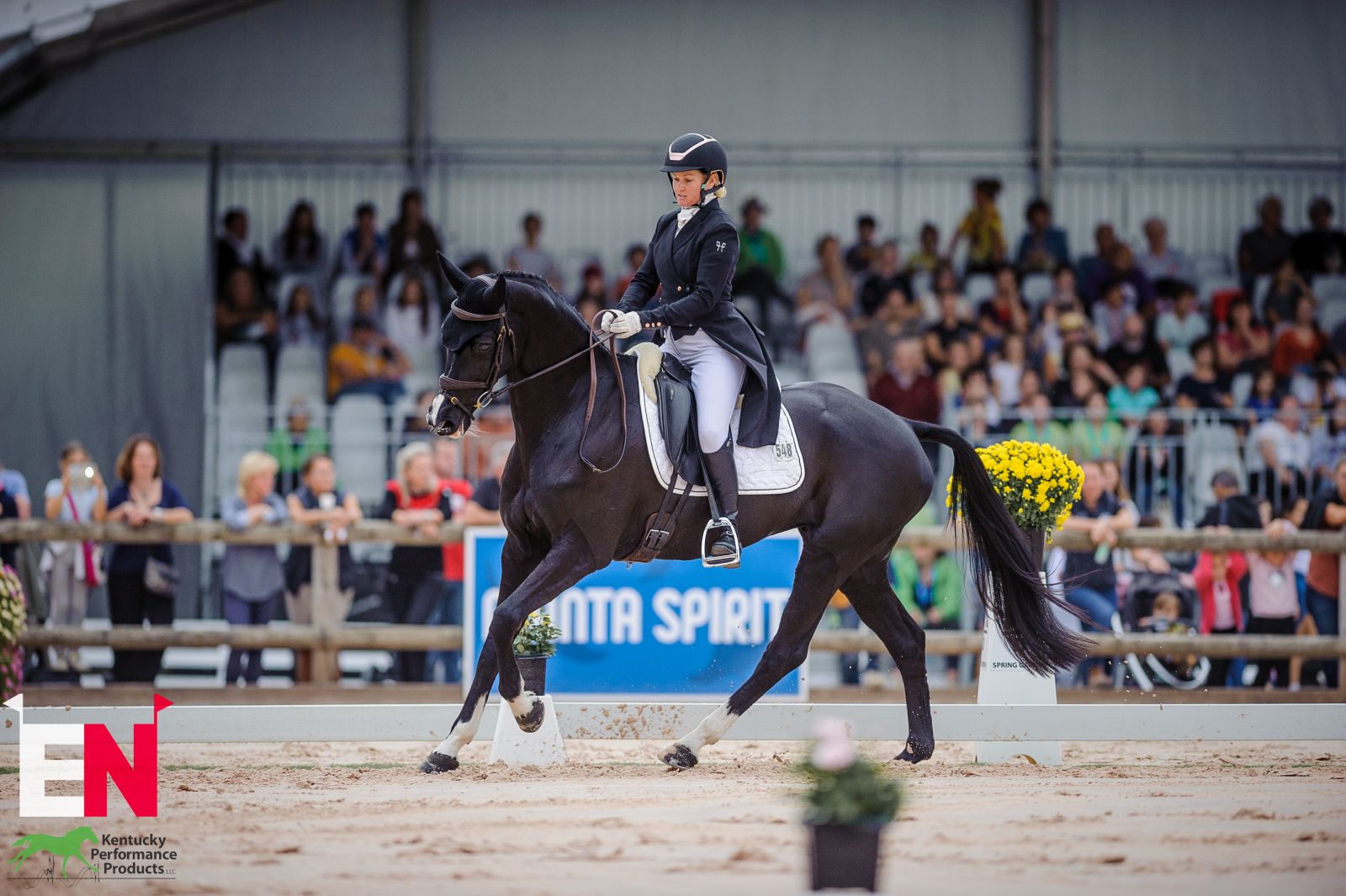 Less than two weeks after her husband, Tim, won Maryland’s CCI5*, World Number Two Jonelle Price put herself in a competitive early position, taking provisional third place with the diminutive, expressive Grappa Nera on a score of 30.1 despite mistakes in the changes. That’s a considerable upgrade from her previous five-star score of 35.6, which she earned at Kentucky last year — but, as Jonelle explains, she’s not been the easiest horse to produce.

“She’s been a bit of a livewire, but it feels like there’s a light at the end of the tunnel,” she laughs. “The changes aren’t quite there yet, so you don’t expect to magically go and pull them off, but to sit on a thirty with four bad changes reflects on the quality of the rest of the work, so when — if! — I can get it, it’ll be good.”

Like Ros’s ride, Grappa Nera is at her best when she’s able to settle into a new location, and her best scores — such as the 30.5 she earned at Strzegom CCI4*-L in 2020, which ultimately helped her earn second place — have come at long-format events.

“She regularly does a 50 at a one-day — she’s a true three-day horse,” says Jonelle. “She needs to work and she needs to settle into an environment, but she is eleven, so she’s growing up a wee bit, hopefully, so hopefully we’ve got a few good years ahead of us.” 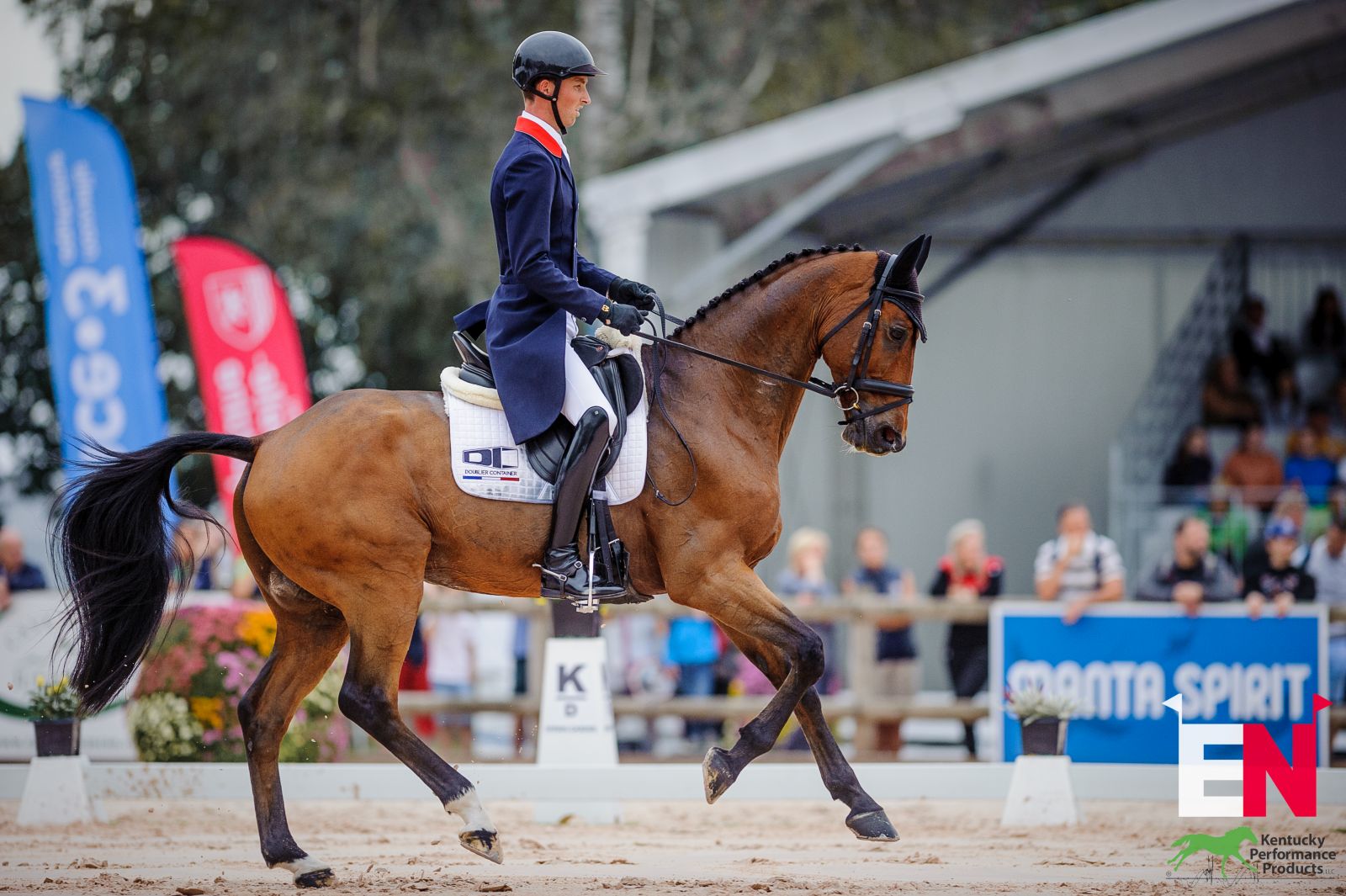 Gireg Le Coz and Aisprit de la Loge dance their way to a day one top five despite some disappointing moments. Photo by Tilly Berendt.

France’s Gireg le Coz leads the way for the home nation after putting a 30.4 on the board for overnight fourth place with Aisprit de la Loge — but the expressive twelve-year-old Selle Français gelding (Quppydam des Horts x Image de la Loge, by Dollar du Murier) has so frequently been a mid- to high-twenties scorer, including at Badminton this spring where he earned a 26.7, that Gireg couldn’t help but feel the sting of disappointment after his test.

“I’m not really happy,” he says. “I think he was feeling very good in the warm-up and good in there — there were just some uncharacteristic mistakes that normally doesn’t happen with him. I had a nice feeling when I started, and then there were just a few little mistakes in the canter. I don’t really know why, so I’m disappointed.”

Disappointed though he may be, it’s never over until it’s over — and Aisprit de le Loge, with his short-coupled build and easy manoeuvrability, is a horse who’s made for Pau, as he proved when winning the now-defunct CCI3*-S here back in 2018. 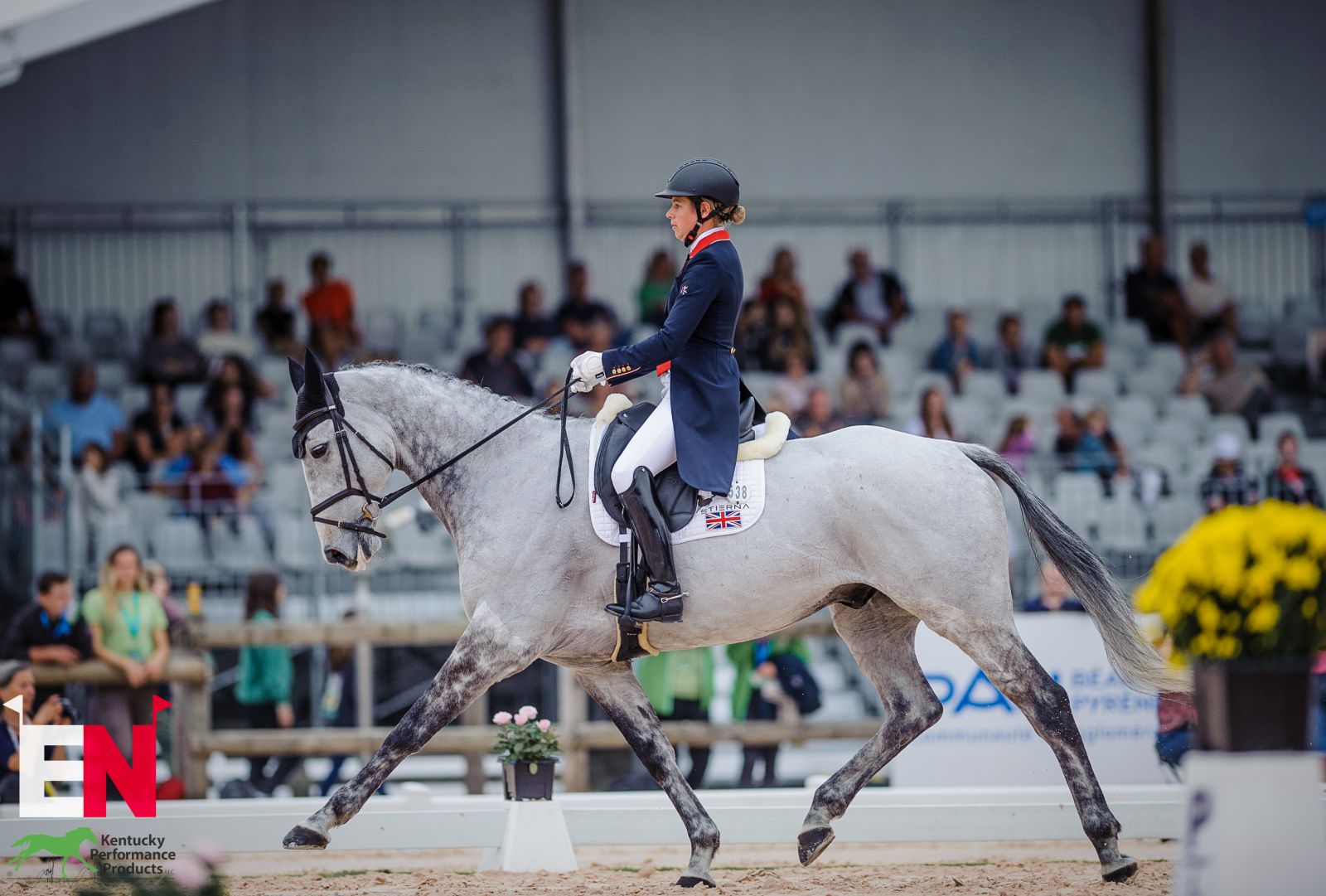 Izzy Taylor rounds out the top five overnight on the first of her two rides, the five-star debutant Happy Times. At just ten years old, the British-bred Sport Horse is among the least experienced horses in the field, but he delivered a mature, promising performance to earn a 31.7, just losing a minor smattering of marks in the second flying change and the stretchy canter circle.

“I think did the best he can do with where he is at the minute,” says Izzy. “He’s a first-time five star horse with not a lot of mileage, and he came and did everything. He had a clear round, basically.”

Time, too, has been key with Happy Times, who has had to learn to carry himself in balance but has, this year, picked up promising placings as a result, including fifth place in the CCI4*-S at Burgham.

“He’s lovely, but he’s quite a big horse, so there’s a lot of him to manoeuvre and he’s actually very bendy, so actually translating that to having the legs in the right place… he wants to do it right, and then he gets into it and he can’t,” says Izzy.

Tomorrow sees us dive headlong into a fully-stocked day of dressage, with 33 tests to be performed from 10.00 a.m. local time (9.00 a.m. British time/4.00 a.m. EST), with Australia’s Kevin McNab and Willunga first in the ring. As always, you’ll find all the biggest stories of the day right here on EN — so tune in for all the news that’s fit to print. Until then: Go Eventing!

The top five after day one’s first (short!) day of dressage at Pau.