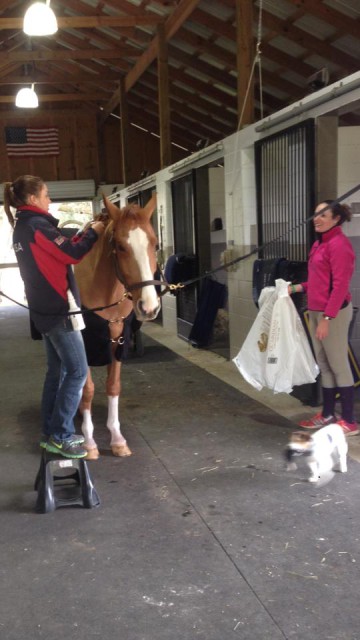 Czechmate getting beautified for the weekend. Photo via Lauren Kieffer Eventing on Facebook.

Show jumping has just concluded for the Open Intermediate division at the Ocala Horse Properties Winter I Horse Trials, and overnight leaders Lauren Kieffer and Czechmate were able to seal the deal on their first win of the season with a double clear round.

Marc Donovan’s course looks like it was a good pipe opener for the horses, with eight out of 14 horses jumping double clear. Marilyn Little and RF Scandalous held onto second place with a double clear round, and Bailey Moran and Loughnatousa Caislean moved up from fourth to third overall.

Second place went to Kylie Dermody and Da Vinci Code, one of the rides she took over from Ashley Adams last year. Kylie and Da Vinci Code moved up from fifth to take second after finishing on their dressage score of 32.4, just two points behind Buck.

Rounding out the top three are Marilyn Little and RF Quarterman, who also enjoyed a nice move up from sixth to third.

The Horse Pesterer is out and about this weekend, and he uploaded dressage and cross country videos to his YouTube page. Check out a few of the videos here, and visit his YouTube page to see the rest: