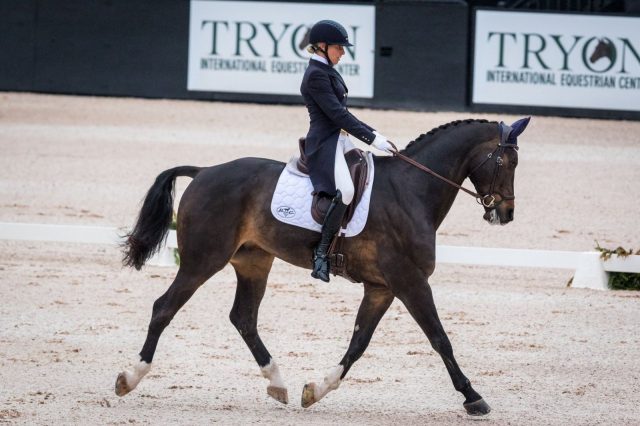 In an extension of her dominance at Carolina International two weeks ago, Liz Halliday-Sharp owns the top two CCI4*-S spots after dressage day at The Fork at Tryon International Equestrian Center. Carolina winner Fernhill by Night is out front again by a healthy margin, having scored a 24.8 in what Liz called “the best test Blackie’s ever done in his whole life.”

“Blackie,” a 16-year-old Irish Sport Horse (Radolin x Argentina XII, by Argentinus) owned by Deborah Halliday, now has six career international victories to his name and has won his last two international starts. Could he go three for three this weekend? Certainly, he’s off to a roaring start.

“I was totally over the moon thrilled with him,” Liz says. “He didn’t drop me, like he usually does – he’s normally the world’s laziest horse. I think we’ve finally gotten our warm-up down this time, and I think he really enjoyed himself.”

Liz explains that Blackie is “not your normal event horse” and requires a unique preparation.

“Really with Blackie it’s just getting him as hot as you can possibly get him,” she says. “We keep everything down to a really small amount of work. Like yesterday, I rode him in the jump saddle and cantered him around the ring a bit in the morning, and that was it, and then I rode him for literally 10 minutes, I think, and just picked him up and got him really hot, doing some passage-piaffe steps and working on the pirouette canter so he can really, really sit. So then when he goes in the ring it’s easy, and you just open him up into something he finds easy.” 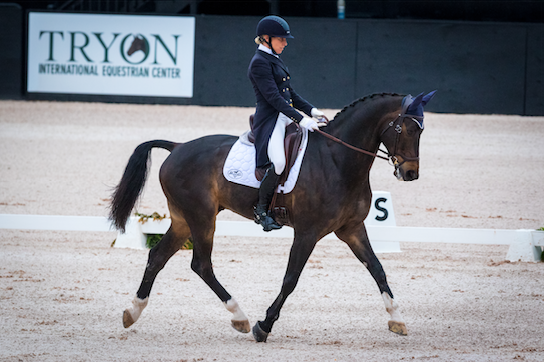 Before today’s test they did a maximum of 15 minutes in the warm-up, Liz says. He got walked in the morning, breakfast aplenty, and some electrolyte paste which Liz thinks gave him a boost. The unorthodox routine clearly agreed with the horse and paid off in their performance.

“It was probably the first time that I haven’t had to work really hard in the canter,” Liz says. “I’ve been able to just sit there and feel like I have the hind legs and just enjoy it, and just put him through the movements he does so well. I think the score reflected that, and I was hoping when I came out of the ring that the score would be sub-25, and I don’t always think that. I really felt the horse couldn’t have given me more today, so I’m really pleased with him. He was a good boy.”

With a mere seven-tenths of a point separating the second through seventh places after dressage, it’s a tightly packed top of the leaderboard. But Liz and Blackie have 5.3 points in hand heading into the weekend’s jumping phases. 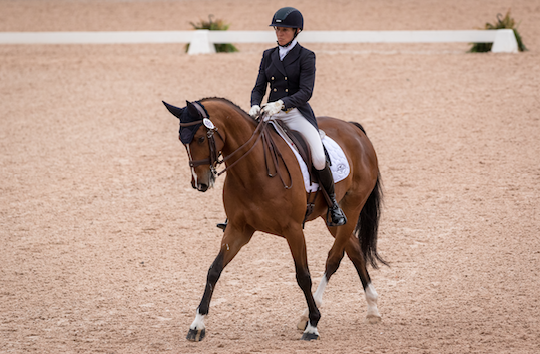 “I think Deniro did a lot of great work,” Liz said. “His first halt was off but the other two were very good, so that’s been an improvement from Carolina. The changes were a mess, but he’s just gotten himself in a little bit of a tizz with those on the serpentine, and that just is what it is. It’s a work in progress, like it always has been. So that was disappointing, because I think he easily would’ve been in the 20s without two very low marks.

“I actually sort of thought he would have been in the 20s anyway, because I thought the rest of his work was really, really nice, and had a lot of flow, and I actually thought it was a better test than at Carolina, but different judges see different things. It’ll be interesting to see what the marks are on paper, but obviously I’m pleased for him to be in second. I think he’s just going to keep getting better, and he’s still young,” she said.

As with Blackie, Liz is sensitive to the different needs of different horses in the warm-up. At Carolina, Liz says, she felt like she “overcooked” Deniro a bit, perhaps asking him for too much push from behind.

“This time we went for a little bit more relaxation and I think overall had a better test than at Carolina, minus the two very big wobbles,” she says. “I also rode him in the double today, which was good —  I haven’t ridden him in that for a while. I think he was just a little bit lighter and softer through everything.”

Liz has Deniro pointed at Kentucky, his second start at the level after finishing 8th at Luhmühlen last year. “I haven’t quite figured out what we’ll do for Kentucky yet but yeah, we’re getting there,” she says. “Just trying to keep him from getting himself wound up about the flying changes, because I think he overthinks it too, so we’ve just got to keep relaxing a bit.”

The CCI4*-S continues with show jumping on Saturday and cross country on Sunday. Liz describes the Captain Mark Phillips designed course as “proper” — look for a preview on EN first thing tomorrow.

“I think it’s up to height and substantial, and there are some big questions,” Liz says. “I think there’s a lot to jump, and I’m guessing the time will be tight enough, because there’s quite a few questions that need a little bit of respect, and it was pretty tight last year as well. Obviously, on the undulating ground it does make the time add up, but I think this rain today will make the ground pretty good and hopefully very good. It’s always a big atmosphere in this ring to show jump as well, so we’ll just go in and do our best, really.”

Like many of the riders contesting The Fork in preparation for Kentucky this weekend, Liz is viewing The Fork as a final prep — not a finish line. “Obviously, I want to jump clear both days!” she says. “But for Deniro my plan is very much focused on Kentucky now – I wouldn’t say I’m going to go out and be very slow, but I’m not going to go out and be like a mad person. Most importantly I want that rideability and take jumps out of stride that can come out of stride, and just kind of focus on that game plan looking ahead to Kentucky.”

Blackie, on the other hand, isn’t headed to Kentucky, so we’ll expect them to step on the gas. “Blackie goes to every event trying to win – that’s all we do with him now,” Liz says. “He’s 16 now and doesn’t run a lot, so we’ll give it my best shot. I think it’s a strong cross country, from what I’ve seen. I think he’s up to it, and feeling the best he’s ever felt in his life. So we will try and jump clear on both days and keep kicking.” 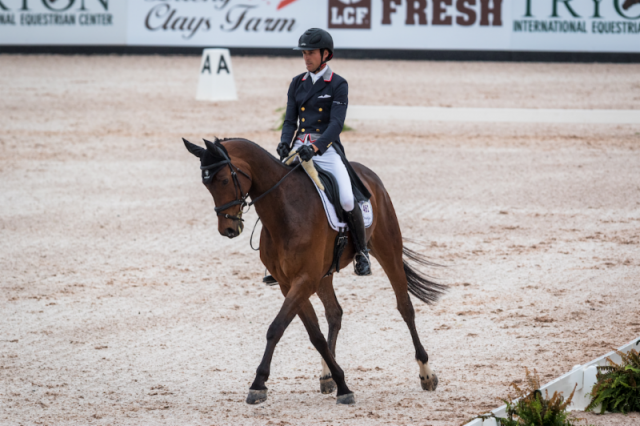 In equal 3rd place on a score of 30.2 is Felix Vogg and Colero, an 11-year-old Westphalian gelding (Captain Fire x Bonita, by Bormio xx) owned by Vogg Jürgen. The Swiss Olympian and two-time World Equestrian Games competitor also has big plans for the last weekend in April.

“I think he has good dressage form because he’s doing so much fitness work for Kentucky,” Felix says. “We have to get better in dressage, and ride a few different tests so he gets used to being in the ring and used to the tests. He’s good outside when it’s more relaxed.”

Looking ahead to cross country, Felix reiterates that his goal is to get Colero as prepared as possible for the horse’s CCI5*-L debut. “It is good to ride a course like this before Kentucky,” he says. “There are not as many turns, but there are a lot of questions, so you have to be quick in the head, and the horse has to be quick in the head, and you don’t get a long break in between so it’s good. I will ride to give him a good feel that it’s all getting done as it should be done.” 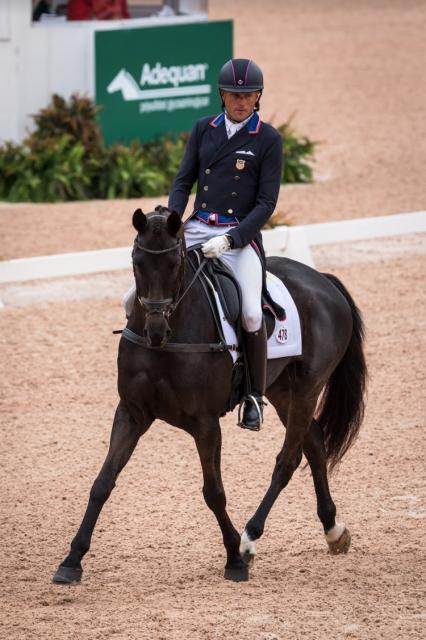 Boyd Martin and Tsetserleg, a 12-year-old Trakehner gelding (Windfall x Thabana, by Buddenbrock) owned by Christine Turner, share the no. 3 spot with Felix and Colero.

“The test was pretty good,” Boyd says. “It doesn’t suit my horse that much, but to be honest it’s great to be able to get in here in this stadium. Like I said yesterday, it’s a wonderful preparation for Kentucky because the horses do get nervous in a bit of atmosphere and practice going down the center line.”

Boyd also has Tsetserleg aimed at Kentucky, along with Long Island T (who is leading the Advanced division — see our recap of that division here) and Ray Price, who stayed home after winning the Open Intermediate horse trials at Morven Park last weekend.

“I think my guy’s in good shape,” Boyd says. “He’s working well, and there’s just a couple little technical things we messed up, which I’m not too worried about because I haven’t really been focusing on this test at all. I just learned it yesterday, but I think we’re in good shape to put in a smoking hot test come Kentucky.”

As for Boyd, who broke his collarbone on Feb. 2 while fox hunting, he reports that he’s feeling back to form as well. The injury abridged his season a bit, causing him to sit out Carolina.

“Yeah, it’s been a bit of an interesting winter for me,” Boyd says. “I broke my collarbone early and then to be honest at Red Hills I hurt my back and had to get that treated the weekend of Carolina, and so it’s been just bouncing around trying to get myself in good shape. Luckily now I feel pain-free and healthy probably for the first time this year, which is a relief. It’s a horrible experience riding horses every day when you’re in pain because you can’t really do a good job of it. So my collarbone is perfect and I’ve got my back fixed up and I’m fighting fit and feel good. I’ve come good at just the right time.”

Looking ahead to the Fork cross country on Sunday, Boyd says, “Everyone is having a laugh at me this weekend with Tsetserleg and saying, ‘How are you going to ride that water jump?’ And I simply say I’m going to completely do everything I didn’t do last time!

The Fork at TIEC continues Saturday with cross country for Modified, Novice, Training and Beginner Novice Divisions, as well as show jumping in the CCI4*-S, CCI3*-S, CCI2*-S, Advanced, Intermediate and Preliminary divisions. Much, much more to come. Stay tuned! 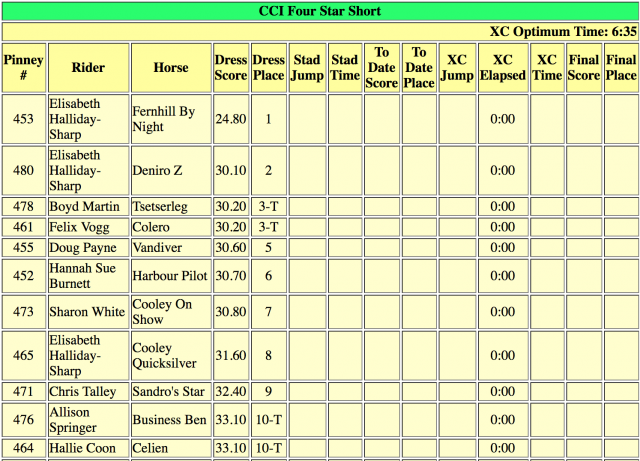