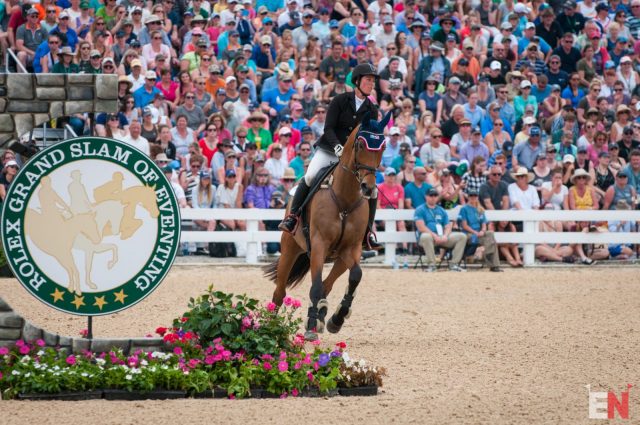 Editor’s Note: EN has been informed by Equestrian Events, Inc. that the raising of $400,000 does not guarantee the viability of this year’s event. The necessary amount, EEI executive director Lee Carter says, remains at $750,000, but securing $400,000 would be helpful in moving forward. The donations will be presented to the EEI Executive Committee tomorrow and more updates will be provided as they are made available. We have made some corrections to the following text to remove any unintended misinformation.

Just over 12 hours remain until the fundraising deadline for the effort to save the 2021 running of the Land Rover Kentucky Three-Day Event, and organizers Equestrian Events, Inc. this morning released an update that just over $90,000 has been raised to date by grassroots donors. According to Sara Kozumplik Murphy, who has been heading up much of the fundraising charge, there are also larger amounts that have been pledged by a network of owners and other eventing supporters this weekend. The original fundraising goal has been set at $750,000.

“The grassroots effort that has happened the last few days has been really, really cool,” Sara commented in an update video this morning. “I have been told that it is possible for Kentucky to feel like they can run if we have $400,000 today. There’s a lot of different things that can be done with sponsors and donors and people that have supported our sport for a huge amount of time in a lot of ways and who have supported the Kentucky Horse Park in a lot of ways.”

There are many moving parts at work within this complicated situation. Equestrian Events, Inc. released a Q&A answering questions that donors may have. We also encourage you to read the well thought-out opinion-editorial penned by Ocala Jockey Club owner and president Pavla Nygaard that was published yesterday outlining the exorbitant costs of running an event as well as ideas on future sustainability.

“Now is the time to see if we can just figure it out,” Sara said. You can make your donation to Equestrian Events, Inc. by clicking here.