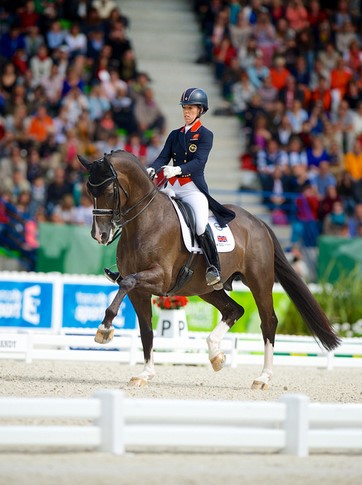 The BT Sport Action Woman of the Year nominations are out, and dressage darling Charlotte Dujardin is one of 10 finalists for the year end award. Eventing great Lucinda Green will also be honored at the awards ceremony, and she’s jumped aboard the Valegro wagon as the public vote draws near.

The national television show in the UK is hosted by Claire Balding and will broadcast the results of a public vote for the Action Woman of the Year, among others. The nomination for this award carries significance for Charlotte, who said that “it is also great for the sport we love to be recognised in the mainstream … This would open up channels for investment which would be great for the next generation and this is so important to me.”

Lucinda Green has voiced her support of Charlotte and all of her and Valegro’s achievements, saying “Charlotte has that feel through her bones and being of how to bring out in a horse when she’s riding him what he can naturally do when free in a field. She can give a horse the balance, confidence, trust and understanding, gradually over the years, to be able to perform these different movements exactly on request.”

Host Claire Balding is also thrilled to have equestrian sport represented in this year’s awards. “Just three years ago, when I was asked what the ‘dark horse’ of London 2012 would be, I said ‘dressage’. The men on the panel all laughed,” she said in a British Eventing release.

The BT Sport Awards will air on December 10 for all of the UK readers. Voting is live now, and you can vote for Charlotte by clicking here.