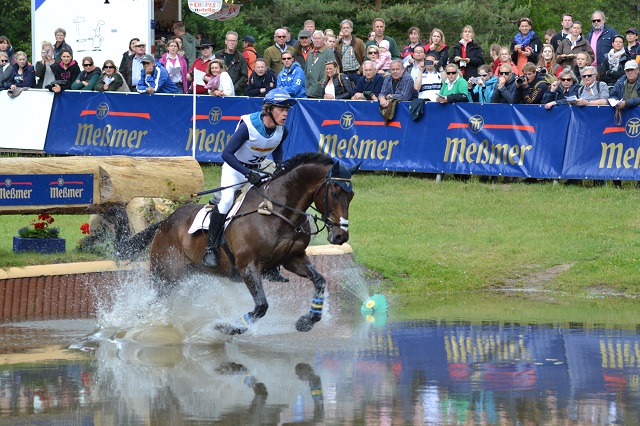 In a surprise twist, Michael Jung relinquished his lead in the FEI Nations Cup Strzegom CICO3* in Poland. Both fischerTakinou and fisherRocana FST picked up a handful of time penalties on cross country today to drift into second fifth place respectively.

Michael said in the post-ride interview that the ground was “not perfect” and the weather hot and dry, so he intentionally did not push the horses. He’s listed on the German Olympic Team short list with fischerTakinou, fisherRocana FST and La Biosthetique Sam but revealed that he feels 9-year-old fisherTakinou is his mount for Rio.

The margin between first and second is very slim, and while Ludwig Svennerstal and the very experienced King Bob were quick and fast around a course which caused no shortage of trouble, they only hold the overnight lead by 0.1 points. Italy’s Pietro Sandei and Rubis de Prere were just one second over time and moved into the top three.

The real shakeup came in the FEI Nations Cup team standings, as Great Britain shot from fourth to first. Both Rosalind Canter (best equestrian’s last name ever?) with Allstar B and Izzy Taylor with KBIS Briarlands Matilda were double clear while Laura Collett and Cooley Again added only 3.6 time, moving the three pairs up the leaderboard and giving Great Britain a small advantage heading into show jumping on a combined team score of 156.6.

Italy is hot on their heels with a combined team score of 157.9. The gap then to third is wide, with Belgium moving up from sixth to third on a team score of 230.7. Although they dropped out of the top three, the three-person German team is not out of podium contention with a post cross country score of 232.0. Sweden, second in the Nations Cup after dressage, saw two horses withdrawn before the start of cross country, which took them out of the team competition.

The CCI3* cross country has just wrapped up, dressage leaders Stefano Brecciaroli (ITA) and Roulette B picked up some time to fall to third. The remainder of the new top six posted the day’s double clears, and Belgium’s Hugo Laschet and Omega de Gravelotte became the new leaders.

Click here for ride times, orders of go and live scoring from Strzegom.