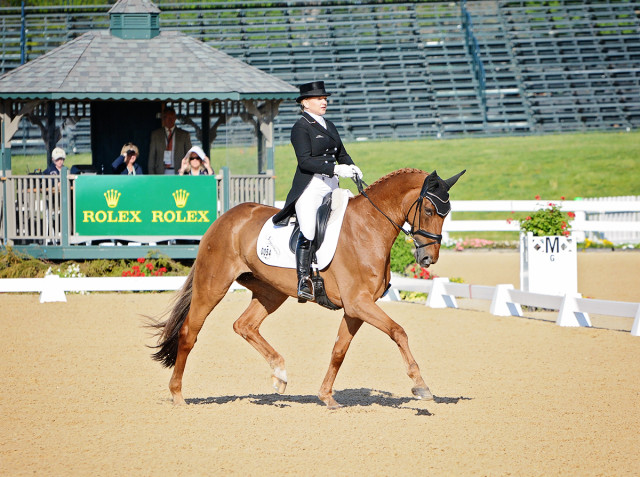 Michael Jung is still holding onto his hefty lead with fischerRocana FST at the day two lunch break here at the Rolex Kentucky Three-Day Event, but Marilyn Little and RF Demeter managed to chip away at that margin a bit with the best four-star performance of their career.

“Demi,” a 14-year-old Oldenburg mare owned by Jacqueline Mars, Raylyn Farms and Patrick Witte, put in a lovely, fluid test with Marilyn to score 42.3, with slots them into second place with two more groups still to come this afternoon.

Marilyn opted for a different preparation for Rolex this spring, only running Demi at the Wellington Eventing Showcase and then two Intermediate events before coming to Kentucky. Her theory was that the mare would feel more rested and better able to perform her best in the sandbox, and it definitely seems that the strategy is paying off so far.

Samantha Clark is ringside interviewing the riders after their tests, and we’re uploading those and posting the links in the open threads throughout the day. Click here to listen to Marilyn’s comments after her test, and click here to catch up on all of Samantha’s interviews from yesterday. 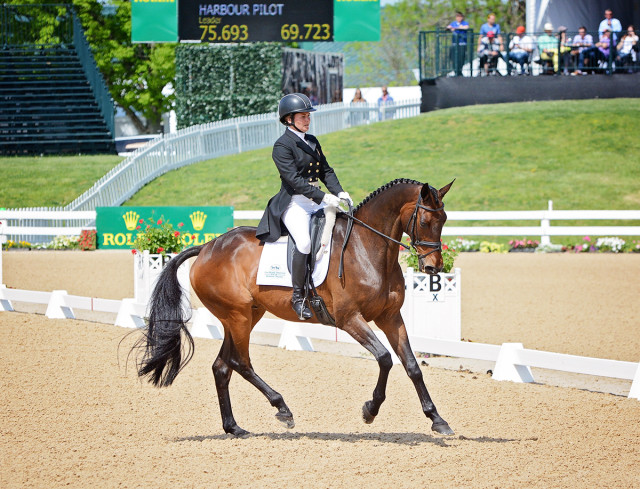 Liz Halliday-Sharp and Fernhill By Night and Phillip Dutton and Fernhill Fugitive, who sat second and third after the first day of dressage, were bumped down one spot and now sit in third and fourth places on their scores of 43.0 and 43.1, respectively.

Hannah Sue Burnett and Jacqueline Mars’ Harbour Pilot joined the top five thanks to a nearly mistake-free test that scored 43.2. “William,” a 13-year-old Irish Sport Horse gelding, definitely put on his dancing shoes this morning, and he looks fantastic in his first four-star start since Burghley in 2014.

Maya Black and Doesn’t Play Fair, another pair that did their test yesterday, are now sitting in seventh place on 45.5. Matt Brown and Super Socks BCF have taken over the title of Top Rolex Rookie so far thanks to scoring 46.5, which has them in eighth place.

“Flaxen,” a 10-year-old Irish Sport Horse gelding owned by the Blossom Creek Foundation, kept his composure perfectly through the test and then gave the crowd a bit of excitement after the final halt when the applause wound him up. He looks more than ready to tackle the first cross country course of his career tomorrow.

We have two Thoroughbreds rounding out the top 10 currently. Buck Davidson and Petite Flower were the second pair out this morning, scoring 46.7 for ninth place. The 14-year-old mare owned by Caroline and Sherrie Martin will look to improve on her 14th place finish from Rolex last year. 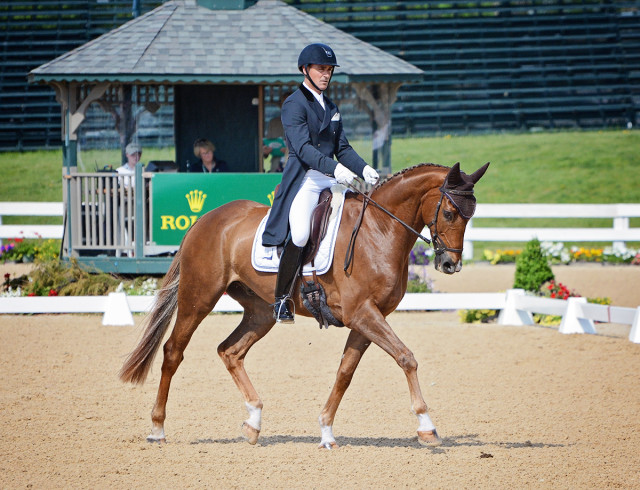 Holly Payne Caravella is no stranger to Rolex, but her 13-year-old partner Santino is making his first four-star start this weekend. “Sonny,” owned by Bethann Groblewski, put in a super performance to hold 10th place on a score of 46.8.

We had one withdrawal just before the lunch break when Lisa Barry pulled F.I.S. Prince Charming from the competition. “His feet are just a bit too sore after the hard footing we’ve had for the last couple of weeks,” Lisa wrote on her Facebook page. “Although we could make him happy enough to get through the dressage, I don’t think it’s in his best interest.”

We still have 15 more horses and riders who will try to catch Michael Jung’s leading score of 34.4. So far no other combinations have managed to break into the 30s, but we have multiple heavy hitters still to come who are capable of catching those numbers. 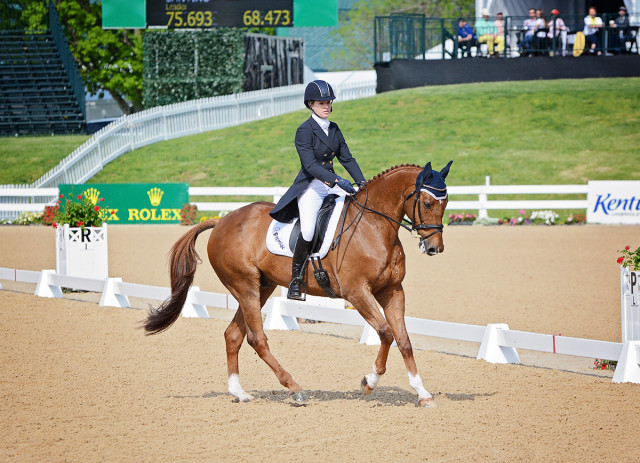 If you missed any of the morning’s action, be sure to relive it in Sally’s open thread. Click here to open the afternoon open thread. Remember you can watch the competition live on USEF Network and FEI TV.

Sinead Halpin (12th with Manoir de Carneville) and Selena O’Hanlon (23rd with Foxwood High) both gave fantastic interviews to Samantha after their tests, so be sure to listen to those here and here. Catch up on all of EN’s #RK3DE coverage at this link, and check out more photos on the morning on Instagram. Go Eventing! 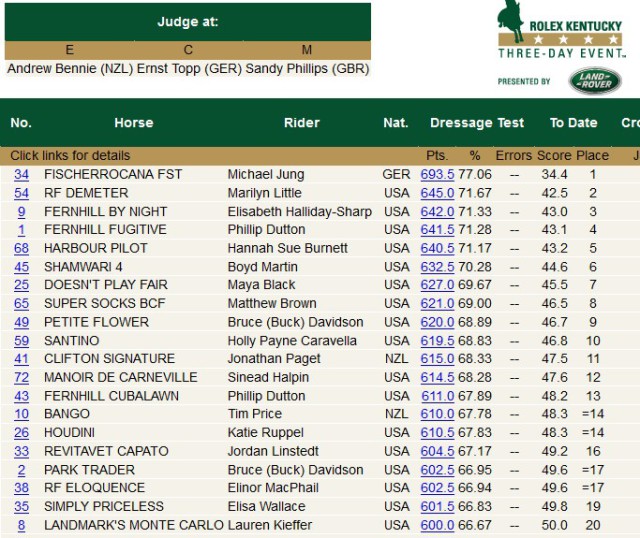