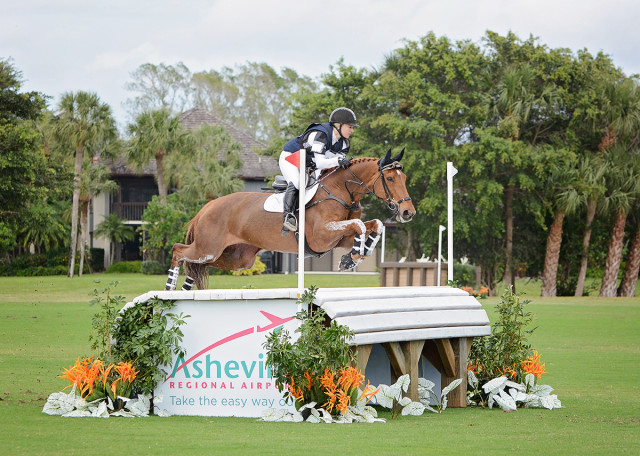 Aside from a run in the Wellington Eventing Showcase in January, we haven’t seen Marilyn Little competing at any horse trials so far this year. That’s because the 2015 Pan American Games individual gold medalist is taking a slightly different path to the Rolex Kentucky Three-Day Event, and we caught up with Marilyn to learn more about her strategy.

Generally East Coast-based horses and riders aiming for Rolex will run at some combination of Pine Top, Red Hills, Carolina International and The Fork. For RF Demeter, the 14-year-old Oldenburg mare owned by Raylyn Farms, Jacqueline Mars and Patrick Witte will only run at the Intermediate level at both Rocking Horse this weekend and the Ocala Horse Properties International Three-Day Festival of Eventing next month before heading to Rolex.

“I have a different approach with Demi this year. I’m very lucky in an Olympic year to have a horse that is so sound and so physically well,” Marilyn said. “She’s won quite a lot of CIC3* events, so I could have taken her back to Carolina and The Fork. But when I look at my record, my best dressage scores have been at events where I backed off a little bit and let her body be as good as it could be coming into the event. She’s at her best when she feels rested.”

Demi is a very experienced cross country horse — having now completed 11 events at the CCI3* and CCI4* level — and Marilyn said she used the outing at Wellington as a test case to see if fewer runs this winter and spring might benefit the mare in the lead up to a CCI4*.

“I went quickly with her at Wellington, and I wanted to know how sharp she could be after a rest. Could I trust she would show up and be the horse you’d want leaving the starting box of a major event? I rode her like it was a crucial cross country round, and she came up with an answer to every question I asked her. She was quick, sharp and very honest, so that indicates to me that her cross country won’t suffer by backing off a little.”

Marilyn has also focused on fine-tuning Demi’s dressage and show jumping over the winter, as well as schooling “mini cross country courses” as part of the mare’s fitness work and to keep her on her toes to questions like water and banks. “I’m trying to eliminate competing just for the sake of competing from Demi’s spring schedule.”

As for her Pan American Games partner RF Scandalous, the 11-year-old Oldenburg mare owned by Phoebe and Michael Manders, Jacqueline Mars and Robin Parsky has fully recovered from an injury sustained on cross country at the Boekelo CCIO3* last fall in the Netherlands.

“She put a stud right down on the inside of the coronary band and pulled it out, and she strained the leg,” Marilyn said. “The leg looks perfect now and the hoof has grown back, but there was a certain amount of reconstruction that had to take place, and we were worried about infection. She stayed in Europe for awhile because of that to make sure we could do a full course of antibiotics. Luckily, she’s a great healer.”

“Kitty” is back in full work now, but it’s unlikely we will see her out competing until later this year. “Given that the Olympics are out for her and it’s the tail end of the season, she will come out and compete again in the early fall,” Marilyn said. “She’s a young horse at 11, and she has incredibly low mileage in her lifetime, so we have to think about the future.”

Looking to the rest of Marilyn’s string, she slimmed down her eventing crew a bit over the winter, with RF West Indie being sold to Millie Dumas in England. RF Overdressed, a 9-year-old Hanoverian gelding owned by Raylyn Farms, Jacqueline Mars and Robin Parsky, will also be out at Rocking Horse this weekend in the Intermediate.

Better known as “Oreo” in the barn, RF Overdressed spent four weeks jumping at HITS in Ocala over the winter working on his technique and acclimating to the atmosphere of the ring, and Marilyn said it has made a very noticeable difference in the horse.

RF Quarterman, an 8-year-old Oldenburg gelding owned by Raylyn Farms, is also having a more relaxed spring season after completing Boekelo last fall. “He also did some show jumping at HITS for several weeks over the winter,” Marilyn said. “He’s only 8 this year, so he’s having a little bit of time off, but he’ll be back out soon.”

While Marilyn hasn’t been out eventing as much, she’s been keeping plenty busy in the show jumping ring with Raylyn Farms’ Corona 93, racking up big wins in the $35,000 CSI3* and $100,000 Longines FEI World Cup Jumping Qualifier at Live Oak International and a third-place finish in the $216,000 Ariat Grand Prix CSI 4* at the Winter Equestrian Festival last month.

“Because of the staff that I have and the wonderful owners behind these horses, I’ve been able to do both sports and have horses to compete at the highest levels,” Marilyn said. “It’s a blessing and unheard of, and a lot of the credit also has to go to Katie Brown, who runs a stable in both disciplines. I’m incredibly lucky and looking forward to the rest of the year.”