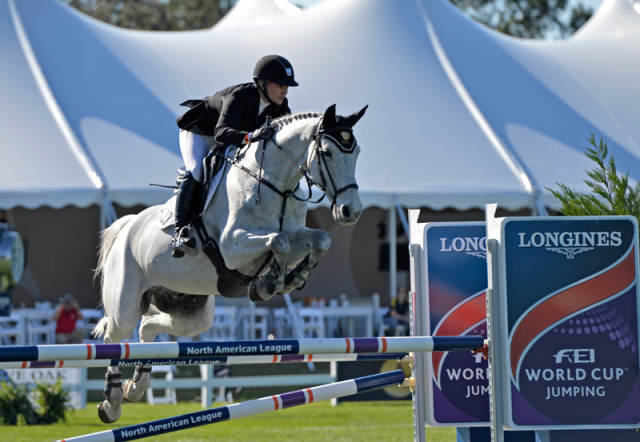 It was a big weekend for Marilyn Little, who has been making her return to the Grand Prix ring with much success this winter. After picking up a win in Wellington earlier this month, Marilyn competed at Live Oak International over the weekend, winning the $35,000 CSI3* on Friday and the $100,000 Longines FEI World Cup Jumping Qualifier yesterday.

Marilyn won the World Cup Qualifier aboard Corona, the same horse she won in Wellington with. Corona is a 12-year-old Hanoverian mare whom Marilyn has owned for a year.

The World Cup Qualifier is used to qualify riders for the FEI World Cup Finals in Sweden next month, and Marilyn was the quickest of seven riders in the jump off with a time of 43.34.

“I think that eventing makes me sharper here,” Marilyn told the press after her big win. “There are things I feel I do better now than I did before I evented. I wouldn’t trade those things for anything and I think that being here in the show jumping ring also allows me to stay sharp for what I hope is coming in eventing.” 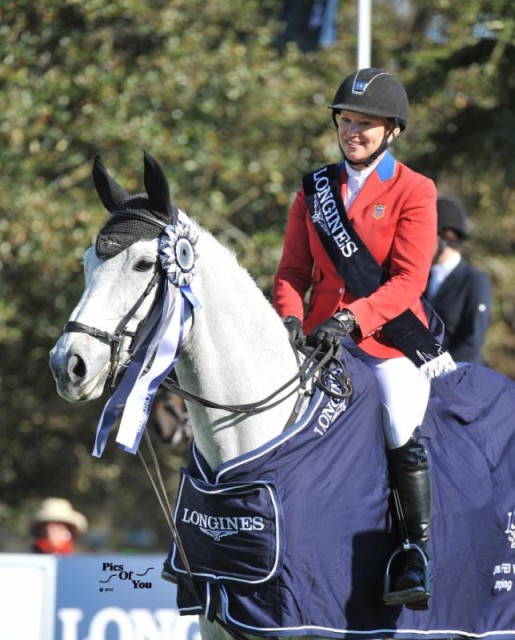 Marilyn Little and Corona celebrate their win. Photo courtesy of Pics of You.

Corona was also the mount tapped to win the $35,000 Live Oak International CSI3* on Friday, finishing the jump off in a time of 35.38. A rail down from the faster Adam Prudent meant that Marilyn gathered the win.

With Live Oak hoping to bring eventing to its calendar, this is a great example of the versatility of a great venue. The facility has proposed a CIC3* on its calendar to run on March 11 and 12, 2017. This would add even more color to the already diversified competition calendar that includes both combined driving and show jumping.

Friends of EN Jennie Brannigan and Hannah Sue Burnett caught up with both Marilyn and Karen O’Connor after the show was over yesterday in an exclusive interview, which you can watch below.

“The last year had a lot of highs, some lows, but that is horses,” Marilyn said. “But also some really great moments, and this is one of them. It’s really a pleasure to be back here show jumping and good horses make it so much fun.”

Additionally, Marilyn also picked up fourth place in Friday’s CSI3* aboard Clearwater, a 9-year-old Holsteiner mare who evented through the one-star level in Europe before joining Marilyn’s string.

Marilyn Little’s return to her show jumping roots continues to make waves! This weekend she claimed victory at Live Oak…