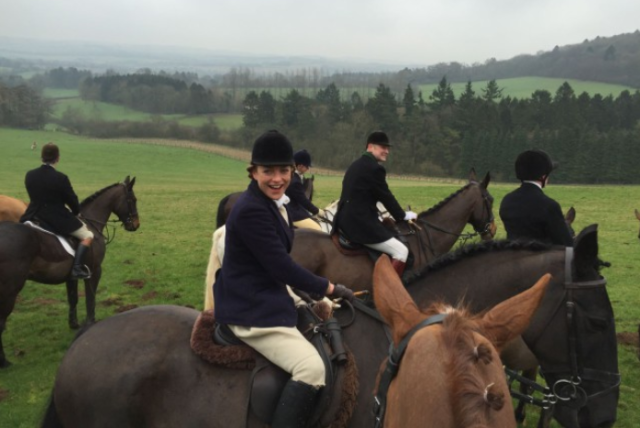 Intrigued by a photo of a British foxhunter with smoldering eyes and apparent ice in her veins, Leslie Wylie reached out to its subject, the Lady Martha Sitwell, in hopes that she could arrange for an interview. One thing led to another, which led to Martha inviting Leslie to come hunting with her in England (see “Part I: How I Got Invited to Foxhunt with British Royalty,” “Part II: Darling, You’re Mad!” and “Part III: I Got Ledburied and I Liked It“).

‘Do you still have skin on the insides of your thighs?’

Firstly, thanks for all your well-wishes regarding my busted-up face and bum elbow. Good news: I had my arm checked out by the physio and nothing is broken — just a bone bruise, it turns out. 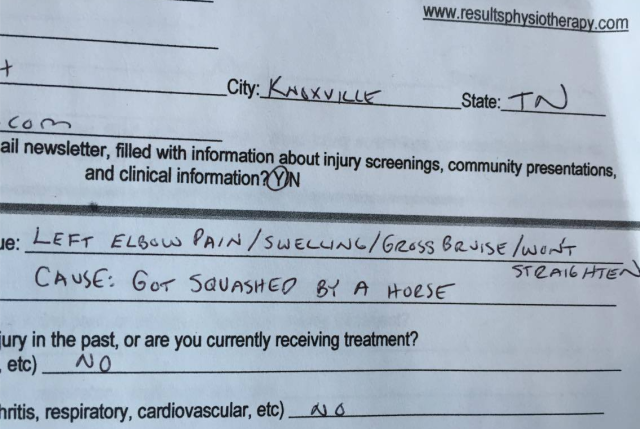 The morning after my “authentic Ledbury experience,” however, I was concerned. Waking up early, I was immediately reminded of two things: (1) I’d fallen asleep on what appeared to be the set of Downton Abbey… 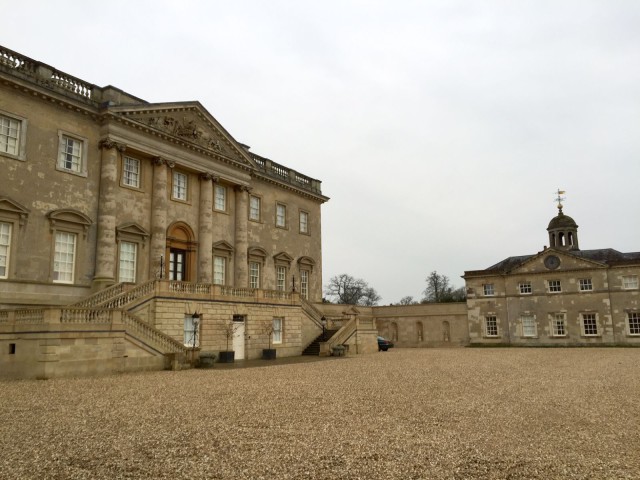 Our digs for the night: Kirtlington Hall, an 18th century manor house in Oxfordshire.

I hobbled downstairs and found our generous host, Lucy Holland, already up and at ’em, bouncing around the kitchen in full riding regalia. The plan was for us to go foxhunting with Lucy and her husband, Simon, today at a joint meet between the Cotswold and Vale of the White Horse Hunts.

I confessed to Lucy that I was having second thoughts. You know, the whole maybe-fractured elbow thing, and also just a general feeling like I’d been hit by a bus.

Lucy looked at me, head tilted in thought. “Do you still have skin on the insides of your thighs?”

I mulled the question over. The insides of my knees were raw from five hours of death-gripping the saddle yesterday, and my inner thighs were bruised for sure, but technically, yes, they still had skin.

Case closed, I was riding. Lucy, AKA Patron Saint of In-Over-Their-Head American Girls Gone Foxhunting in England, also loaned me a clean, dry coat and a pair of breeches that didn’t look like they’d been worn in a mud-wrestling tournament. 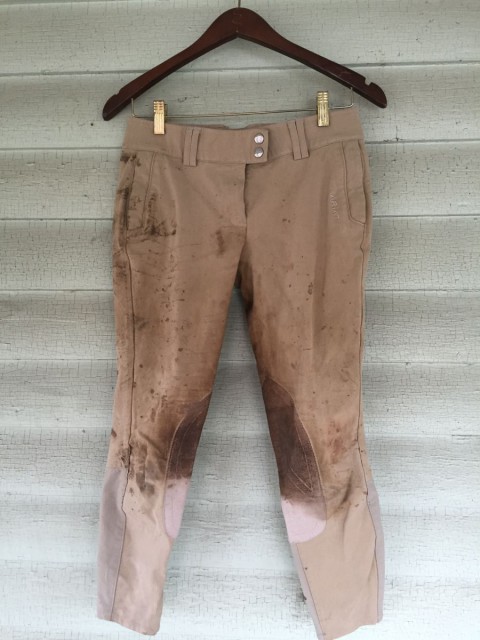 You should’ve seen the other guy.

We reloaded our suitcases and gear into Martha’s hilariously overstuffed MINI Cooper and set off into the gloomy, ice-cold dawn.

Within moments of arriving at the hunt we were all shaking like leaves. Martha’s Portuguese suitor Manuel was taking it especially hard. “He’s all smooth and Latin, susceptible to the cold,” Martha explains.

A glass or two of port made a small dent in our chill as we prepared to mount up. All I could do was laugh when they unloaded my hireling for the day from the lorry and it was, naturally, another gargantuan blaze-faced chestnut. Unlike Bert, however, this one actually had a name: Mr. Fox. 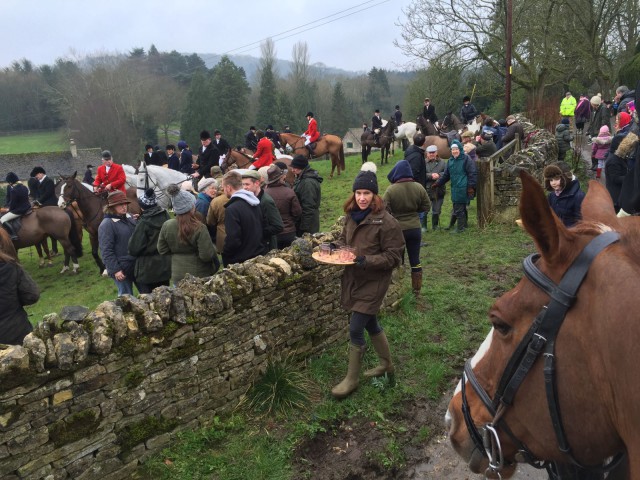 Three-day eventing could learn a thing or two from foxhunting’s pregame hospitality. If there were complimentary glasses of settle-your-nerves port in the dressage warm-up, I’m sure my scores would improve dramatically.

Also unlike Bert, bless his sturdy Irish heart, Mr. Fox had mad hops and a sportscar-grade gas pedal. He cleared the first jump, a solidly prelim-sized hedge, with air to spare and it was off to the races after that.

Whatever pain I’d been experiencing earlier was quickly washed away by a tidal wave of adrenaline as we tackled not-eventing-rulebook-approved obstacles such as one-stride combinations across paved roads and pasture fences topped by electric wire. All of which seemed quite doable compared to yesterday’s monster “bushes” and nemesis “Badminton fence.” If I wasn’t jumping a four-foot solid vertical out of two feet of mud, I was winning.

Martha owns four horses, “only one of which is presently rideable,” whom she is hunting today. Martha appreciates a good quirk and Winston has plenty of them. Perhaps not the bravest horse in the barn, he keeps Martha on her toes and the dulling monotony of perfection and predictability at bay. Idiosyncrasies, both in horses and in people, seem to keep her entertained. 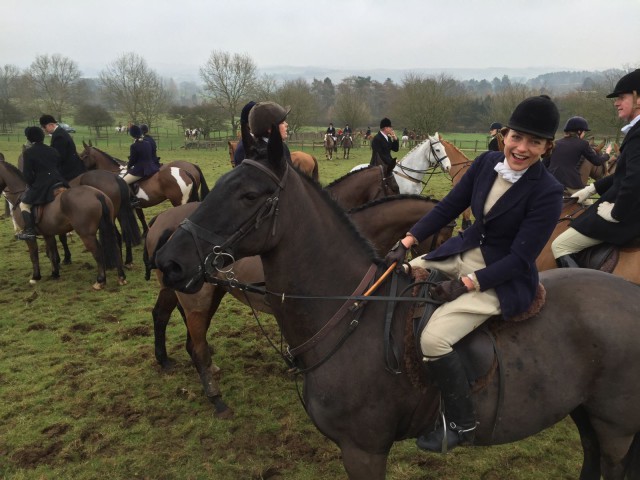 After several hours of galloping and jumping across misty pastures… 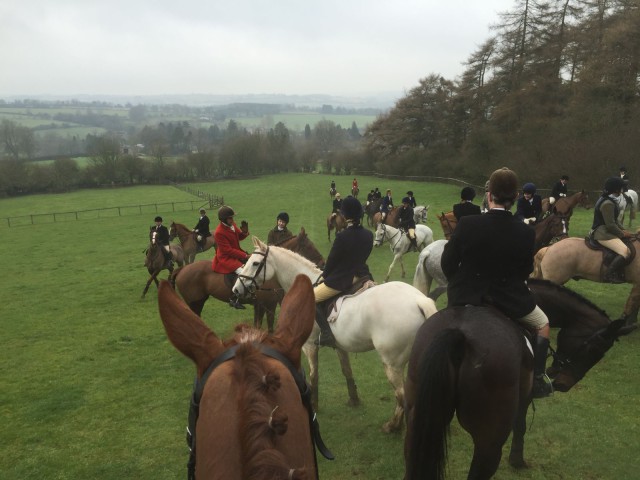 …and darting in and out of the woods… 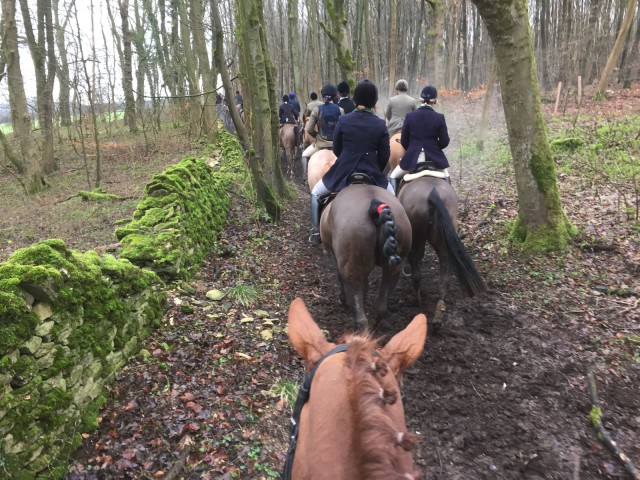 …we packed it in for the day. We piled into the car once more, Manuel and I both nodding off immediately when we hit the road. Martha sang along softly to a mixed tape as we set off toward the weekend’s final destination: the Grafton Hunt Ball.

‘The Key to Happiness’

The closest I came to seeing Martha break character was when we arrived at the bed and breakfast we were staying at in Towcester. She’d chosen a room for herself that had a claw-foot tub beside a fireplace, and all day long as a psychological buffer against the cold, she’d been talking about the steaming hot bath she was going to take that evening.

“I truly believe that the key to happiness is a hot bath,” she had declared, convincingly, on multiple occasions.

Stepping into her room, uninhibited by the presence of the inn keeper who was carrying her suitcases, she spotted the bathtub and literally collapsed with relief and delight. I wish I’d taken a photo of it, Martha splayed across the floor like a soon-to-be-dethawed snow angel, writhing in the throes of her own private bliss.

I’m glad I’d gone on up to my own room when Martha discovered that they were out of hot water.

“I got a bit grumpy, didn’t I darling,” Martha recounted later, looking to Manuel with the big, apologetic eyes of a repentant puppy.

Ultimately, however, no storm cloud stands a chance against Martha’s sunny demeanor. Hot bath or not, she emerged an hour later looking every bit the part of a glamorous classic-Hollywood starlet in a flowing white gown and fur shawl.

With a tuxedo-ed Manuel on her arm and me in tow, looking as dolled-up as one possibly can with half of one’s nose scraped off (thank God for concealer), we headed back out into the night. 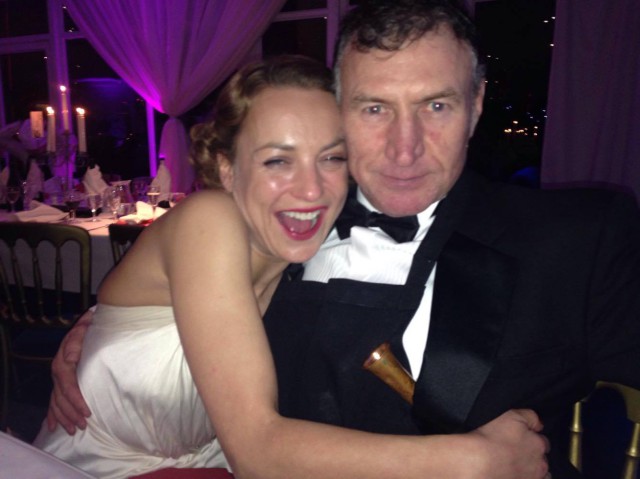 Martha and her “best mate” Mickey, with whom she has solved many a world problem over a late-night bottle of whiskey.

I’m not going to lie. By this point in the weekend, we were all hurting a little.

For the past 48 hours we’d either been hunting, at a party, or on the road en route to another hunt or another party. Sleep-deprived, sore and adrift in that gray area where you’re not yet hungover only because you never really stopped drinking, we drew a blank when trying to recall the last time we’d had consumed a beverage that wasn’t either alcoholic or a Red Bull. Not a good sign.

But the dark night of the soul is when party champions like Martha, Manuel and I shine brightest. It was time to rally.

The ball began with a formal, multi-course sit-down dinner. Naturally, Martha kicked things off by demanding that, one-by-one, all 10 or so of us at the table stand up on our chairs, yell “I am Spartacus” and down our drinks in one pull.

Martha went first, and to the great horror of all the prim, proper guests seated at tables around us, everyone else dutifully followed suit. Moreover, no one seemed to bat an eyelash, which just goes to show you the importance of surrounding yourself with the “right” people — whatever that means to you.

Chugging a nearly full glass of Chardonnay worked wonders to bring me back to life. Dinner was lovely, and the conversation was even better, and then in a fateful twist of events someone — smart money is on Martha’s mischievous friend Tam and/or the Irish instigator Maria — ordered a round of Jägerbombs, which sent the rest of the night into a tailspin of unsolicited rabble-rousing and dancing on tables.

You know, just another night in the life of Martha. 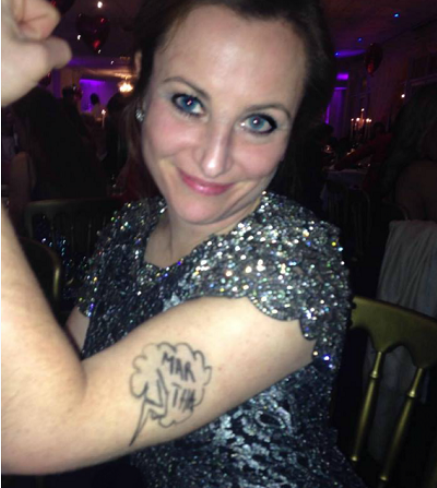 I’ve received a lot of positive feedback on this series, much of it along the lines of “You are completely insane” and “I’m glad you’re not dead.” Both of which I’ll take as a compliment.

But bravery comes in all shapes and sizes, only one of which involves climbing on a strange horse, pointing it at giant obstacles and hanging on for dear life. That’s the easy sort of bravery, available to anyone with enough training and access to a Bert or Mr. Fox. And, of course, there’s a fine line between bravery and, as my husband phrased it when he found out about my hitchhiking escapade in a white van, “just plain bad decision-making.”

The more impressive courage varietal, in my opinion, is the sort you call upon to embark on life’s larger adventures: falling in love, letting friends in, saying yes to the unknown, remembering what you’ve forgotten, reconnecting with what’s important, and giving yourself permission to both fail and succeed — because, if you’re doing it right, both are going to happen.

That’s the sort of bravery Martha Sitwell embodies. She’s isn’t afraid to be who she is, even when who she is seems paradoxical: this woman who’d rather drive a tractor than a Maserati, who weighs as much as a feather but could drink any man under the table, who feels just as at home covered in mud as she does dressed to the nines for a swanky ball, who invites a curious American journalist into her life for a long weekend just because, why not?

Eleanor Roosevelt once said, “Do one thing every day that scares you,” and I’m issuing her advice as a challenge. As audacious as an idea might seem, if you just put yourself out there you never know what might happen next.

As for the adventures of Leslie and Martha, it would appear that they aren’t quite over yet …