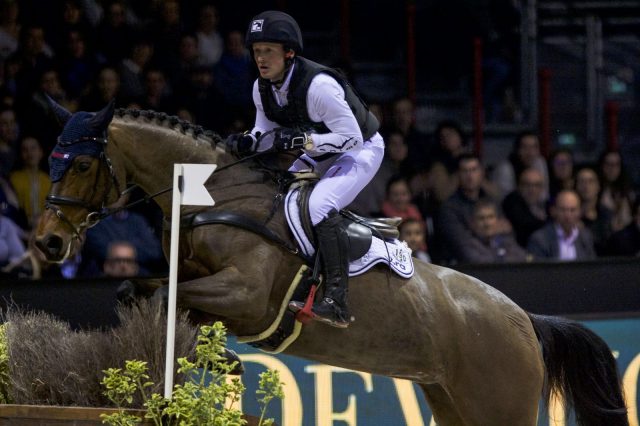 Photo courtesy of the event at Bordeaux.

In traditional fashion, Michael Jung has pulled out yet another impressive victory in our sport, this time in the Devoucoux Indoor Derby in Bordeaux.

He and Maria Stein’s 8-year-old Hanoverian Corazon just edged out frenchman Maxime Livio, their win secured by only 39 hundredths of a second.

The course was well designed and a pleasure to ride. There were many options to do short-cuts, it was very interesting,” Michael said. “The crowd here is amazing. They are cheerful and fair play as they encourage even the foreign riders.”

“It is a very nice class,” he continued. “I appreciated the fact that the horses had the opportunity to explore the course beforehand as we had the chance to ride it in the morning. That way, when they entered the arena in the evening, the fences were already a little familiar. It is an impressive show for them.”

He took a few moments Friday night to celebrate his win, but then it’s back to business for Ze Terminator as he must, “concentrate on the coloured fences again,” with fisherChelsea entered in tonight’s CSI5*. Also in tow this weekend is fisherSolution, who finished 25th in last night’s 1.50m class.

Michael is keeping his show jumping sharp this weekend as he prepares for his show jumping team debut for Germany next month in the Abu Dhabi Nations Cup CSIO5* in the United Arab Emirates.

Maxime finished just shy of the win aboard Boleybawn Prince, a 14-year-old Irish Sport Horse owned by a Mr. Prasert, Mrs. Kanchanaporn and Ms. Arinadtha Chavatanont. Maxime got the ride on this promising gelding by Colin Diamond last year, finishing 14th in the CCI2* at Le Pouget. Watch their trip around the indoor derby here:

For complete results for the indoor derby, click here.
Tonight all eyes will be on the Longines FEI World Cup™, where top riders will be looking to qualify for the final in Paris, April 10-15, 2018. You can watch live on FEI TV beginning at 2:30 EST. The FEI World Cup™ Driving Final will follow at 5:20 EST.
International Jumping de Bordeaux: Website, Startlist & Results, FEI TV
More Insanity on Horse Nation >>