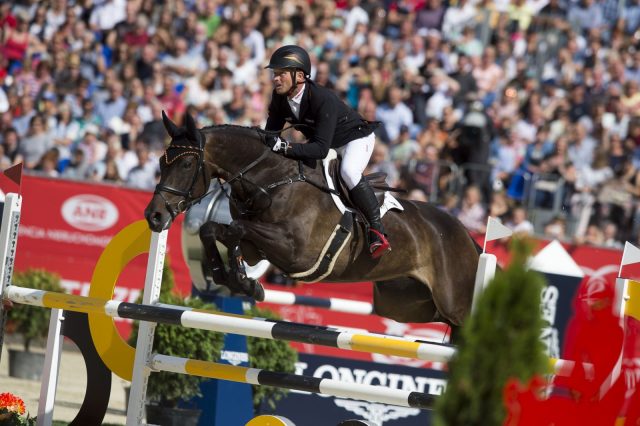 Fresh off the back of (almost) total world domination at last week’s CHIO Aachen, the maestro of eventing has eschewed the idea of a rest day entirely, instead choosing to load up five of his showjumpers ready for a trip to the Royal International Horse Show at England’s historic Hickstead show ground. Even more excitingly, he’ll be making his showjumping team debut as a member of Germany’s Nation Cup team.

This isn’t the first time we’ve seen Ze Terminator tackle the coloured poles — he’s been competing at the CSI5* level for almost eight years, and took his first 5* win in a 1.40m speed class last season at Bordeaux with fischerDaily Impressed (Cartani X Impression). He maintains an enviable string of showjumpers at his base in Bad Soden am Taunus, spearheaded by eleven-year-old fischerChelsea (Check In X Argentia E) and Dante RZ (Diarado x Alabama), both of whom will compete at Hickstead.

Nor is it the first time we’ve seen him earn a showjumping squad call-up: he was selected for the German team for Abu Dhabi’s Nations Cup at the beginning of last year, but didn’t compete. His selection this week is a last-minute call-up to the squad after the withdrawal of Holger Wulschner.

“Michael Jung is an absolute legend in the horse world, and we are honoured that he is making his Nations Cup five-star debut here at the All England Jumping Course,” says Hickstead Director Lizzie Bunn. “There are very few riders in the world who are capable of competing at the highest level in eventing, showjumping and dressage, and we’re sure Michael’s legions of fans will be keen to see him in action as he jumps for the very first time.”

If you’re not at Hickstead, you can keep an eye on the competition — which includes a star-studded Eventer’s Challenge class tomorrow — online. The competition will be live-streamed on Hickstead.tv and ClipMyHorse.tv, while Friday and Sunday’s feature classes, the Longines FEI Nations Cup and the Longines BHS King George V Gold Cup, respectively, will be broadcast on FEI TV. We’ll be on-site to follow his progress and bring you all the news from the Eventer’s Challenge, too, in which Paul Tapner, Alex Bragg, Joseph Murphy and more go head to head in the iconic main arena.