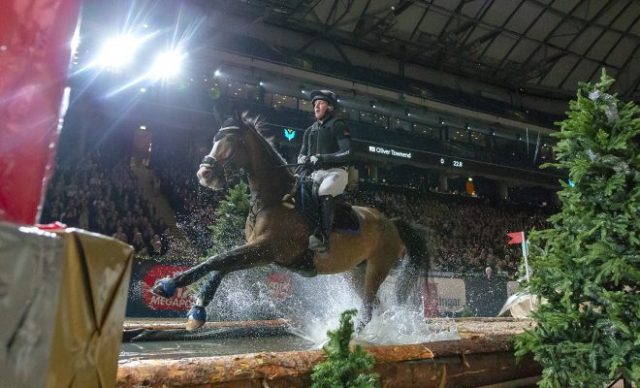 With no Ocala or Aiken to flock to this time of year for our European friends, indoor eventing (which our own Tilly Berendt has dubbed the “fast-paced, Europop-fuelled, boozy and enthusiastic little brother to the sport proper”) takes centerstage during the off-season. We’ve already left one major European indoor competition in the rearview mirror in the Stuttgart German Masters, and this past Thursday at the Sweden International Horse Show top event riders wowed the crowd with how handily and speedily they could ride over an indoor cross country course.

It was FEI world number one-ranked Oliver Townend who emerged victorious after tallying the lowest combined score of two rounds. He rode Emelie Berg and Charlotta Pettersson‘s 10-year-old Swedish Warmblood Happy Hour af Bjornklo to the win after meeting the mare and riding her for the first time earlier that day. Emelie and “Happy” made their CCI2*-S debut together earlier this year. Click through the photos below for a clip of Oliver and Happy’s ride:

German riders took the two spots behind Oliver. Peter Thomsen and rode his own and Annie Thomsen‘s Cool Charly Blue to second place. The 8-year-old German Warmblood gelding made his first CCI3*-L start in September of this year under Peter and was previously campaigned by German teammate Jan Matthias.

Calvin Böckmann earned third place and Crunchip M, a 10-year-old Rheinländer mare owned by Liam and Simone Böckmann, who has not shown in eventing at the FEI level but regularly competes under Calvin at the CSI1* level in show jumping. This pair actually would have stolen the win from Oliver if it weren’t for knocking the rail of the final fence in the jump-off. Here’s their round:

Scroll down to watch a few more rounds that the chinchillas have been able to scrounge around on social media for!