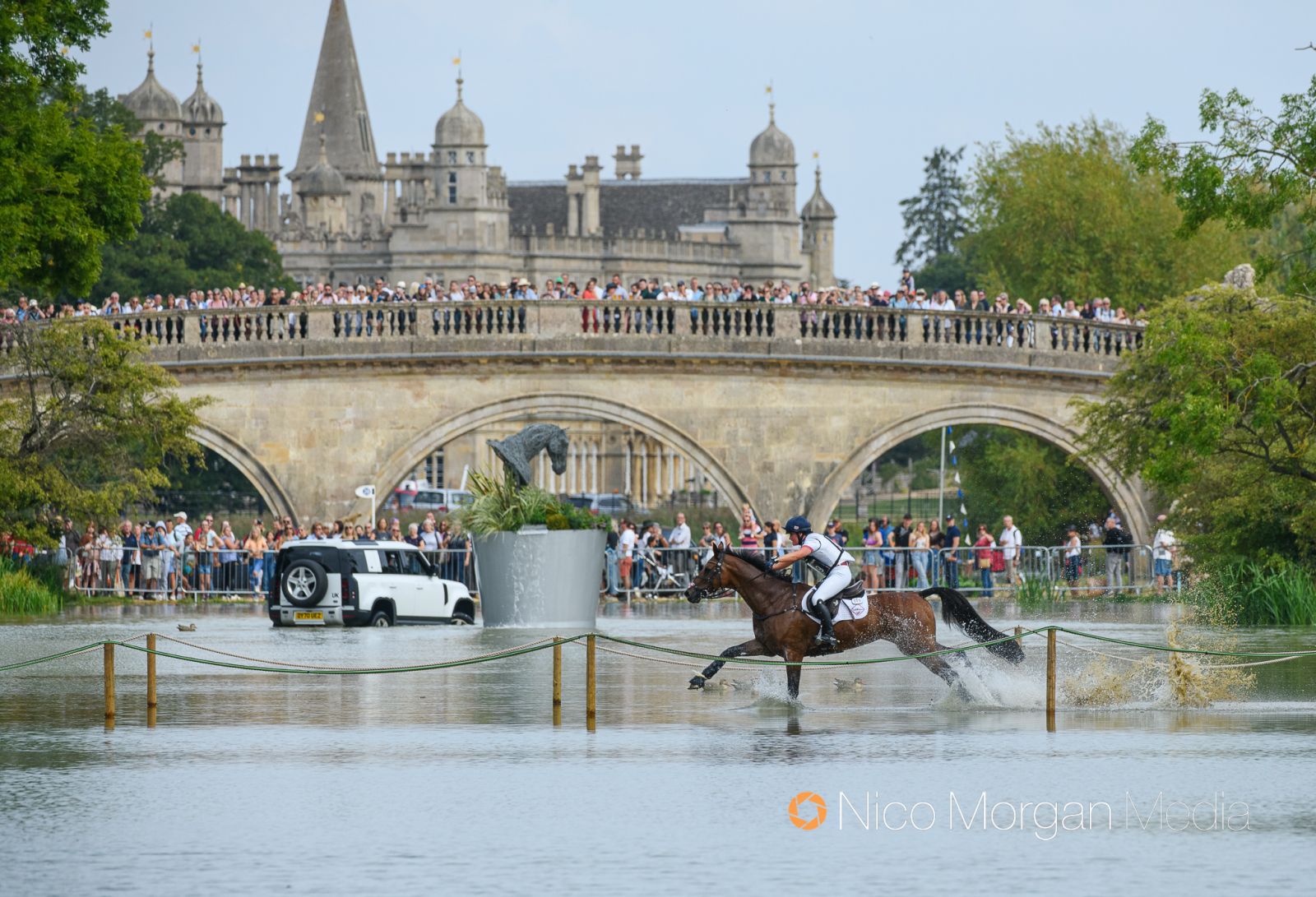 Bubby Upton and Cola chase the clock on the home stretch. Photo by Nico Morgan Media.

It’s tight at the top — overnight leader does not have a pole in hand, and time has already proven to be a factor after the first session of the horses near the bottom of the standings earlier this morning. Paul Connor is today’s designer.

You can view the full order here and keep up with scores here. Show jumping goes very quickly, so these updates will likely be primarily text, but refresh this page periodically for the latest!

10:28 a.m. EST: That’ll do us for a wonderful weekend celebrating the return of Land Rover Burghley. I hope you’ve enjoyed following along with us and I can’t express how thrilled I am for these riders. Many congratulations to all, and Tilly will be along later today with the final report. Until then, Go Eventing!

I’ll leave you with one last missive:

10:23 a.m. EST: What a weekend. Piggy and Vanir Kamira become the 14th pair to win Badminton and Burghley. Tom Jackson winds up in second place in an fairytale result, and our own Cornelia Dorr finishes in the TOP 10 at her very first five-star. Someone put that lady on a team.

Full results can be found here. 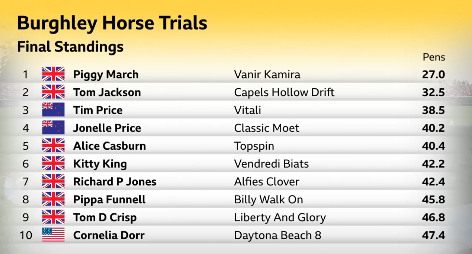 10:19 a.m. EST: Tom Jackson now moves into second place — I’d love to see a live view of his face right now — and Piggy has two rails and some time in hand as Tim lowers into third place. Let’s go Piggy!

10:18 a.m. EST: Tim has the second fence down with Vitali. He’s got a couple in hand to keep his position, and now Piggy has a bit more breathing room. Vitali has the in and out of the treble down.

10:16 a.m. EST: Ah! Rats. Molly has two rails down and will drop into fourth, putting Tom Jackson on the podium in his very first Burghley. “We’ve dreamt of this, but to actually come and do it is another thing,” he tells Rosie Tapner. And just take a look at this finish:

10:15 a.m. EST: And here’s Molly! Jonelle Price and Classic Moet come in, currently in third position and without a pole in hand. Molly wouldn’t be one who will necessarily guarantee a clear round, but she’s certainly got it in her.

10:13 a.m. EST: Wow, what a result for Tom! Tom will be at least fourth, improving on his top-16 finish at Badminton with a clear round. This horse is just 11, and it’s not hard to picture him on the next senior team for the Brits with these seriously consistent and improving results. If not, I know another country that would take this pair!

10:11 a.m. EST: Tom Jackson with the seriously impressive Capels Hollow Drift are now in the ring to defend their fourth position.

10:10 a.m. EST: There’s quite a tricky S-turn about midway through this track, and sadly Pencos Crown Jewel has the middle element down. She’s now added two more rails, which will drop her down a few placings. That’s still no worse than 11th for a debut, not too shabby, but she’ll have wanted to have one or all of those rails back.

10:09 a.m. EST: One rail down will drop Kitty down to seventh on a final score of 42.2, collecting her first Burghley completion — in the top 10, no less. Next in will be defending World Champ Ros Canter with the debutant horse Pencos Crown Jewel. This lady has a knack for producing a competitive result in a horse’s first five-star. Case in point? Her World Championships partner, Lordships Grafflo, who seriously impressed for a top finish in his own debut at Badminton.

10:07 a.m. EST: Love this reaction from Alice! Also a fun fact: Alice’s mother, Caroline, actually competed Topspin’s grand dam and dam — as well as the gelding himself — and eventually went on to breed Topspin and keep him in the family. Such a cool, full circle story!

10:06 a.m. EST: Well unfortunately that’s four rails and a second of time for Bubby, who will drop down out of the top 10. Next to see will be Kitty King and Vendredi Biats, who had an 11-penalty round yesterday to lose their lead but nonetheless impressed with their turn of foot. She’ll aim to finish in the top six or better with a clear round.

10:05 a.m. EST: Bubby does not have a rail in hand to keep her spot, but she does have one to stay in the top 10. Unfortunately she’s had three down as she comes to the treble at 8.

10:04 a.m. EST: Wow! What a class round from Alice, who cements at least eighth place this weekend. What a star. Now on to another promising young superstar, Bubby Upton and Cola III. I’m not sure I could actually pick a favorite from yesterday, but Cola might be close.

10:02 a.m. EST: Alice Casburn, at 20 our youngest rider in the field this weekend, and Topspin are next to see, coming in in eighth position.

10:01 a.m. EST: “I think I’m speechless,” an elated Cornelia Dorr says. “She’s tried so hard and I’m really happy. She jumped out of her skin in there, especially after yesterday. It was hard. I definitely had to think about it in my turns and keep refreshing the canter.”

10:00 a.m. EST: Blast! Pippa has the third fence down, which will move Richard up at least one more spot. She’s also got 7A and 7C, the in and out of the treble down. The oxer at 8 also falls. Rats!

9:59 a.m. EST: Sadly a three-rail round will drop Wills out of the top 10, bumping Richard into the mix of the top placings. Pippa’s now back with Majas Hope, on a 49.0 and with no rails in hand to keep her place.

9:56 a.m. EST: A fantastic clear and the biggest cheer of the day so far for local favorite Richard Jones and Alfies Clover! He will step ahead of Pippa and Billy Walk On and at least maintain his 11th position but is likely to wind up well into the top 10. Another impressive young rider, Wills Oakden, now tgakes the track with Oughterard Cooley. This was another seriously stellar pair to ride yesterday. He’s got the first down unfortunately.

9:53 a.m. EST: Two rails drops Tom down a handful of places with CHF Cooliser. Richard Jones and Alfies Clover, in 11th place after cross country, will be the next to see. This is going fast — our winner will be crowned soon!

9:51 a.m. EST: Three rails and two seconds of time for Tim, who was still working to get rideability from Bango today. Next in will be Tom McEwen with the absolute boss mare CHF Cooliser.

9:48 a.m. EST: It’s truly a weekend for the mares as Tom also collects a clear round with Liberty and Glory. What an impressive little horse.

9:46 a.m. EST: That’s a 47.4 finishing score for Cornelia, who’s basically guaranteed to keep moving up with the way these rounds are going. We’ll see where she ends up! Next in will be Tom Crisp and the lovely mare, Liberty and Glory.

9:45 a.m. EST: Gosh, Daytona Beach is such a jumper. That’s a DOUBLE CLEAR round for Cornelia!!! I am ECSTATIC!

9:40 a.m. EST: Two time and two rails for Cedric, who will hold his position for now. Clear rounds are going to be valuable today!

9:36 a.m. EST: Catching up on the two American riders who jumped in this morning’s session: Meghan O’Donoghue and Palm Crescent had two rails and added 1.2 time, and Emily Hamel had one pole down with Corvett along with 1.6 time. Meanwhile, inside the time but four rails down for Padraig and HHS Noble Call.

9:35 a.m. EST: Just those three down and some time as Sarah completes her first Burghley! You’ll recall she came over all the way from Australia to tackle this event. What a feat! Next in will be Irish Olympian Padraig McCarthy and the absolutely “noble” HHS Noble Call.

9:33 a.m. EST: And that’s the first clear of the day for Pippa! Next in will be Australian rider Sarah Clark with LV Balou Jeanz. This pair was held this morning but later accepted on re-presentation. They sadly have the first three down to start their round.

9:31 a.m. EST: And we are underway! Pippa Funnell and Billy Walk On will be the first to see.