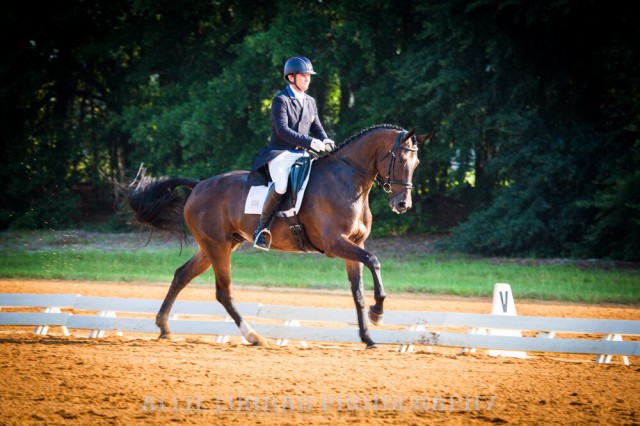 We’re seeing lots of competitive dressage scores today after dressage completed for the Advanced and CIC3* divisions at the weekend’s headlining events. We have two Advanced and one CIC3* event running this weekend: Advanced at Five Points and Aspen Farms and CIC3* at Copper Meadows. Plus there’s another Big B going on this weekend in addition to Burghley — Breda in The Netherlands!

Phillip Dutton and Mighty Nice will take the lead in the Advanced at Five Points on a score of 27.1 in the Irish gelding’s first competition back since Rolex. That puts them just ahead of Kim Severson and Cooley Cross Border, who are our predicted pick for the win this weekend.

Kim and Cooley Cross Border earned a 28.4 nod from the judges ahead of Sharon White and Clifford M, who scored a 29.1 but was withdrawn from the Advanced division later in the afternoon along with his stablemate Cooley On Show. Sharon has been battling a herniated disc in her back, and we’re sending her positive healing thoughts.

That withdrawal moves Michael Pollard and Halimey into third place overnight on a score of 29.6 in his first Advanced start since March — he most recently placed second in the CIC2* at Richland Park. Michael also had a rocking day in the Open Intermediate, where he scored a 19.2 with Boris O’Hara, a 9-year-old KWPN gelding owned by Kathleen McDermott. I think we need to start keeping a record of Michael’s sub-20 dressage scores — how low can he go?

Boyd Martin and Blackfoot Mystery, one of his newer rides that he recently acquired from Kelly Prather, sit in fourth with a score of 30.0. This is Boyd and Blackfoot Mystery’s second start together, the first at Advanced, so it will be exciting to see how their partnership has progressed early on. Boyd also rounds out the top five with Steady Eddie on a score of 30.4. 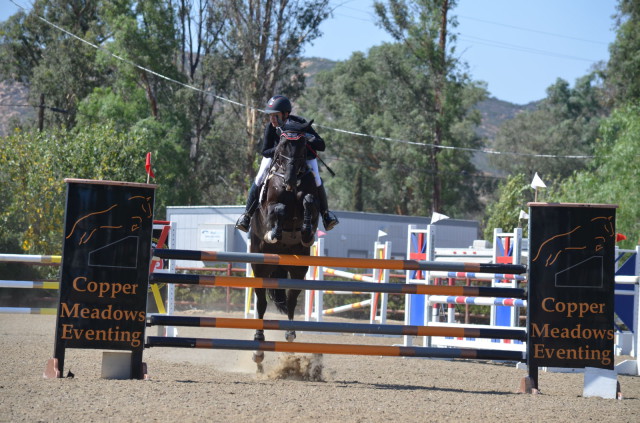 Over on the West Coast, it’s all Tamie Smith in the Professional’s Choice CIC3* at Copper Meadows. Tamie and the Ahearn family’s Mai Baum, who we’ve predicted to win this division, scored a 41.3 in dressage and then jumped a clear show jumping round to lead after the first two phases.

“Lexus” is prepping for the Dutta Corp Fair Hill International CCI3* this fall (for which they just received a USEF Land Rover Competition Grant) so Tamie will be looking to keep the 9-year-old German gelding on the right track as he aims for his first CCI3*.

Frankie Thieriot Stutes and Ride On Video have once again partnered up to bring us videos from Copper Meadows. Click here to watch dressage and show jumping highlights and then click here to watch a preview of Hugh Lochore’s CIC3* track. (Isn’t Frankie an adorable eight-month prego?) 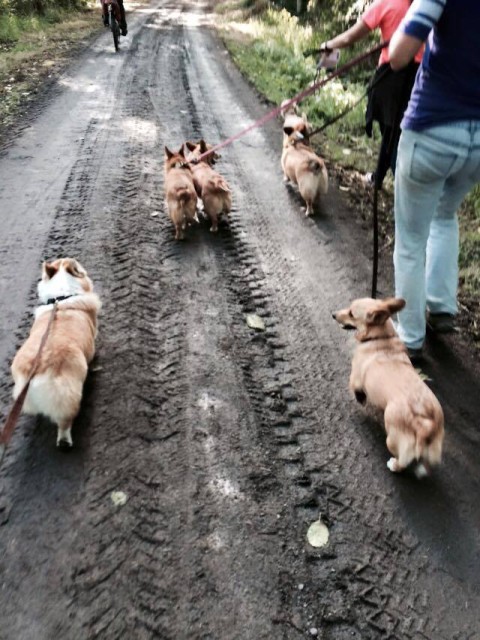 How many Corgis does it take to walk a cross country course at Aspen Farms? Thanks to Aspen for sharing this fun photo by Ashley Shaw Colonel!

A smaller division of four is contesting the Tin Men Supply Advanced at Aspen Farms in Yelm, Washington. You can take a look at Chesna Klimek’s fence-by-fence cross country course preview that we posted earlier here.

Mary Burke and Prince William are your Advanced leaders, scoring a 35.2 for the overnight lead. This is Mary and Prince William’s first full Advanced together — they finished second in the Advanced/Intermediate at Whidbey Island in July.

“For our first Advanced he was very rideable and relaxed which made for a smooth and accurate test,” Mary said after the test. “I was pleased the areas that I have been working with him in dressage have improved. I am looking forward to doing the Advanced cross-country course tomorrow. I am also very excited to be participating in my first Gold Cup Series event and want to thank all the sponsors that make it possible.” 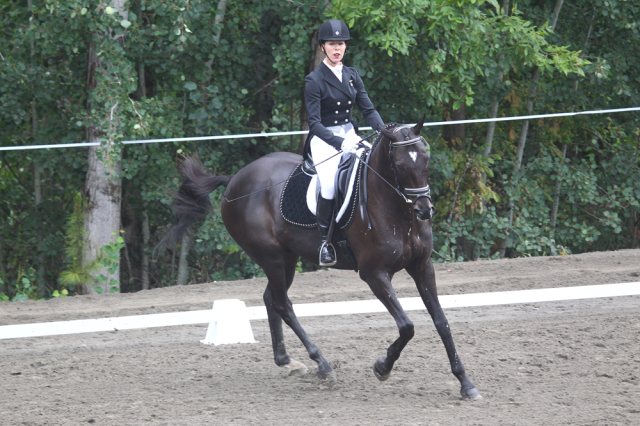 There’s another very familiar name out at Aspen this weekend in Gin & Juice, who is returning to competition for the first time since competing at the 2014 World Equestrian Games with former rider Hawley Bennett. Sara Mittleider has now taken over the ride on the 15-year-old Thoroughbred mare; Sara and “Ginny” scored 18.9 to lead the Open Preliminary division overnight. 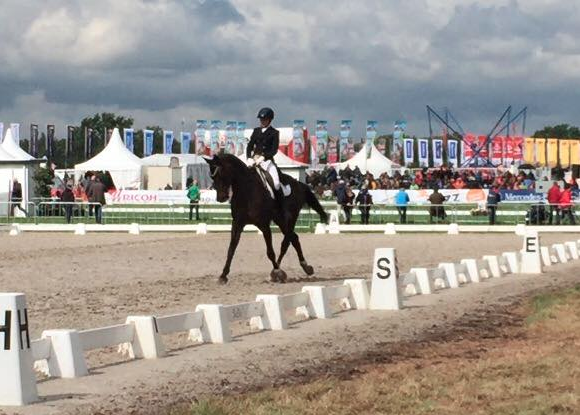 Liz Halliday-Sharp and Fernhill By Night at Breda. Photo courtesy of Liz.

Liz Halliday-Sharp has both her top mounts Fernhill By Night and HHS Cooley out in the CIC3* at Breda in the Netherlands this weekend, and she’s positioned very well after dressage. Fernhill By Night is in second place in the 47-horse field on a personal best score of 36.1, sitting behind Pia Münker and Louis M, while HHS Cooley is in sixth on 44.7.

Cooley is returning to competition following a minor injury at The Fork in April, so it’s great to see him back out and about. Liz said on her Facebook page that she was very pleased with both horses, who held it together despite the fact that the FEI World Driving Championships for Ponies were being held right next to the dressage ring! 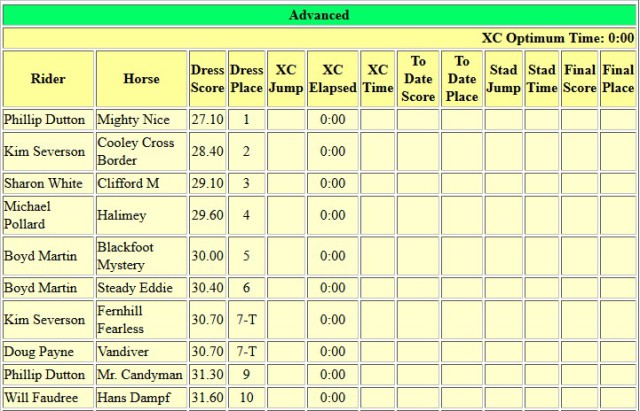 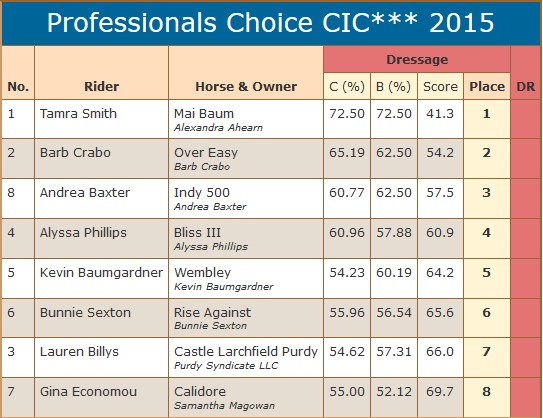 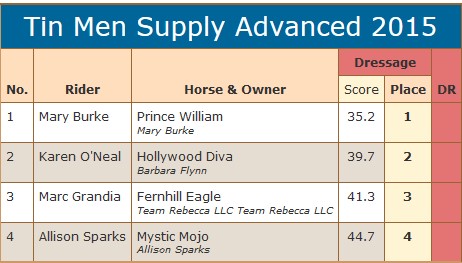