Maddie Blackman recently made the decision to retire her longtime partner, Gordonstown. Maddie and Gordy have been a consistent pair at the three and four star level for many years now, always quietly performing their best and jumping around some of the toughest tracks in the world. While retiring a partner like Gordy is never easy, Maddie wanted to write this for us as a tribute to a great horse who shaped her career like no other. Thanks to Maddie for writing, and thanks for reading! 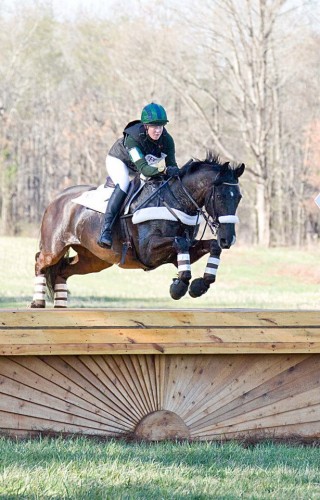 Gordy and Maddie at The Fork HT. Photo by Mike McNally.

It all started when I was fifteen. Buck Davidson had a sales horse in his barn, what looked like an overweight black pony. At 16.1 hands with a big roman head and pointy ears, Gordy is an Irish Sport Horse by Cruise On out of a mare named Drumnacross. When I went out to try horses at Buck’s farm, the girls who worked for him said, “Please buy the black pony, we can’t stand him! He’s so naughty!” Gordy was notorious for destroying fences to access better grass, pulling blankets off the wall and dismantling his automatic waterer every day.
I got on Gordy and he was not immediately my type of ride. He had this massive trot, flicked his toes and was a complete power house but didn’t touch the bit at all! Buck had me jumping the tops of the standards, and I felt like I was being thrown all over the place. I tried him once more, but still wasn’t convinced, so Buck told me to keep coming out, and take him on trot sets and everything, and I did. I took him swimming in the river, cross-country schooling and everything. Sometimes I became upset because I still felt like I had no business riding a horse this nice, and I was worried I would ruin him. However, I really fell in love with him despite my qualms, and I finally made the decision to buy him.
Gordy and I started at the Preliminary level and went on to eventually compete at Rolex three times and even overseas at Blenheim CCI3*. His biggest lesson to me was patience, and lots of it. He’s always had a very big personality, and everything has to be his idea. If he refuses to do something, you can’t go for punishment, but instead you have to pat him and tell him he is perfect until he agrees and complies. He is as quirky as they come and the epitome of an Irish pony. Leslie Law called him an adrenaline junkie once, and he was so right! Gordy also taught me that no dressage test is worth getting upset over, because the best way to deal with it is keep a big smile on your face.
All these years with Gordy have really made me believe in myself as a rider, and learn how to fight for what I want. The first time we went to Kentucky, I was eighteen, and it was our first four star. We were at the first rider meeting, and Mary King was sitting next to me. I was a little star struck! I went back to the barns and looked at my mom, and asked her, “What am I even doing here?! My horse can barely do a twenty meter circle on the bit, I’m out of my league!” My mom told me to believe in this horse because he would do anything for me, he would literally lay down his life for me. 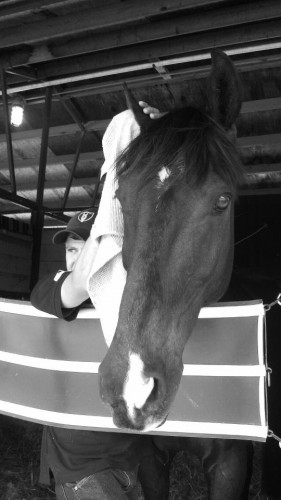 Over all the years, Gordy and I had a great time at the top levels. We won our first two star, completed many three stars including Blenheim, where he ran clear cross-country with just some time. The first year he took me to Rolex, I was only eighteen and I won the award for the top Young Rider, the J.D. Reeves trophy, making me the only person besides Buck Davidson to receive the award at that age. Even though I may not have won every event, and we had our fair share of bad dressage tests and run outs on cross-country, but ultimately Gordy opened so many doors for me, and gave me so many wonderful opportunities that it was all worth it.
Sadly, this winter I made the hard decision to retire Gordy. His last lesson to me was knowing when to say goodbye. It’s hard to tell him that he’s retired, that his job is done, because he keeps looking at me from the barn wondering when we are going to start training for 2014! He owes me nothing, and I owe him everything, so Gordy will retire sound and happy at my parent’s farm in New Jersey, where he will run the farm with his best friend Dunkin the miniature donkey. I have chosen to give him the winter off completely, and perhaps in the spring I can find a brave young rider to let him compete at the lower levels.
Lastly, I wanted to thank all my sponsors and supporters, because without their help Gordy and I couldn’t have achieved all that we have. The whole Blackman family, Clem and Annette Carfaro, and my vet Dr. Mark Donaldson. My amazing sponsors Amerigo, JoJo Sox, Nupa Feed, Tipperary, Charles Ancona, Dubarry and Bardsley. Thank you all for helping Gordy and I fulfill our full potential!