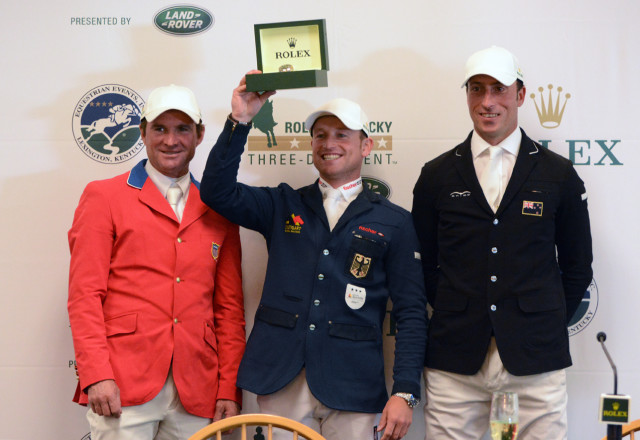 You’re heading into the Rolex arena with a fighting chance at winning the most coveted wrist candy in eventing, and there’s just a fraction of a point separating first and second. What’s going through your mind?

For Michael Jung, who cantered in just 0.4 point behind leader Tim Price, he was aware of the stakes but not anxious about them.

“I think you always have pressure from yourself when you go to a competition,” he explained at the final press conference. His first of two rides was on fischerRocana, who was in third place heading into show jumping. He said he felt “more relaxed” after their double-clear round but maintained his focus heading into the ring on then second-placed La Biosthetique Sam.

There was a gasp from the crowd when the WEG Gold winning pair pulled one, then two rails. Michael says that fischerRocana requires a bit more of a going ride and that he felt he went “a little too fast in the combination.”

The top three had pulled far enough away from the pack over the course of the weekend (there was a 10.2 point gap after cross-country between third and fourth) that Sam’s eight faults only dropped them one place.

After Michael left the ring, the pressure was on leader Tim Price and Wesko for a clean round.

“You kind of put that to the side and focus on your preparation,” Tim said of his mental state heading into the ring. As for his horse, “Really I just tried to harness it as an advantage… I just believed that it was going to lift him and help him around today.”

Their round was marred by one rail, which Tim attributed to “a slightly bad line” — but he says that he’ll definitely be back next year to finish the job he started!

What’s next for Michael? The long-range plan is Rio, but with two world-beater horses now in his barn, it’s anyone’s guess as to who he’ll ride.

Are fischerRocana and Sam now equal in Michael’s estimation? Michael confessed that even as the mare continues gaining ground on her star stablemate, Sam is still his “favorite.” It’s the horse that first established his stature as a world champion, but his affection for the horse extends well beyond their accomplishments on the international stage.

“He is a special personality and a very good friend of me,” he said. “I think no horse is better than him.”

Congratulation to all of Rolex 2015’s competitors and we wish them all a safe return home.