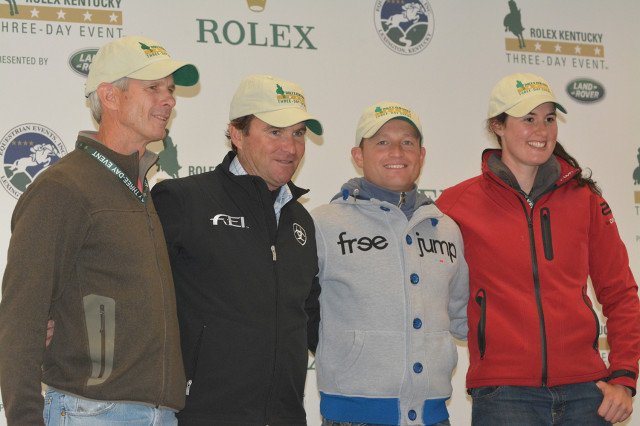 After tenaciously holding onto his lead heading into tomorrow, Michael was quick to give credit to fischerRocana FST, who if anything looked better than she did last year in the muck.

Phillip Dutton also finds himself in second and third place aboard Fernhill Fugitive and Mighty Nice, respectively. And Maya Black has landed in fourth place at just her second Rolex, and she admitted she didn’t even know there was a media center here at the Park!

The gathered leaders gave us some great quotes from their rides today, and we were even joined by course designer Derek di Grazia toward the end. If you missed our live stream you can view the press conference video in its entirety below.

Michael Jung on how the weather affected his ride: “For me it was a bit hard working today, but I’m absolutely happy about my mare, fischerRocana, she was absolutely fighting and really concentrated and trusted me. That gives you, as a rider, a very, very good feeling. She (was) galloping in the end and when I push her a little bit, she (was) galloping as fast as she can. She tried all the best. That’s absolutely great feeling.

Michael Jung on the timing of Kentucky: The four-star in Kentucky is always very early in the season. You have not so much time to bring the horse to the best condition. Maybe we need one or two more three-stars that you have a very good feeling before it comes very early.

Phillip Dutton on Fernhill Fugitive’s run today: I thought all three went well, but like Michael said it wasn’t easy. The conditions, especially as the day went on … but it’s always safe. I think Derek does a great job with the course because the problems were spread throughout. I think this was a great learning experience for them.

Maya Black on if she’d thought she’d be in this press conference today: “Not particularly, but I’m very happy to be here!”

Lauren Kieffer Land Rover Ride of the Day on Landmark’s Monte Carlo: “THe horse, it was his first four-star. He’s a homebred and we’ve had him his whole life. He’s owned by (Ms.) Jacqueline Mars and he hasn’t always been the easiest but she believed in him from the beginning and he really was foot perfect today. I’m really happy with him.”

Michael Jung comparing his cross country ride to last year’s: This year, I feel that the mare was really a lot fighting, really good galloping … my idea was that I give the mare a bit more time in the beginning, but she (was) galloping very fast and very good up the hills.”

Lauren Kieffer on how the conditions varied between her two rides: “I think the ground was a lot better this better. It started to deteriorate — on Veronica I did have to hunt for good ground. The nice thing about Kentucky is it really took it quite well, it wasn’t bottomless or anything. I certainly think that’s why you saw the time get harder and harder to get.”

Maya Black on her trip today: “I wasn’t really concerned about any of the fences, per se, I was more concerned about just getting around safely with my horse and making sure I did the best thing for him. Last year, he got a little bit more tired. This year, I was really pleased with how he galloped and how he recovered. He definitely felt better. I was more just wanting to be smart and ride him the best I could towards the end of the course.”

Michael Jung on whether or not he would sleep well tonight knowing he has three rails in hand: “I sleep very well because of today.”

Michael Jung on what he looks for in a potential four-star horse: *silence and raised eyebrows*

Derek di Grazia on the weather forecast for today: “I think you’re always a little nervous about it. Last year, we rain in the rain and the footing held up pretty well last year, so I knew the ground here is quite good. We hadn’t had that much rain throughout the week, so I knew that starting out we’d probably be ok. It was just a matter of what was going to happen during the day. I take my hats off to the riders, I think they did an excellent job and they really produced some great rounds.”

Stay tuned for much more from the penultimate day of Rolex, and many thanks as always for sharing this weekend with us!