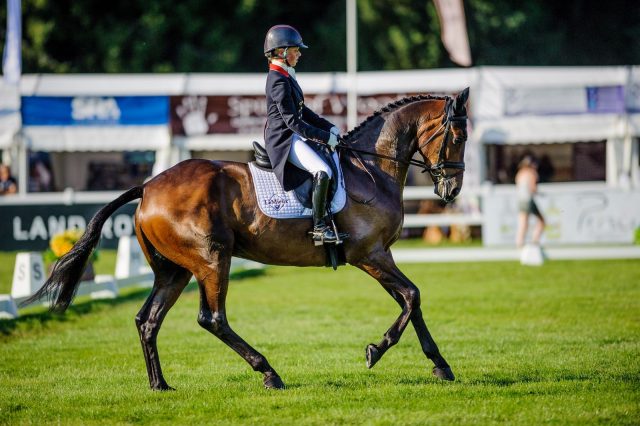 Ros Canter and Lordships Graffalo maintain an early lead to sit in top spot as the jumping phases dawn. Photo by Tilly Berendt.

There’s been a distinctive buzz of excitement rippling through the grounds of Blair Castle today as the hotly anticipated British team was announced for next month’s European Championships — and rather fittingly, the top spot in the first phase of the CCI4*-S has been snatched up by one of the exciting young horses who features on the list.

Nine-year-old Lordships Graffalo is listed as Ros Canter‘s direct reserve for Avenches, but although he’s second in command to World Champion Allstar B in that respect, he’s certainly not been languishing in his stablemate’s shadow over the last year: he finished second in the eight- and nine-year-old CCI4*-S temporarily hosted by Burnham Market last autumn, and won the inaugural CCI4*-S at Aston-le-Walls on his dressage score. Even more excitingly? Ros reckons he’s still on the up and up.

“He always gets marked very well, but I was in the lorry watching my test back from Aston, where he was joint first on a 21.8. The strength over the last few months has got better again ,” says Ros, who posted a 25.2 with the gelding today. “It’s exciting, because he enjoys the job and doesn’t need drilling beforehand. He’s got a good temperament for it and hopefully, I think there’s a lot more to come. It’s all going in the right direction.”

Though ‘Walter’, who’s owned by Michele Saul and was briefly campaigned by Tom McEwen during Ros’s pregnancy, is a consummate professional under saddle, he’s not quite as straightforward of a character on the ground.

“He has a very weird personality,” laughs Ros. “He’s a funny character; his tolerance of things sometimes isn’t great. Earlier in the year at Burnham Market, he decided he didn’t like a stable he couldn’t see out of, and he was a nightmare. He threw his toys out of the pram completely: he tried to dig out, he tried to rear out, and he tried to run out — pretty successfully! — the whole week. But what’s amazing about him is that he can be horrific in the stable, but the second you get on him he performs like he hasn’t been upset. He’s quite high-maintenance on the ground and has been known to gallop off around the lorry park because he buggers off with his grooms fairly regularly; he’s a character, but to work with, he thrives. I think it’s his brain — it’s a little busy, so he needs to be given something to work with.” 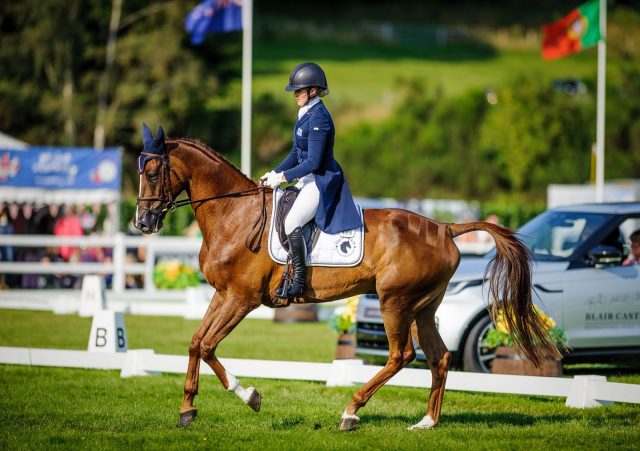 Another hot favourite for the Paris Olympics is Yasmin Ingham‘s Banzai du Loir, who won last year’s eight- and nine-year-old CCI4*-S ahead of Lordships Graffalo, but finds himself just behind on a 27.6 today.

“Banzai was very, very good — I actually thought it was his best test he’s done to date,” says Yasmin, who has made her name in the sport by winning each of Britain’s national age titles from under-16 through under-25 and taking double European gold at the Pony level. Now 24, she’s making a serious mark on the Senior rankings with her string of horses, including the flashy French Banzai. He’s logged some exceptional results since joining Yas’s string in late 2019, including a win in Aston’s under-25 Advanced, third place in his CCI4*-L debut in the under-25 class at Bicton, and fifth at Burgham last month. But today was the first time that the pair have faced an arena with this much action: much of their partnership has unfolded during the pandemic, and so the sensitive, clever Selle Français had plenty to try to cope with when faced with the multiple rings, vibrant crowds and numerous marquees of Scotland’s premier event.

“This is probably the most atmospheric arena that he’s ever been in; I completely underestimated how big this event was. and when I saw the main arena I thought, ‘oh my god, he’s going to go in there and prance about with his tail in the air like an idiot!’,” says Yas. “But he had plenty of work earlier, and then he went in and did his best test he’s done — both the changes were clean and his shoulder-ins and half-passes were lovely. Something we’ve been working really hard on is just getting both the changes in the right place at the right time, because sometimes he does them a little bit involuntary or he does them in the wrong place — like up the centre line, where we’re not supposed to be doing changes! He’s just very keen and eager to please. I really like that about him — his attitude is amazing — but sometimes his brain just works a bit too quickly for whatever’s going on!”

Hyper-focused Yas is quick to celebrate her young horse’s wins in the ring, but just as diligent about spotting the areas she wants to work on for the future, which include the walk work and the subsequent transition to canter — a segment of the test that has been the undoing of many horses’ marks.

“He just gets a bit bored in the walk; he’s a bit of a busybody and I think he’s almost just waiting for that canter transition, so he just gets a bit fidgety. I just need to work on relaxing him a bit more in the walk,” she explains. Now, with a super mark on the board and in an enviable position on the leaderboard, she’s looking forward to making the most of Blair’s spoils.

“It’s our first trip up here, and the sun is shining, which makes such a difference. I don’t think there’s anything more stunning than the castle and the grounds. The ground feels great underfoot and the course looks good — it’s big and bold, so it’ll take some forward riding. Hopefully I’m not going to get carted off with down a hill, but we’ll think about that tomorrow!” 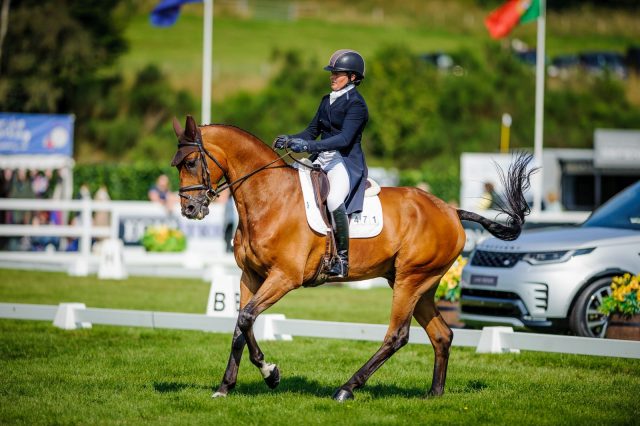 Though much of the upper echelons of this leaderboard showcases up-and-coming young horses, third place is held overnight by the established partnership of Selina Milnes and Iron IV, who produced a 28.2 to slot into the tightly packed top-five. William Rucker’s Belgian-bred gelding first stepped into the spotlight back in 2018, when he finished fourth in the CCI4*-L at Blenheim, and since then, he’s been on the fringes of a major result: he’s finished tenth at Barbury, fourth at Burgham, and an achingly close second at Houghton this season. He’s easily the most experienced horse in the top five of this section, and will be perfectly primed to put the pressure on the young guns tomorrow. 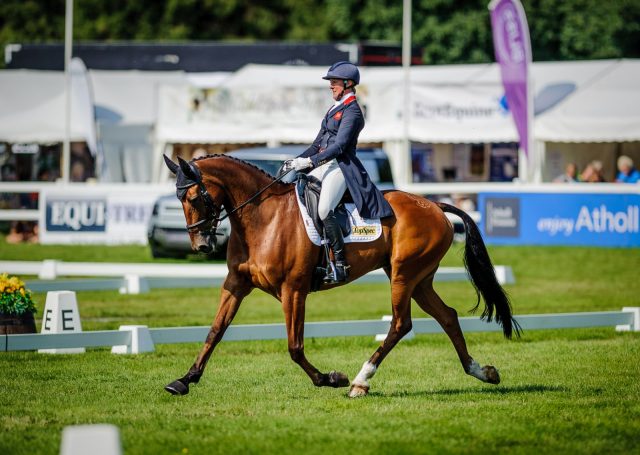 CCI4*-L leader Nicola Wilson strutted her way straight into another leaderboard, this time with the former Andrew Nicholson ride Coolparks Sarco. Owned by James and Jo Lambert, the nine-year-old Irish Sport Horse joined Nicola’s string just this year, but the partnership is already looking impressively well-established; they finished eleventh in the horse’s first four-star at Burgham last month, and though they couldn’t match the 24.8 they scored there today, their 28.3 puts them well in the hunt in what is shaping up to be a serious battleground for the country’s young up-and-comers. 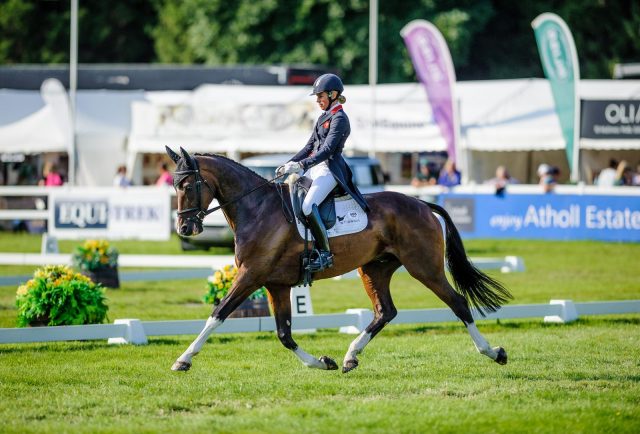 Izzy Taylor and Monkeying Around move into the top five despite some unplanned extra moves. Photo by Tilly Berendt.

It’s a testament to the quality of 10-year-old Monkeying Around‘s flatwork that despite a choice bit of lunacy in the first flying change, which earned him a 1 from the judge at C and gave us all an up-close-and-personal look at the soles of his feet, he and Izzy Taylor still finish the day in fifth place out of 42 competitors. Their 28.9 is something of a departure from the low-20s scores we’ve seen the dressage-bred Hanoverian produce (in fact, the last time he scored above a 26 was two years ago), but still keeps them within a rail of the lead — and Monkeying Around has only had one pole down in an international over the last two years. Could this be another podium finish for the gelding, who hasn’t finished lower than third in any international in 2020 or 2021? It’s not unlikely — but with today’s announcement that he’ll be heading to Avenches for his British team debut next month, it must all feel little more than a formality at this point. 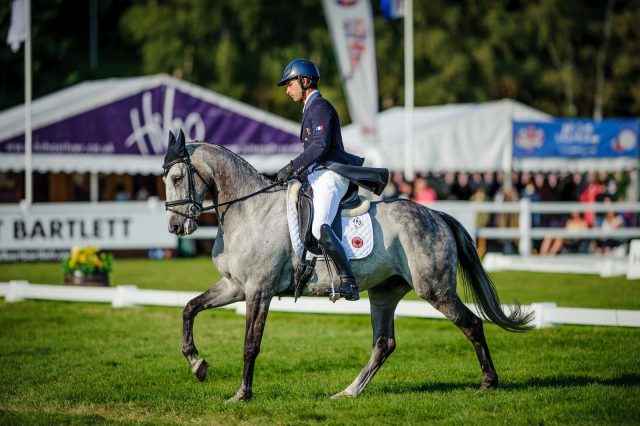 The pandemic has put paid to international competitors crossing the Channel for a long time, and so it feels doubly special to welcome the reigning champion of this class back. French Olympian Astier Nicolas rode the extravagant Babylon de Gamma, who won the CCI4*-S here in 2019 as just an eight-year-old debutant, to a 30.9 and overnight 11th — “I was pleased with my horse, but not so much so with the mark,” he says with a particularly Gallic shrug — and also makes an appearance in the top ten, sitting eighth overnight with the former Seven-Year-Old World Champion Alertamalib’Or on a 29.6. Now eleven, the gelding is actually lower in mileage than his younger stablemate; after winning Le Lion d’Angers in 2017, he made his four-star debut in 2018 with great success and plenty of promise for the future, but was then sidelined until the end of last year with a tendon injury. Time is a great healer, and Astier gave him plenty of that — and now, after two successful three-star runs, including a win at Avenches CCI3*-L back in June, he makes his long-awaited four-star debut this week. Astier’s goals for the horses are different: “I’m not going to run [Alertamalib’Or] fast,” he says, explaining that this is just a milestone in the horse’s education, while Babylon de Gamma is using the run as preparation for something even bigger.

“I won’t be on the team [at the European Championships] for personal reasons, and so I plan to take him to his first five-star,” he says. “We will go to Maryland or to Pau — but really, my first choice is Maryland. I don’t know how hard it will be to get there, because I’ve never ridden over there at Kentucky or anything, but that’s our hope for him.”

The CCI4*-S competitors will have a busy day on their hands tomorrow: they head into showjumping from 8:30 a.m., and then on to cross-country from 4:50 p.m. (and, presumably, straight into the bar after that). The CCI4*-L entrants, for their part, will focus their attentions on Blair’s mountainous cross-country course from 12:30 p.m. We’ll be bringing you a closer look at all the questions ahead of them soon — but for now, you can preview both tracks (plus all the other national and international ones!) via the CrossCountry App.

The top ten in the CCI4*-S at the conclusion of dressage.