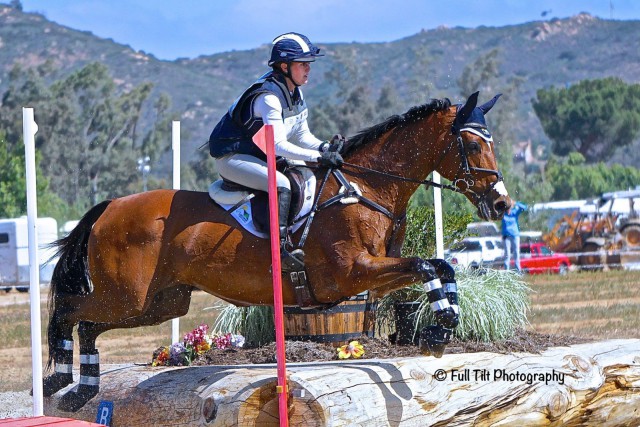 We received the terrible news last night that 2014 USEA Groom of the Year Sarah Braun’s 15-year-old Thoroughbred mare, Perfect Intentions, has been euthanized following a freak traumatic injury sustained at home in Temecula, California, where Sarah is head groom and barn manager for Hawley Bennett.

“Candy” was kicked in her left front leg while in turnout last week, and two separate sets of radiographs showed no signs of injury. The mare was placed on stall rest as a precaution, but she sustained a spiral fracture in her left front radius (forearm) bone yesterday while in her stall. Vets are unsure exactly how the catastrophic injury might have occurred.

It’s a heartbreaking end to Sarah and Candy’s comeback story. They had just completed and won their first Advanced together at Copper Meadows in June, the culmination of years of setbacks and hard work. After winning team gold at the North American Junior and Young Rider Championships in 2012, Candy suffered a broken hip, underwent emergency colic surgery and battled severe pneumonia, all of which thwarted the pair’s plans to move up to the top level.

Sarah was elated with her mare after finally completing their first Advanced together this summer — thankful for the opportunity to have been given a second chance with her horse of a lifetime. Read on for the touching tribute to Candy that Sarah posted on her Facebook page last night:

“Candy, you are my best friend. You gave me the wings to believe in that dreams do come true. Winning a gold medal at Young Riders and winning our first Advanced together, but that’s only a small part of our incredible partnership,” Sarah wrote.

“You’ve taken me to places I’ve never dreamt possible. You were such a stoic and tough mare, and I believe that is what got you through some really tough times. I wouldn’t be the rider or person I am today without you with everything you have taught me. You have been a horse of a lifetime.”

Sarah also thanked everyone who has been a part of their incredible journey together. We are so deeply sorry for Sarah’s loss. Horses are fragile creatures, and our time with them is precious but fleeting. Rest in peace, Candy.