EN’s contest from our sponsor OCD and Doc’s Products Inc. invited readers to share their rehabilitation stories with us. The winner of the contest will receive an awesome prize pack from OCD. Entries are now closed, but we had some wonderful submissions that we’re happy to share with you. 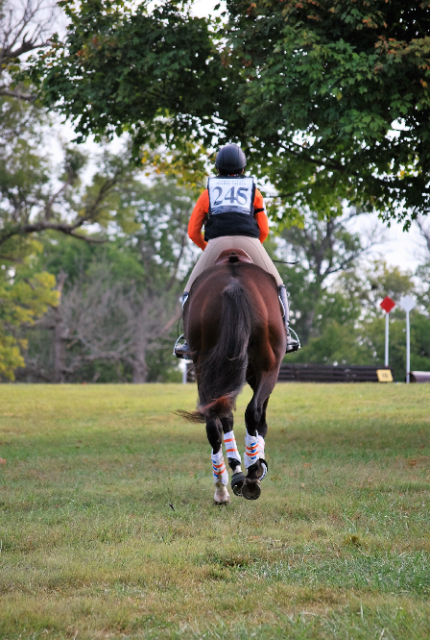 Secluded Way was born on Welcome Here Farm in February of 2008 and was given the barn name “Truffle.”. She lived a normal, healthy life on the farm until she decided to sideswipe a tree and fractured her right hip as a yearling. Once she was fully rehabbed, she raced, later steeplechased and was finally put into eventing training with L&N Equestrian in 2014. Truffle’s sweet disposition and strong work ethic made her a favorite in the barn, and she quickly progressed.

I met Truffle on a freezing day in Aiken, South Carolina in March of 2015. The little bay mare standing quietly in the aisle might have looked plain to some, but there was something about her that seemed to tell me that there was more to her than meets the eye. I watched as the talented Nilson Moreira da Silva piloted her around the arena, and when it was time for me to get on, I was both terrified and excited. Our first ride was anything but smooth, but I immediately knew that this mare had a lot to give. She was talented and forgiving, and a week later she was mine.

Truffle stayed in Aiken for the month of April to tackle her first Training level event. I waited nervously in Michigan to hear the results, but the call I received was definitely not the one I was hoping for. Truffle never made it to the event because she had coliced and was in a clinic in Aiken where she stayed for four days. Truffle returned to the farm much skinnier than she had left it, but we hoped that she would put weight back on quickly.

At this point I was anxious to get her home, but I knew that she needed some time to return to her normal routine before I shipped her the 14 hours north. A few weeks later, she was en route to Michigan, and I held on to the hope that we had gotten all of our bad luck over with in the beginning of our partnership. Boy, was I wrong.

Truffle and I quickly bonded over our mutual dislike for loud noises, love of dogs and a popsicle after many of our rides. The mare had spunk to match my own and we seemed to click almost instantly, especially on cross country. After attending clinics and our local Pony Club rally I was looking forward to the season ahead, but unfortunately it’s never that easy in this sport. 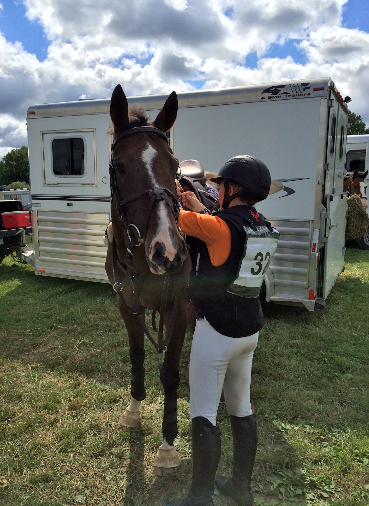 Grace and Truffle getting ready for cross country after Truffle’s recovery from Potomac Horse Fever. Photo courtesy of Grace Mitchinson.

On the fourth of July, I walked out to the barn to feed my horses and found an incredibly droopy Truffle standing disinterested in the corner of her paddock. Although I knew she was tired from the clinic we had just gotten back from, there was something unsettling about her half-closed eyes,the sweat on her body and a build up of swelling in her left front. I went to take her temperature and had the vet on the phone before the thermometer beeped.

Truffle was diagnosed with Potomac Horse Fever as well as a strained tendon in her left front. She was immediately put on stall rest and, much to my dismay, was given a hefty dose of DMSO. The next morning Truffle seemed a little more upbeat, and the routine I would follow for weeks to come began. The day started at seven when I would mix her breakfast, feed her some hay, and try to clean her stall before she picked up the muck tub and flung it at the wall. She was allowed to go for one 20 minute hand walk followed by ten minutes of grazing.

Next, I removed the poultice from her injured leg and she received a dose of Banamine. Immediately following, the poor girl had her legs soaking in ice water to treat both the tendon injury and prevent the possibility of laminitis. I repeated the process, reapplied her wraps, and the day ended at two in the morning with her last dose of Banamine.

Although I didn’t get to show much that year, Truffle’s rehab went smoothly and she returned to work after a month. She was able to go to two Beginner Novice derbies and one recognized event before the season ended, and she was a star each time. Things were finally starting to look good, and I had high hopes for the winter. The fall brought with it no stirrup work, dressage boot camp, and a nasty buck during every transition.

Truffle seemed to be off in her hind end, but multiple lameness exams, massages, chiropractic work and saddle fitting couldn’t bring her relief. In December she was finally diagnosed with EPM. As her attitude changed, I was greeted with a full set of teeth every time I tried to touch her, and my sweet little mare seemed to disappear. Truffle hit an all time low of biting, kicking, rearing, bucking, squealing and leaping straight up all during our 30 second walk to her stall each night. 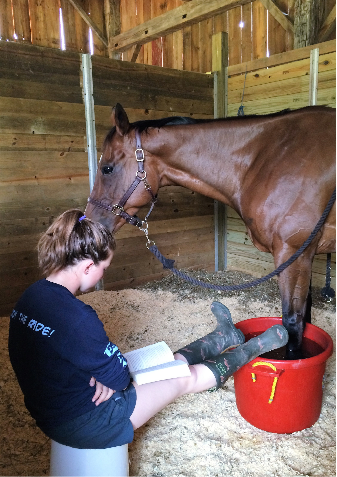 To say I was disheartened would be a massive understatement, but still I dutifully braved her acrobatics to administer her medication, change her blankets, and run a brush across her body. The winter was bleak, but by the start of spring she was beginning to resemble the horse I had met in Aiken.

With the help of our wonderful dressage trainer Ruth Hill-Schorsch, Truffle and I have slowly walked through EPM rehab for the last six months. I’ve reintroduced her to working in an arena with other horses, trotting in a straight line, and standing for grooming. Truffle took the opportunity to show everyone her true jumping ability during the lunging portion of her rehab by leaping over every shadow on the ground like they were Prelim tables. Her coordination improved, and finally it was time for me to sit on her.

Getting on Truffle for the first time in four months was one of the most intimidating things I have ever faced. I worried that she wouldn’t feel the same, that she would immediately turn into a fire breathing dragon, that she’d buck me off and go running around, injuring herself further. Instead, I got on and she turned to look at my leg hanging tentatively at her side, gave a content sigh, and proceeded to go plodding around the arena with me beaming like I had just won Rolex.

Truffle and I will have a very slow season this year, but I’m hoping to have her schooling cross country by September. We plan on attending our region’s Pony Club dressage rally and a few other dressage schooling shows along the way with the hope that she will stay sound and healthy. I’ve learned to appreciate every moment spent with this very special horse, and I hope we can return to what we love: tearing up the cross country course. 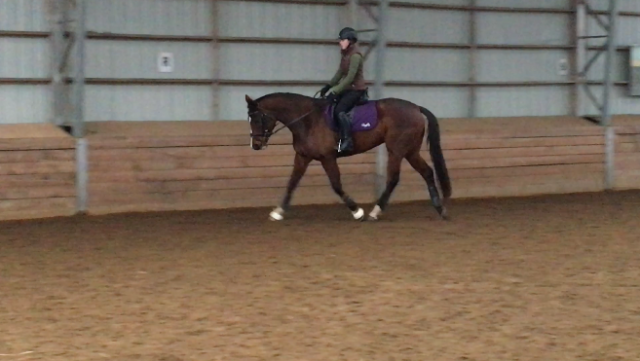 Truffle has faced a lifetime of difficulties. Fractured bones, life-threatening illnesses and strained tendons have yet to slow my girl down, even though our time together has been a whirlwind of ice boots, vet bills, and shoving a tube full of paste down her throat.

This horse has taught me countless lessons in the time that I’ve had her, but the clearest and most important one must be that one has to have heart to be successful. Truffle has the most heart of any horse that I have ever worked with. She always gives 110% whether we’re schooling simple leg yields, running cross country, or going for a trail ride by ourselves.

This mare has overcome every single difficulty that has affected her, and I’m confident that she will always have that urge to fight through. Henry Ford once said “When everything seems to be going against you, remember that the airplane takes off against the wind, not with it.” Truffle and I have finally taken off, and I cannot wait to see where we land.