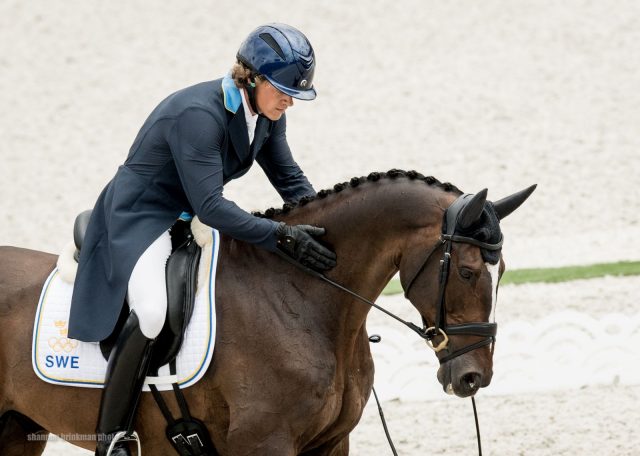 The new Olympic format of three to a team has felt like the hottest topic of the last couple of years – mostly because in all that time, and with all that discussion, most of us still haven’t quite managed to figure out how on earth the substitution rule works. We saw the format trialled in Boekelo in 2019, though only in part, because there the subs were allowed to contest the entire event as individuals. Realistically, it’s been a rule change that will need to be seen in action to be understood. And now, just half an hour prior to the start of cross-country, we’ll see the first-ever Olympic eventing substitution.

Ludwig Svennerstal, who sat 40th after dressage on a score of 35, has withdrawn Balham Mist from the rest of the competition due to a minor injury sustained since performing his test yesterday. This means that the travelling reserve, Sara Algotsson Ostholt and Chicuelo will step into his role. They didn’t do a dressage test, as they were still on the bench at that stage, so they will adopt Ludwig’s score of 35, and will add on a 20-penalty substitution ‘fee’, bringing their score to 55. That puts Sweden on a team mark of 111.1, which moves them from fifth place to thirteenth.

Now, Sweden doesn’t have a reserve pair on the bench, which means that all three combinations – Sara and Chicuelo, Louise Romeike and Cato 60, and Therese Viklund and Viscera – will need to complete this phase to remain competitive.

THE NEW FORMAT: A REFRESHER

The first thing you need to know is that the teams will be smaller – we’re used to seeing teams of four, with the three best scores counting, and one rider’s score dropped. In the new format, we won’t have drop scores at all anymore – instead, each team will have three riders, and each score will count.

Comprenez-vous? Great. But, we hear you asking, what happens if someone falls on cross-country, or doesn’t make it through a horse inspection, or comes up against one of the myriad other pitfalls that can crop up through an event? Without a drop score, do they just have to accept 1000 penalties for a non-completion and move on?

Nope. This is where the system really starts to look different, because for the first time ever, we’re now using a substitution system, which allows a reserve horse and rider to step in at any point in the competition.

That means that four horses and riders will travel to Tokyo for each nation, but one – the reserve or substitute pair – will not be accredited and won’t be able to compete unless they’re drafted in. What they do have to do, however, is pass both horse inspections. The team of three will be named ahead of time, and the reserve can be subbed in up to two hours before the start of dressage with no penalty to the team. The horse that was taken out can then wait in the wings as the new team reserve. After that? Get your calculators out, because it’s time to do some counting.

If all three combinations on the team complete each phase, nothing changes – they’ll each have their final score as usual, and those three scores will be combined to create the aggregate, or team, score. But if a rider fails to complete a phase, they’ll incur penalties for the non-completion. That works like this:

Once the elimination or retirement has occurred, there’s a couple of options. First, the horse and rider can be substituted, which means that those penalties they notched up as described above are kept on the team score card, while an extra 20 penalties is added on as penance for making the substitution. Then, whatever penalties the substitute earns are also added onto the score card.

Or, they can forego the substitute method, and the horse and rider that were eliminated or retired can continue on to the next phase with those non-completion penalties on their record. This isn’t always allowed, mind you – if the non-completion occurred because of lameness or injury to the horse, any sort of abusive or dangerous riding, a disqualification, or a horse fall, they are ineligible to continue. Likewise, substitution isn’t allowed in cases where abusive or dangerous riding or a disqualification has led to the non-completion of a phase.

Another important point to note is that only one substitution can be made per team, and that substitution must go to a new horse and rider – that is, a team rider can’t simply have a reserve horse waiting in the wings as a substitute. Any substitution made between the phases – let’s call these overnight substitutions – will still incur the 20 penalties for substitution, but won’t incur non-completion penalties. For example, if a team horse and rider complete cross-country, but the horse doesn’t look right the next morning, they can be replaced by the subs for just 20 penalties. They won’t add 200 penalties, because they completed the cross-country, and then won’t add 100 penalties, because they never started showjumping.

If a substitution can’t be made for any reason – because the sub has already been drafted in, or because of a disqualification, or simply the lack of a sub option – it can get expensive, and fast. If a rider is eliminated on cross-country for dangerous riding, for example, they’ll incur the 200 penalty ‘bonus,’ plus 100 penalties for failing to showjump, because they can’t be replaced.

(Oh, and another thing? Only horse-and-rider combinations who complete the entire competition are eligible for individual medals. Which is, you know, fair.)

In any case, any scores earned throughout the competition are kept on as part of the final team score, because drop scores no longer exist. So if a team member completes the dressage with, say, a score of 30, but then takes a spill across the country, they’ll have 230 points on their scorecard. If they then opt to sub in the reserve to showjump, they’ll add the substitution penalty – 20 points, so a total tally of 250 so far – and then the substitute’s showjumping score. Let’s say the sub knocks a rail – the final score is 254 for that slot on the team. If two riders fail to complete the cross-country, they’ll each add the 200, but because only one substitution can be made, they’ll need to decide whether one of them will still showjump the next day. If they can’t for any reason, they’ll add another 100 penalties.

If all this sounds incredibly confusing, we hear you – it’s a huge departure from what we know, and it all sounds pretty bonkers. These changes have been brought in to mitigate the confusion that surrounded drop scores – though we’re used to them, many new viewers of the sport found them difficult to understand, and so this system, it’s hoped, will prove clearer. It’s easy to make a snap judgment on what we’re seeing, but this week’s competition will offer some clarity – watching the system in action will, at the very least, help to demonstrate how it works, which is always easier than reading and re-reading the rule book until you go cross-eyed.