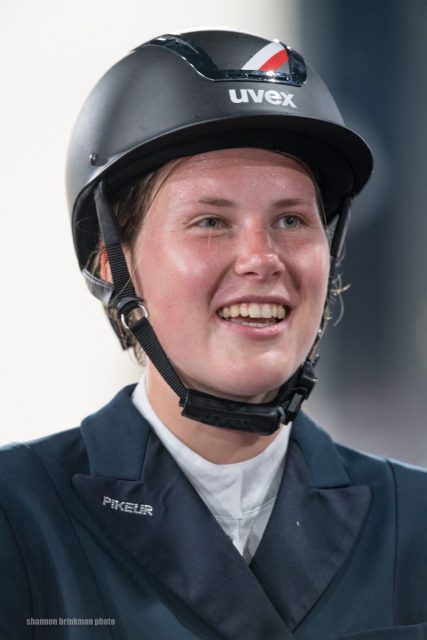 Every Olympic story is an extraordinary story – and one that we really love comes from 23-year-old Polish rider Malgorzata Cybulska, who sits in the top twenty after dressage with her horse Chenaro 2. A true one-horse rider, she balances her competitive ambitions with being a full-time student – and she’s had to overcome medical challenges along the way, too.

At the beginning of 2019, Malgorzata – who goes by Gosia – was sidelined after a major spinal surgery to reverse the effects of a degenerate disc condition that she’d been managing since she was a child.

“I had this problem when I was twelve because I’m quite tall, and I had grown more than twelve centimeters in one year,” she explains. “The shape of my spine is also not really good for riding, for sure. But you know, when you’re twelve, it’s like – oh, it hurts, okay it stops, and like, that’s it. So it’s not that it came from nothing, [just that] I was just neglecting it for quite a long time. But always, people are clever after the fact, right? So this is me.”

By the time she was 21, though, the problem had worsened enough that she needed to make a decision.

“The thing was that I was for sure not able to ride, but actually I was also not really able to walk, and there was possibility that I wouldn’t be able to feel my legs if we won’t do anything,” she says. “So I had two options: operation or rehabilitation. But with rehabilitation, the problem was that if something happened, like if I fall down from the horse, it suddenly could just cut off [the feeling in] my legs and that would be it. And rehabilitation for like a few months, it would maybe stop the pain and so on, but it wouldn’t solve the problem. And [I kept] thinking that I was just 21 years old,  you know, and it would be in my head that whatever I do. If I fall on the ice or something, it would be ‘oh my gosh, my back, oh my gosh’. So, having in mind that the Olympics were coming and this was our priority, and also for my health, and because I just love horses and riding, we decided to do the operation.”

The surgery was a success – but Gosia had to spend a long four months out of the saddle. With the European Championships at Luhmühlen looming that summer, her boyfriend Alexander Kadlubowski kept the horses – including Chenaro – in work.

“After I started riding again I had like, three months before the European Championships, so I got three competitions [before them]. So it was really hard time; a really stressful time. But we managed. And actually, what’s funny is that before operation, jumping was my weakest point, but when I saw my boyfriend riding my horse and jumping so well I just thought, ‘gosh, this is possible – this is not that there’s something wrong with this horse or something; he can do it, I cannot do it. So I actually can ask my trainer, after this break.’ [As a result,] I started to ride the jumping much, much much better than before, even without riding. This is the good point of this operation.”

That August, Gosia contested the Europeans, which was her first-ever Senior championship. She did so riding Chenaro 2, a horse she’d had since he was five and she was fifteen, and with whom she’d competed for Poland as a Junior and Young Rider. They proved the strength of their long partnership that week, impressing across all three phases to finish just outside the top 30. But despite their obvious connection, and their list of accolades and national titles, it wasn’t always plain sailing for the pair.

“Chenaro is the sweetest horse ever,” she says, but “when I got him he was like, five and a half years, and I have to say that I hated him. I hated him so much! He was like, ‘party!‘ all the time. I was not able to work with him; my dressage tests were like, 45%, because [he’d go down the] centerline like, ‘woohoo, party time!’ and just freestyle. So at first I really hated him, and I was afraid of him. But now, we’re already working like, seven years together. And, yeah, now everybody say that he’s an angel, and he’s so calm, and so on!”

Their major strength as a partnership is on the cross-country course, where Gosia says the 12-year-old Oldenburg is a generous, genuine ride.

“What is the most important about him is that I really trust that he will help me with, for example, cross-country – this is a huge thing, because this is my only horse. I’m not training five horses a day, so I don’t have too much [mileage]. And competing at this level, I have to have in my head that if I do make a mistake, he will help me out – so he has a huge heart for this competition and yeah, we are a great couple. He just loves running, and the great thing is that he is really focused on me and the fences, and we have quite good harmony that he reacts on my aids quite quickly, so that I have control, I know what is going on, and he helps me when I did a mistake. This is like most important for me.”

Unusually, Gosia is a one-horse rider, though she does occasionally share the ride on Sagenhaft 5, a relatively inexperienced three-star horse, with Aleksander. At the moment, one horse is enough, though – she balances her time in training with a five-year degree in Psychology at the University of Warsaw. With two years left to go, she’s honing her focus in on Sports Psychology – and she’s found the constraints of the pandemic a surprising help in managing her juggling act.

“Now everything is online so there’s no problem with driving there and back and whatever,” she says. “Especially when you have to prepare for this kind of competition, and now we are already a month away from home,  this is really helpful that it’s online. But actually, I would really like to come back to school because for me, it’s totally exhausting just to sit in front of this screen. I just like to see people face to face and and actually, how can you study  human relationships when you have just a picture on the screen?” 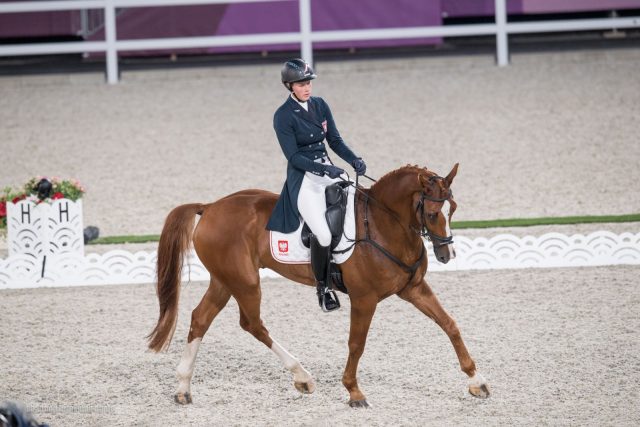 Malgorzata Cybulska and Chenaro 2 lead the way for Poland after dressage. Photo by Shannon Brinkman.

“I’m really happy with it,” she says of her test, which scored incredibly consistently through each movement. “Many people that know me, they know that I’m most of the time not really happy with my tests, because I expect so much from myself and my horse. And this one – I have to say that it was really great.The horse was really concentrated on me, and I could request from him everything I wanted. And that’s why I could do the precise test, and he was responding, he was relaxed, and he was great. I’m really really really happy about it!”

“It’s a huge honor [to be here], especially [considering] that, you know, I’m not the most experienced. I’m the youngest and so on, so on. Three years ago, when my trainer [Piotr Kulikowski] told me that this is the plan we were like, ‘what the heck? Like, what?! I should go, you know, to the European Championship of Young Riders, not the Seniors, right?’ If he didn’t see this potential in us, then we wouldn’t be here – so it’s been a huge, huge plan.””