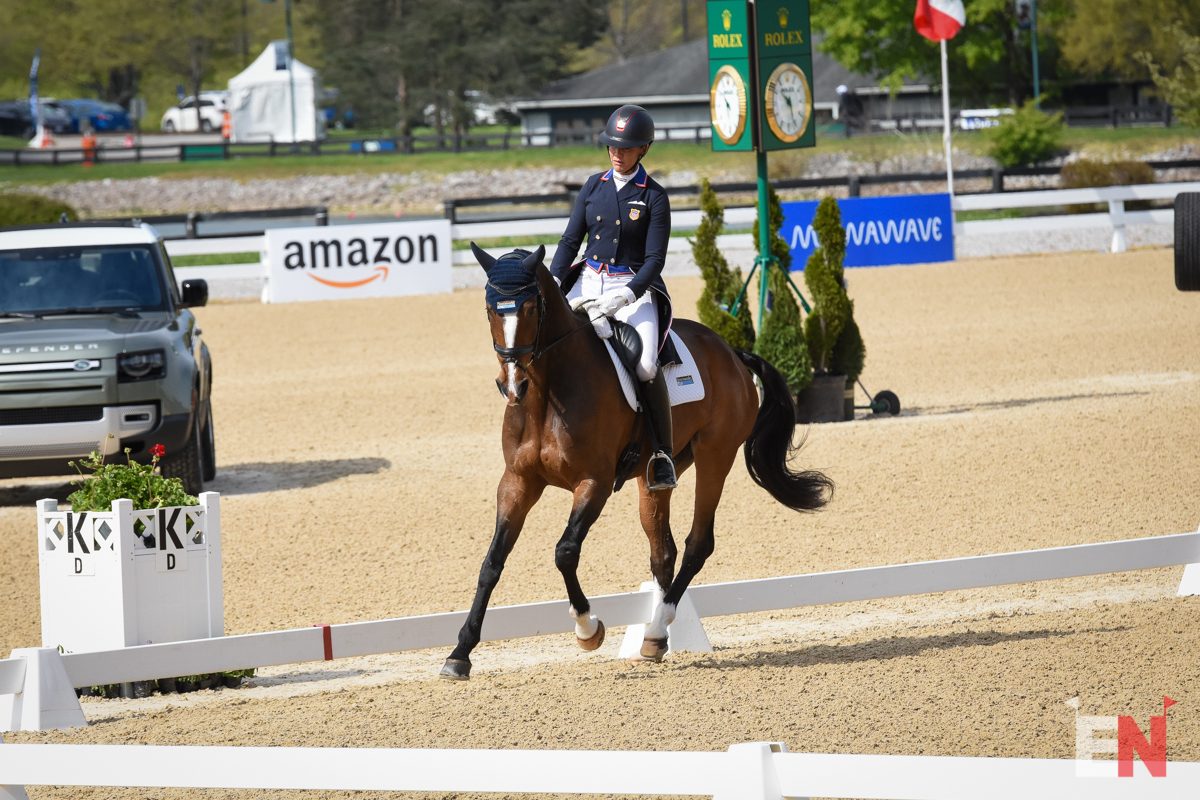 Not many surprises to be found at the top of the early leaderboards at Jersey Fresh International, presented by B.W. Furlong and Associates and Zoetis Equine, where the CCI4*-L and CCI3*-L kicked off their dressage phase today. With a little over half of each division riding their dressage tests today, it’s Tamie Smith and Ruth Bley’s EnVogue in charge of the CCI4*-L with a score of 24.3 while Phillip Dutton and Caroline Moran’s Quasi Cool will take the early lead in the CCI3*-L on a score of 27.4.

Fresh off of a second place finish in the CCI4*-S at Kentucky last month, EnVogue (Earl – Laurena, by Laurie’s Crusador) was originally penciled in for her CCI5* debut in Lexington before Tamie elected to do one more CCI4*-L instead. After a gutsy performance over a testing (to say the least) cross country, Tamie said she was maybe kicking herself a bit for dropping down a level – but without a doubt this weekend will still be a great challenge for the 16-year-old Hanoverian mare’s spring season finale. It’s likely to be a bit different of a track than the mare saw in Kentucky; Jersey Fresh is known for its twisting and turning nature, but a heavy downpour yesterday should make for some excellent ground for those looking to make a crack at the time.

Today Tamie and EnVogue shaved 1.1 penalties off their Kentucky score, picking up a few extra marks in their walk and canter work, among other movements, compared to their Kentucky effort. 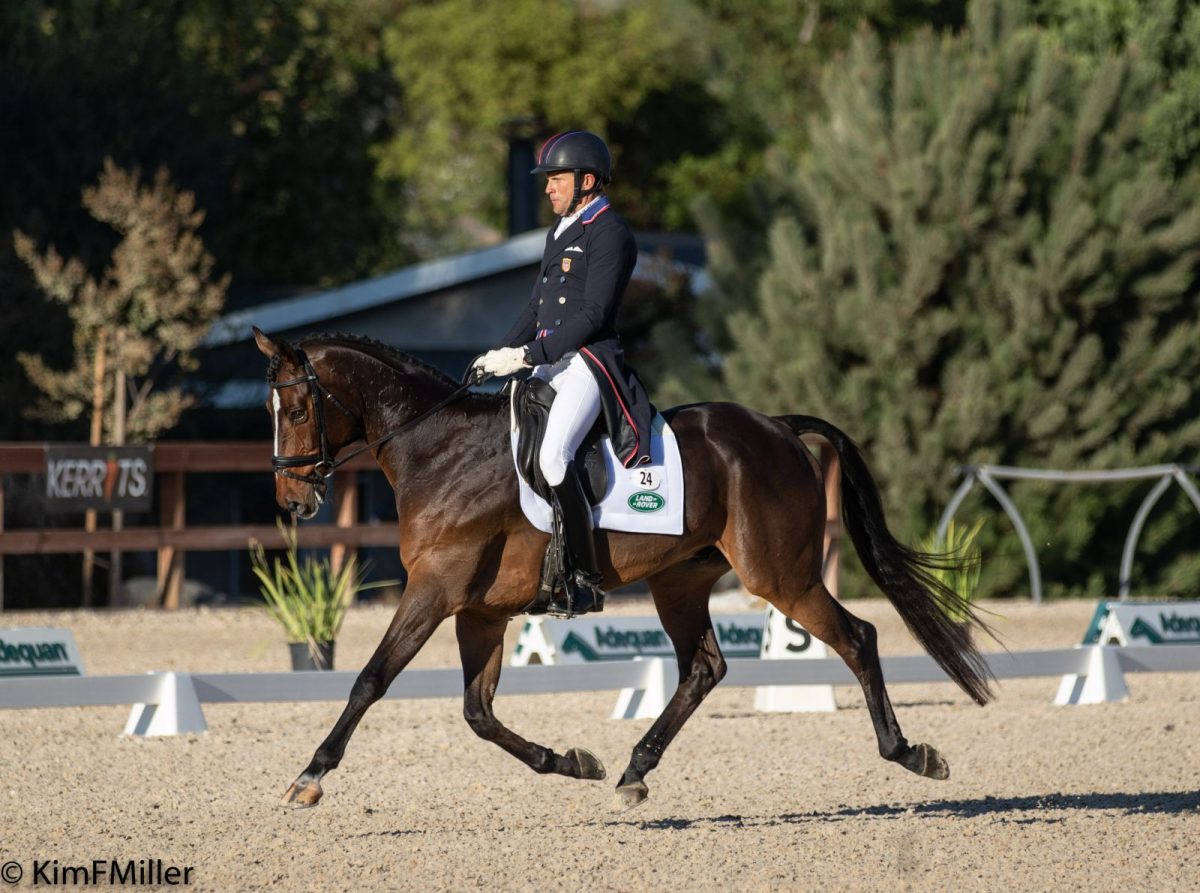 Boyd Martin missed his last prep for this weekend with Luke 140 after two rather spectacular crashes on cross country at Kentucky (he opted to withdraw Luke 140 ahead of cross country to give himself time to mend), but he says it may have worked out just fine after all. “To be honest, I wasn’t too keen to run him at Kentucky as I don’t really like to run them two weeks apart,” Boyd said. “I think it’s a bit tough on their bodies. So it was actually good taking him to Kentucky and having that intense week of building up to a dressage test.”

Boyd and Luke 140 (Landos – Omega VI, by Limbus), who is owned by the Luke 140 Syndicate, shaved 5.5 points off of their Kentucky score, solidifying Boyd’s thought that the abbreviated trip to the Bluegrass at least helped him pinpoint the 10-year-old Holsteiner gelding’s weaknesses. But, he says, there aren’t many weaknesses to list on this one.

“He’s just a horse that oozes with class,” Boyd said. “He’s one of the only horses in the stable that really doesn’t have a weakness. He’s a mover, he’s a galloper, he’s young and fit and sound.” Despite some early growing pains – Boyd says it’s really about a two year period that it takes to really build a partnership, and this one took some patience – the pair has begun to gel, he says. Their trip to Galway last fall, where they notched their first 4*-L win together, was proof that things were coming together. “For sure at the beginning we butted heads a bit…little did I know that an overenthusiastic, feisty horse was my cup of tea!,” Boyd reflected. 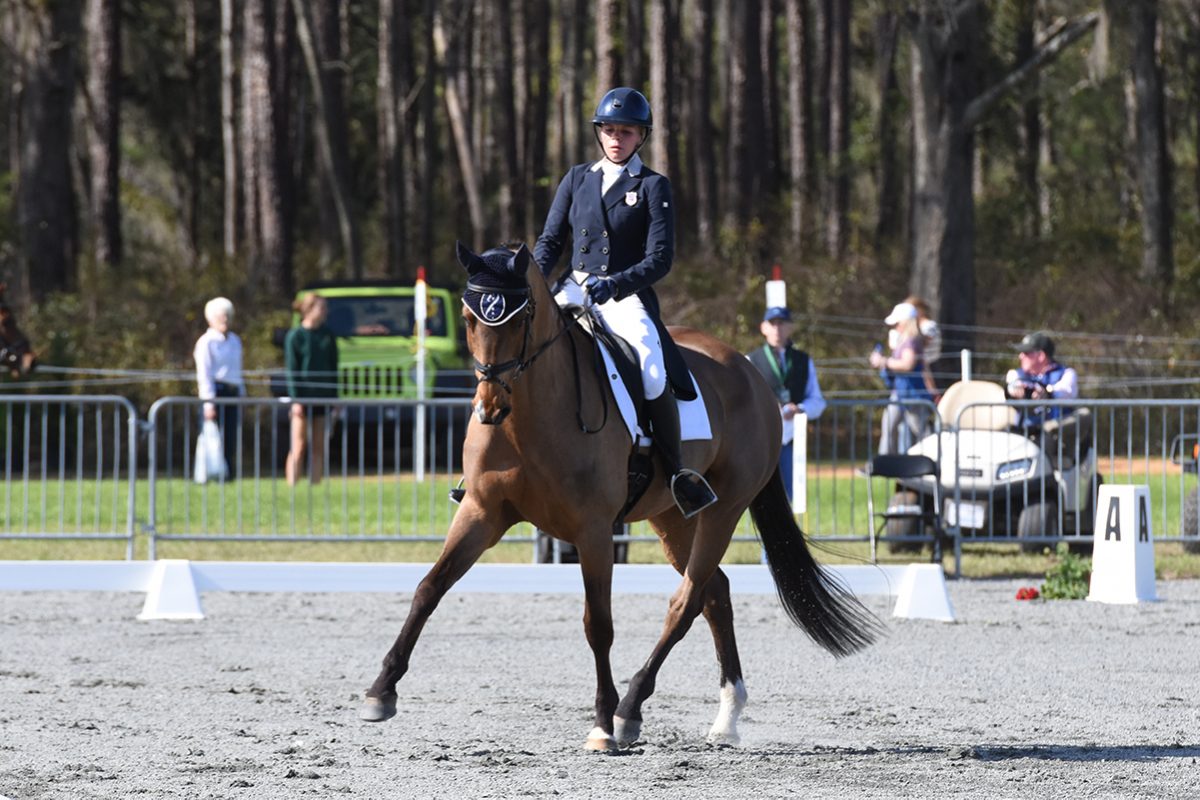 Another pair who saw great success in their final run before Jersey, Kentucky CCI4*-S winners Alyssa Phillips and Oskar (Coriando – Nicole, by Marlo) will take early third place thanks to a score of 28.1. This is another pair that shaved some points off of their Kentucky score and Alyssa improved her score by 4.2 penalties. This weekend’s dressage score is the best the pair has earned at the 4* level – but it didn’t come without a bit of drama on the front end.

After returning home from Kentucky, Oskar came in from turnout with a swollen face. Alyssa was initially worried that his pasture mate may have kicked him and broken a tooth or a cheekbone, but after investigation by her veterinary team Oskar was found to be no worse for the wear. To avoid causing additional discomfort, Alyssa found herself doing some of her final flatwork preps in a halter – but hey, it seems to have paid off it its own way today!

“He’s a really chill horse, so it works out fine for him,” Alyssa commented. “And he was really good today. He was definitely more put together than he was in Kentucky. He’s pretty strong, so we’re always working on putting the pieces together and keeping the energy.”

Laughing when asked where she was able to get some points back today, Alyssa remarked that she was relieved to have done her extended trot in the right place this time. “At Kentucky he was a bit fresh, so it’s a little hard because he does get pretty strong. But he was in a great frame today and I could really ride him and that’s what we’re always working toward.”

The top five is completed by Clayton Fredericks and FE Coldplay (4th – 29.5) and a two-way tie for fifth between Jenny Caras and Trendy Fernhill and Canadian rider Karl Slezak and Fernhill Wishes, each sitting on a score of 29.6.

It’s also an emotional weekend for Canada’s Kyle Carter, who brings forth Christy and Ward Edwards’ Reddy or Not for her second go at the CCI4*-L level. It was three years ago today that Christy Edwards was tragically killed in a car accident, and thanks to the ongoing support of her husband, Ward, Kyle and “Reddy’s” partnership has continued in her honor – and this mare has, like a fine wine, just continued to get stronger and better. Despite an early end to their weekend in the Kentucky CCI4*-S at the final water, Reddy made all of the hard things on the cross country look easy and turned in a big score improvement on the flat in today’s test. Kyle and Reddy or Not earned a 29.9 for early seventh place.

3 years ago today we lost Reddys breeder owner and biggest fan to a tragic accident. So many people miss her and the joy she brought to us all. This is for all of those who have been watching and supporting the dream Christy Edwards had of seeing her favorite homebred at these competitions. ❤️❤️ to you all. Mikki Johansen
Ward Edwards and so many that she touched

The goal has been to get into the 20s and today we did!! First time at this level for that but she’s been developing to it for a bout 6 months. After Kentucky where we got a 36 I said to somebody she’s is so good 4 out of 5 times I’m not going to worry about it so I did what we had been doing and had Jen keep helping me chip away the problems. As usual it worked. Thanks Jennifer Carter lots to do but great way to start.

Riding in honor of the late and legendary Anissa Cottongin this weekend is Jon Holling, who pilots Prophet – who was bred by Anissa – in his CCI4*-L debut. The 9-year-old Trakehner gelding by Tatendrang has been with Jon since his 4-year-old year, and it was always Anissa’s pleasure to follow the gelding as his career progressed. “I didn’t know her well before Prophet at all, and I got to know her very well,” Jon told The Chronicle of the Horse last month. “She was a friend. She would show up to any of the events she could show up to, but in the last year or so that got harder for her. She would do everything she could do to be there. I would send her videos on Facebook of him working, and she would get videos of him when she was in the hospital.”

Jon and Prophet, who is owned by Jon and Chuck McGrath, are just behind fellow Floridian Kyle Carter in eighth place on a score of 30.9.

We’re likely to see a few pairs come up to challenge the leaders in the final day of dressage tomorrow; notably, Tamie Smith will likely be in a duel with herself aboard another Ruth Bley-owned horse, Danito. Canada’s Colleen Loach and Vermont, who impressed more than a few with his performance in the Kentucky CCI4*-S, will also be ones to watch tomorrow. 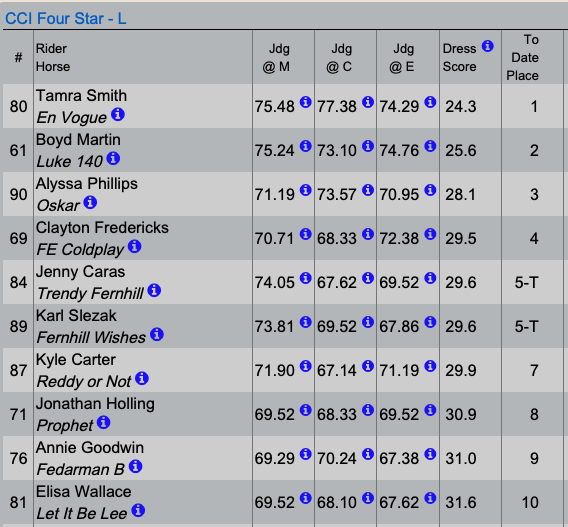 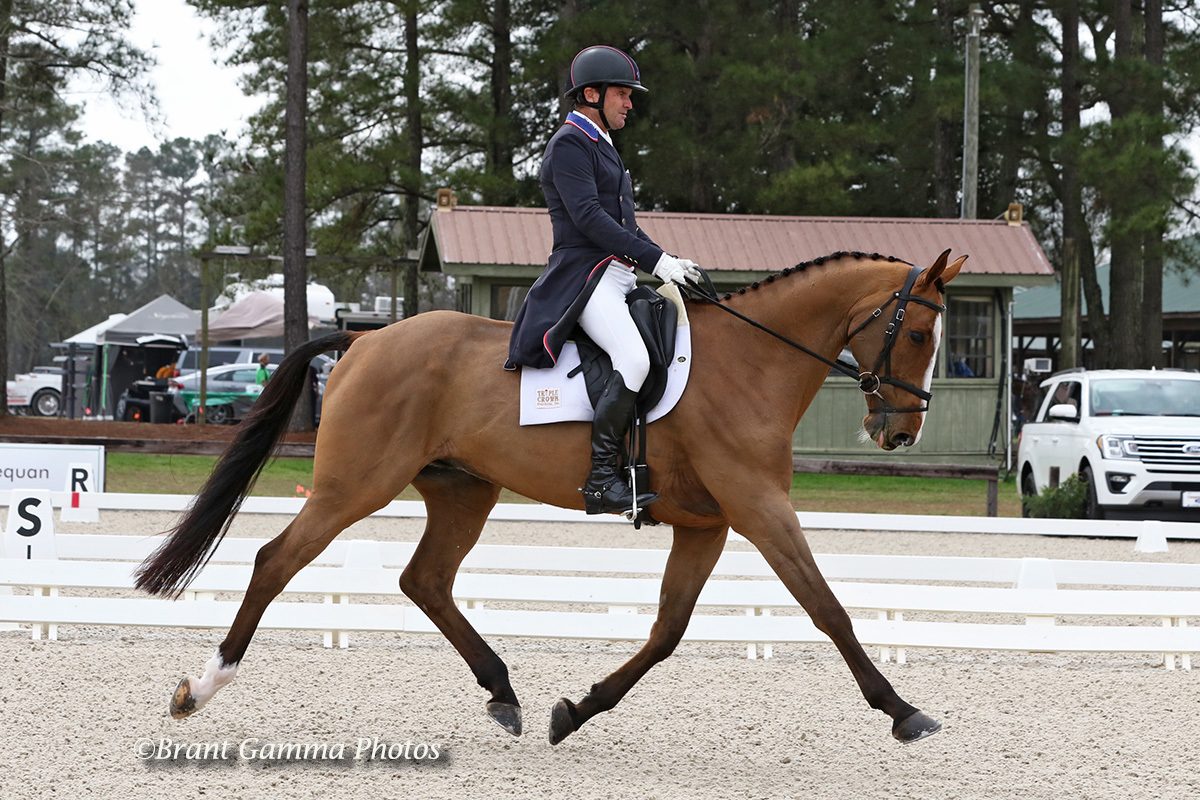 Phillip Dutton has another young horse to keep an eye on this weekend in Caroline Moran’s Quasi Cool (Quo Vados – B-Estelle, by Lord), a 10-year-old Holsteiner gelding formerly campaigned by Dirk Schrade, Sabrina Mertens and Ben Leuwer. After importing the gelding in 2019, Phillip wasted no time getting acclimated and is now poised to navigate the gelding’s CCI3*-L debut this weekend. A dressage mark of 27.4 will be enough for the early lead – though Phillip is well aware that more potential is yet to come as the young gelding’s career progresses.

“I’m really excited about Quasi’s future,” Phillip commented. “He’s such an athlete with an incredible temperament. Today was certainly not a perfect test, so there’s plenty of room to improve as he matures and gets stronger.” 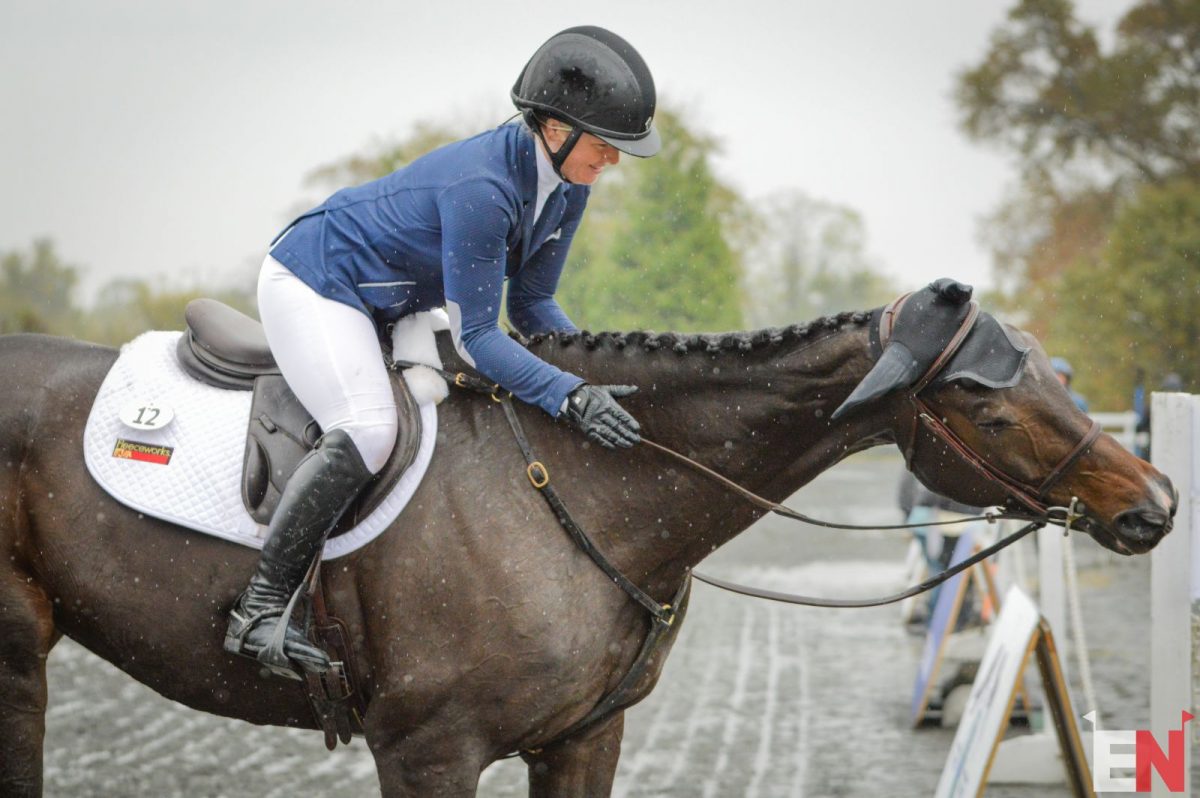 It’s been fantastic to see Caitlin Silliman and Ally KGO‘s (Hirtentanz 2 – Annabel Lee, by Butow) partnership solidify over the past seasons, and this weekend marks the second start at the CCI3*-L level for the pair. Ally KGO, who is 10 this year, was found at auction in Wisconsin by the McCue family and originally produced through Training level by Morgan McCue before going to Caitlin. Earlier this year, Caitlin formed the Ally KGO Syndicate to secure the ride on the mare long term, and their dressage score of 27.5 is good for second place after day one.

Daniel Clasing, fresh off of a great weekend with his CCI5* ride MW Gangster’s Game, will be in early third place in the 3*-L aboard Jennifer Larkin’s Olney Uncle Sam on a score of 28.0. You may recall seeing Olney Uncle Sam out with Emily Beshear before going to Daniel’s program this season. They’re coming off a final prep at Fair Hill last month, where they contested the CCI3*-S. 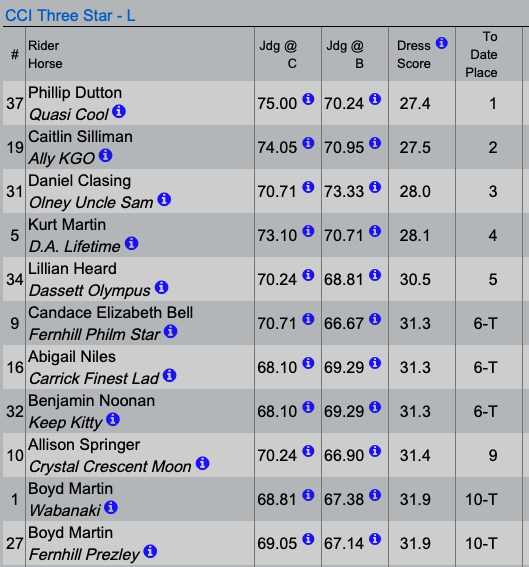 We’ll see the remainder of the Long division horses do their dressage tests tomorrow as well as the Short format divisions – both a CCI4*-S and a CCI3*-S are running this weekend, too. I’ll be back tomorrow with a CCI4*-L cross country preview courtesy of Zach Brandt and Audrie Stanka.

Dressage day for #LetitbeLee. He is number 81. #RiotGeartheOldenburg goes Friday at 11:32 and is number 136….

Posted by Elisa Wallace Eventing on Thursday, May 6, 2021