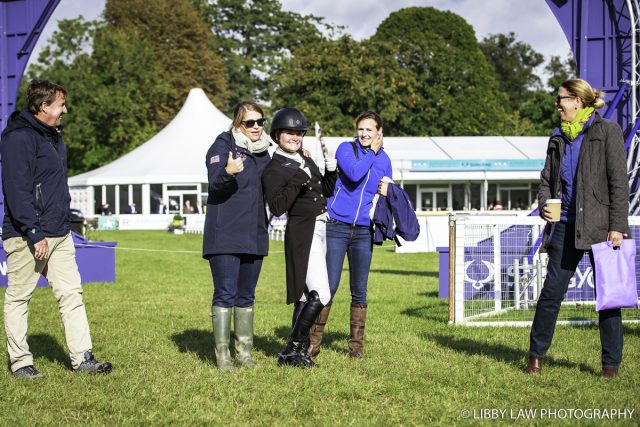 ERM afternoons are always a bit of a pressure cooker, as the seeded order of go means that the crown is passed from rider to rider in quick succession as increasingly competitive scores are thrown into contention.

This afternoon’s competition was no different. The first rider in the ring after the lunch break — for the full morning report, click here — was China’s Alex Hua Tian, riding Don Geniro. The pair, who won the Bramham leg of last year’s ERM series, had obviously found one of the better burger vans on site and delivered a sterling performance, earning them a 36.4 and putting them nearly six points ahead of the morning leader, Sarah Bullimore. 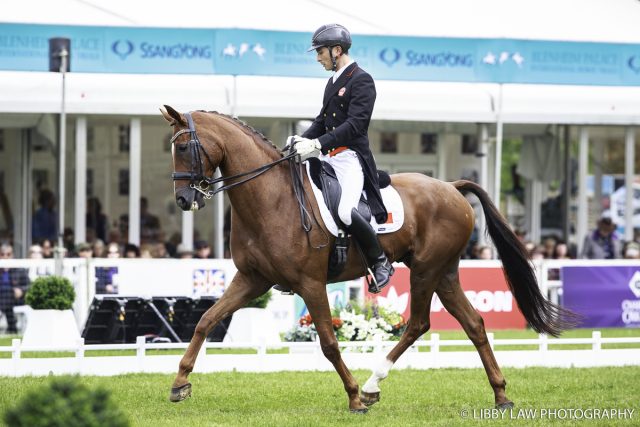 The Don is BACK. Photo by Libby Law.

“I’m so delighted, because the horse is so scopey on the flat and we’ve always known it,” said Alex. “He had some crazy scores at two-star and some good scores when he first moved up to three-star, but last year he just went a bit wild — last year and this year we’ve had Psycho Don! We’ve really worked on it and finally he’s able come into the arena in an atmosphere and do what he does. He had a mistake in there, in one of his changes, but I couldn’t be happier with him.” 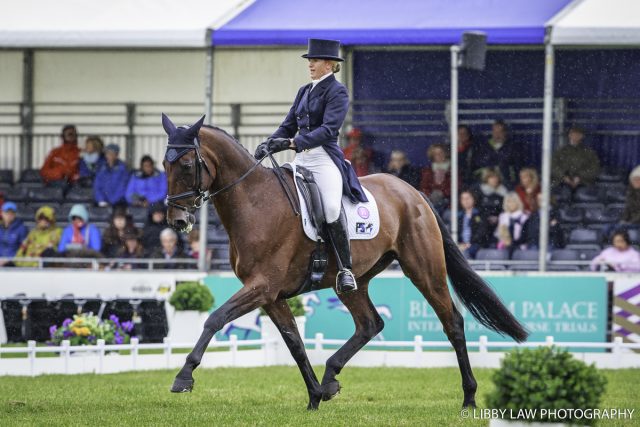 Treason is the reason for Sarah Cohen. Photo by Libby Law.

Sarah Cohen, known as Cutty, has been a firm favourite in the series this year, although her approach to eventing has changed over the past few years. Formerly a full-time rider for sport horse operation Preci-Spark, she made the decision to focus on motherhood, but the horse with which she had built up such a partnership stayed with her. He’s now her only horse, and together they’ve notched up consistent results all season, including a win at the Wiesbaden leg earlier in the summer.

“We just had this special bond when I first started riding him. When I left Preci-Spark a few years ago his owner offered to let me have him at home — not necessarily to event, I could have taken him to do whatever I wanted to, which is lovely,” she said. “He’s just a nice person to have about — the kids lead him around, and he loves the attention and he’s great to have around. I would have preferred to do a better test, but he’s been so consistent all year that I can’t complain. As long as he does his usual thing tomorrow and I stay switched on and ride him, we should be alright!” 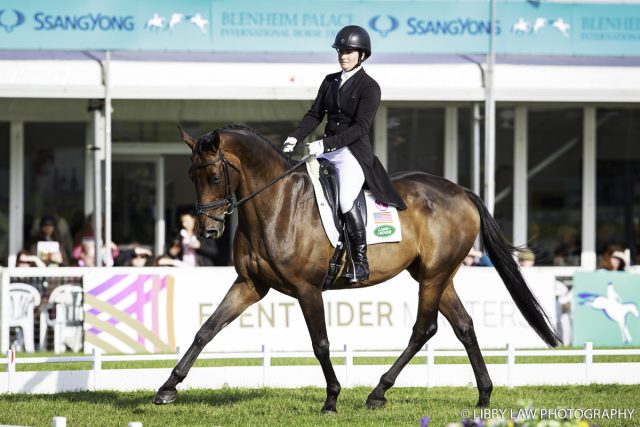 Hannah Sue Burnett and Harbour Pilot make their final trip between the boards in their UK season. Photo by Libby Law.

Hannah Sue Burnett rode a test in two halves — initially tense, but settling into a beautiful cadence — aboard Harbour Pilot to score 48.8. They lie in 26th overnight, but their previous track record at Blenheim, a fifth-place finish in the CCI*** last year, should stand them in good stead for a climb in tomorrow’s most influential phase. 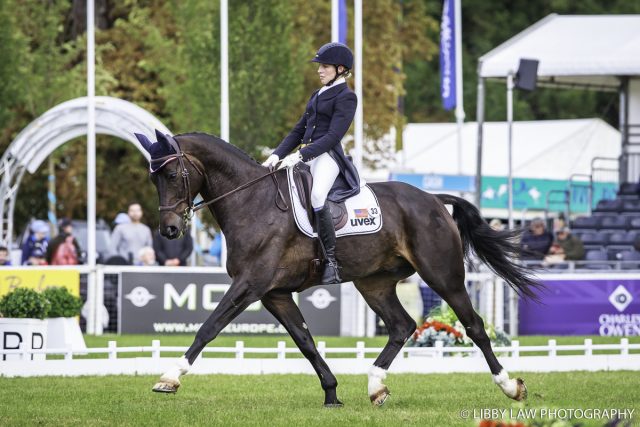 The Brad Pitt of the horse world: Fernhill By Night struts his stuff with Liz Halliday-Sharp. Photo by Libby Law.

Liz Halliday-Sharp and the stunning Fernhill By Night sit in 9th going into tomorrow’s competition, having scored 40.3 in a fluid test with some minor errors.

“I’m pleased — there were a few bits that I’m annoyed with, because I’m a bit of a perfectionist,” said Liz. “Blackie can do such a good test, but he’s not been in that big an atmosphere since Rolex. He’s quite a lazy horse, so I purposely didn’t do any arena walks, so he was a bit like, ‘woah!’ He can be a bit cheeky in certain situations. There were some major marks lost that we’d never normally lose; he’d never normally jog in the walk but he was anticipating a bit. He’s normally so quiet — he was quite spicy today! My goal was to be in the 30s but we didn’t quite get there.”

Royalty looks good on you! Fernhill By Night surveys his territory after earning a 40.3 with @lizhallidaysharp, putting them into 5th currently in the @eventridermasters at @blenheimhorse 🇺🇸 #goeventing #bpiht 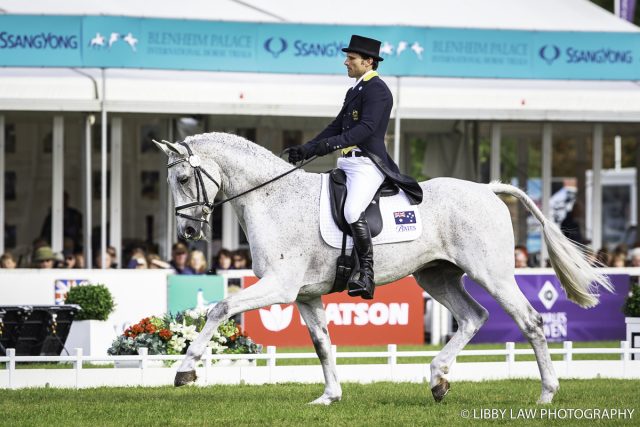 Shane Rose gets his campaign for a podium place off to a flying start with CO Qualified. Photo by Libby Law.

Australia’s Shane Rose comes to Blenheim fresh from his win at the penultimate leg at Blair Castle, and he didn’t disappoint, delivering a 35.8 with CP Qualified.

“He was super — he felt really good from the moment I got on him, really soft in his mouth and taking me forward. Then I really just had to present him in that fashion,” said Shane.

“Not at all — I want to do well, and if I do well then it gives me a chance to get on that podium,” he explained. “It’s a bit annoying, actually. I tried to have Happy Times [Sam Griffiths’ top horse, who Shane has been competing while Sam is out of action] in the ERM at Gatcombe, but instead he went in the Advanced and won it. If he’d been in the ERM he could have put a bit more pressure on Gemma Tattersall. But now, it’s just one step at a time. If you do well in each phase then you stand to claim the rewards at the end of it. I think [course designer] David Evans has given riders a few interesting opportunities to really go for it, so I’m going to try to do that tomorrow.” 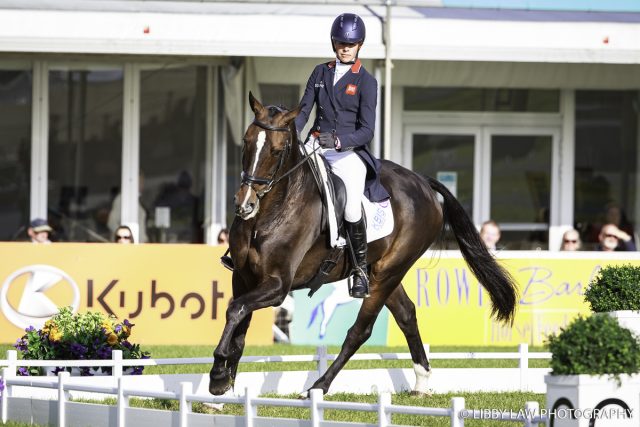 Izzy Taylor leaves nothing to chance with a foot-perfect test aboard Be Touchable. Photo by Libby Law.

But the top spot was to be taken away by the slimmest of margins as Izzy Taylor continued her recent incredible form and posted a 35.7 with Millstreet CIC3* winner Be Touchable.

“I’m delighted with him,” she said. “He’s always shown that he has three beautiful paces, so you’re halfway there. His brain’s very good, and since I’ve had him he’s upgraded very quickly, which is great in some ways, and then you pay for it in other ways. This year I would say he’s really become an established three-star horse and I can really ride him and get as much as I can out of him. What’s exciting is that there’s definitely still more to come from him. He loves his job, all three bits of it — he loves showjumping, and he loves his cross country.”

Be Touchable was produced to Intermediate by his owner, Sophie Dodds, before university commitments meant she had to pass the reins to another rider.

“I took him to his first Intermediate and came second and then thought, ‘right, that’s enough!'” said Sophie. “My mum absolutely loves Izzy, and we both thought that she’s such an amazing rider, especially cross country, so we thought we’d give it a chance — it was just lovely that she answered the phone!”

You can catch up on all of today’s ERM action at eventridermasters.tv, and make sure to tune in tomorrow to see the excitement as it happens, with showjumping starting at 10.30am BST/5.30am EST. Go #ERMeventing! 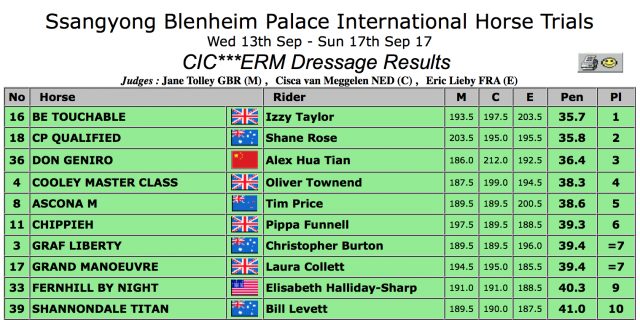 The top ten after the first phase of the Event Rider Masters at the SsangYong Blenheim Palace International Horse Trials.