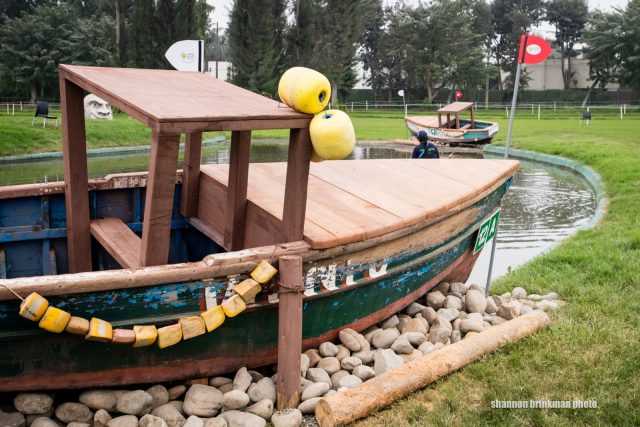 There’s one main consensus regarding Jose Ortelli’s cross country course at the 2019 Pan American Games: there’s a lot to do very early on. The men/women will be separated from the boys/girls as early as the first minute or two.

The full distance of the track is 4520, which is designed for a speed of 550 meters/minute with an optimum time of 8 minutes and 14 seconds. There are 26 fences (35 efforts) sprinkled throughout the twisting track. Click here for our fence-by-fence preview.

If you want even more detail, Javier Jeri Leigh has laid out direct and optional routes at the main combinations:

As we eagerly await the start of cross country, we’ve rounded up Team USA’s thoughts ahead of Saturday’s challenge:

Boyd Martin: “I think the course is as hard as I’ve ever seen at this level–the three-star long level–and I’m on probably the most experienced horse in the field. There’s a lot of places where you could have a runout, and there’s also options that aren’t that long, so it’s going to be an exciting day of cross country. Obviously, being a team contest, we really want to have all four horses go jumping clear, and then it’s a matter if you decide to go very, very fast the jumps get much more difficult.”

“My game plan would be to start out a little steady and get him settled in, and get through the first five, six fences. Then, really open him up where the galloping is good and really slow down where there’s complicated jumps. I’m just terrified of a slip up. You just have to ride very, very, very well for about eight and a half minutes, and believe in your training. Believe in your horse. Also, be in the moment because it’s not going to go to plan or ride exactly how it’s walking.”

Doug Payne: “It’s pretty wild. It beats you up in the first two minutes–it comes at you really quick. I’m lucky enough to be on probably one of the best jumping horses here, so we’ll go at it and just try to be as smooth and soft as possible in the first minute or two minutes. We’ll probably be a little back on the clock at that point, but I think from that point on you can grow and build. I think it’s going to be great for the sport and should be a hell of a lot of fun to ride.”

Tamie Smith: “I’m really excited to be jumping because we’ve been doing  a lot of dressage. The course looks big, and it looks technical, and it looks like we have a lot of work to do. I think the first minute and a half is no joke. It’s very quick–we have our first serious water jump right at the very beginning of the course. I don’t think the horses are going to be ultimately focused by then, so there will be a lot of instinctive type riding happening both from the horses and from the riders. So I think that will be very influential.”

“I think after that the questions are max height, max technicality–it is a championship course, so it’s the toughest three-star long I’ve ever seen, and you just have to be on your toes and ready to come for whatever’s out there. I think we’re all up for the challenge.”

Lynn Symansky: “It gets better every time you walk it. The first time you walk it you’re really trying to get your bearings out there. It felt like Aachen combined with Pau in a short track–it just kept coming at you. You have to take time and know every single post you’re riding to before and after because there’s not a lot of places to make up time on a track like that. Where you make up time is being as efficient as possible in all of your lines.

“Since I’m the first out, we won’t have any information on how it rides, so I’ll have to be even more prepared to exactly what my plan is going to be for that horse. Where you go a little later on, you have a plan for your horse, but you still have to be opened minded about seeing how some stuff rides, how it suits. We’re all used to being in all sorts of positions. The good news is, I’m used to going first and relying on having an honest horse. I know he’s going to be a bit green in this environment and in this type of track, but you have to rely on the training and the partnership at that point.”

Safe and happy rides to all!