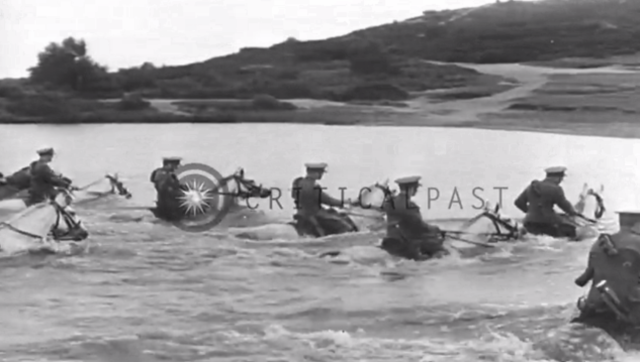 Modern eventers may be a little bit wackadoodle-doodle-doo, but it’s not our fault, really. The condition is hereditary, and if you’ve been following along with this week’s Cavalry Training Tips series you know who left us their insanity inheritance.

Cavalrymen, bless ’em, may be the godfathers of our sport but they sure had some unique ways of doing things. From death-defying drop banks to gridlines that are literally on fire, this week we’ve been having a look at the madness that is military horse training.

Water jumps are standard cross-country fare at every level these days but this hasn’t always been the case. Let’s kick things off with a canter back in time to the eventing competition at the 1936 Berlin Olympics.

The cross-country course was a doozie, a five-phase test that spanned 36 kilometers (22 miles) with a time limit of just over two hours. It took two years to construct and contained many “new and unusual kinds of jumps,” including fence #4, the WORLD’S FIRST OFFICIAL WATER JUMP.

Many riders, not knowing how to approach such a jump, ran at it full-tilt, clearing the hurdle only to succumb to the drag of three-foot deep water and treacherously boggy footing on the other side. According to the official IOC report, of 46 horses who jumped into the pond, there were 18 horse/rider falls and 10 rider falls.

It’s worth noting that Germany wasn’t exactly in its “ethical prime” during this era. There was widespread speculation that the Germans, who claimed individual and team gold medals in all three equestrian disciplines, had known such a jump would be on the course and thus claimed an advantage.

You can see footage of the obstacle here. I can’t decide whose save is more amazing: the Italian’s…

But for sure my favorite moment is when the soggy rider marches off in disgust when his horse decides, post-fall, to seize the moment for a water break.

To their credit these are war horses we’re talking about, not show ponies. It’s not like they had never gotten their feet wet before. But whereas you and I might introduce our green mounts to the joy of water with a creek crossing or splash through a baby water complex, a cavalry horse’s initial experience with water may have been a little more belly flop than swan dive.

As time went on, however, it appears that the cavalry came to embrace a happier, or at least less traumatic, approach to water familiarization. Peer pressure for the win!

There’s one in every crowd.