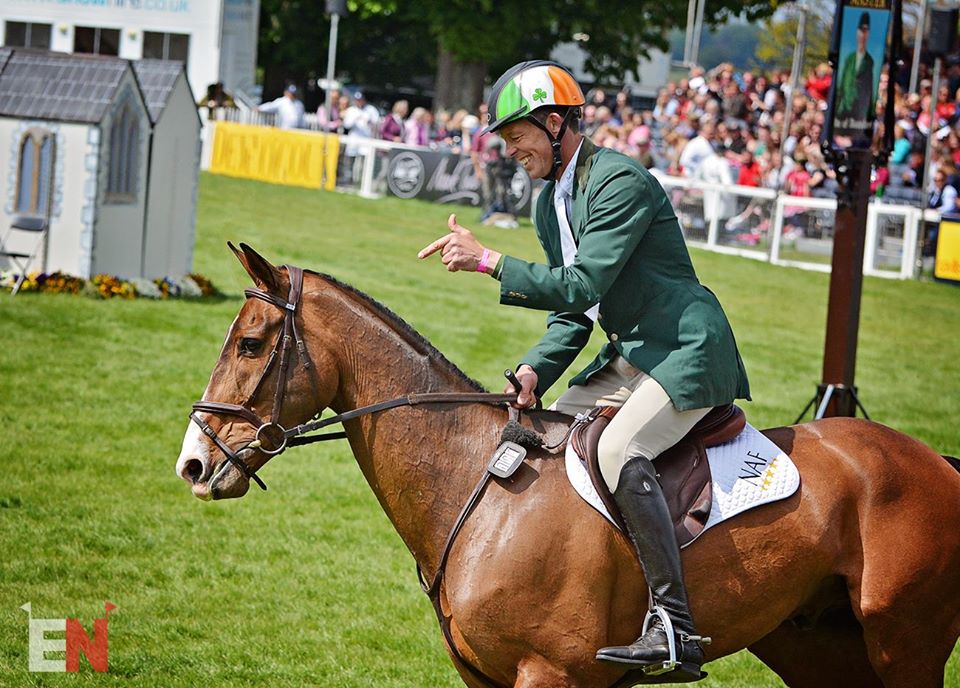 It’s been just over two years since a fall while competing at Tattersalls rendered Irish Olympian Jonty Evans unconscious with a traumatic brain injury that would leave him in a coma for over a month. It was a routine competition for Jonty and his longtime partner, Cooley Rorkes Drift, beloved in his own right after a popular crowdfunding campaign helped Jonty keep the horse in his yard. But as is the case with many injuries, just the wrong knock to the head would send Jonty down a completely different path than the one he’d set out on.

Nonetheless, Jonty says now, he never lost hope. And it’s that hope – and a healthy determination and sheer will – that has brought Jonty back into his body, with which he had to get reacquainted in the aftermath of the accident. In time, the light he held onto waiting for him at the end of the tunnel came forward to meet him. He and “Art” were reunited and back in the competition ring together.

Jonty says he doesn’t remember anything from that weekend at Tattersalls. Of course, the inquisitive nature of humans elicits the sharing of information, so he knows now. But his memory, perhaps blessedly, escapes him. The only thing he remembers is that he was competing at Tattersalls.

This makes for a strange experience, one that Jonty finds difficult to explain now, waking up to an entirely altered reality. “It’s not like when you wake up from a coma, the lights just flick on,” he explained. “The lights come on very, very, very slowly.”

Indeed, it was an arduous recovery process for Jonty, the severity of whose injury required him to relearn how to walk and use his body. But even during the most difficult therapy sessions, Jonty knew: he would ride again one day. And on October 24, four months and twenty days after the fall, Jonty walked out of the Sid Watkins Building at The Walton Centre. Jonty would continue his rehabilitation through programs at the Oaksey House and ongoing physical therapy.

It was a stocky horse called July that took Jonty for his first ride upon returning home to Gloucestershire in November. “He was 15 hands tall and about 18 hands wide, so the idea was that if I fell I wouldn’t have far to go,” Jonty laughed. In less than a week, Jonty grew bored and said he wanted his own horse back. It was time. Six months post-fall, post-coma, post-recovery, and Jonty was back astride Art. There is no greater motivator in life than love, and certainly that love for the horse is a large part of what kept Jonty going in even his most desperate moments.

Jonty still has difficulty expressing just how much he cares for the Irish Sport Horse gelding who stole all of our hearts but none so much as his rider’s. “What he’s done for me, in getting me back, I can’t even put it into words,” he said. “I could cry just thinking about him, and I’m not a person likely to cry.”

It wasn’t long before Jonty began tackling more challenges with his riding. His elation was evident every time he’d post an update in the Facebook group, Art’s Amazing Family, made up of contributing members to the crowdfunding campaign. Somewhere amid all of the milestones, Jonty ran a half marathon. His spirit had already proven to be unbreakable, yet here he was demonstrating it time and time again.

I think that maybe people would like to know what I’m up to. Unsurprisingly my family have been amazing my Mum, Maggie,…

I am hugely grateful to everyone who has helped me get this far, and I’m sure there’s a lot further to go but everyone…

It’s approximately 8 and a half months since the accident that with out doubt changed the equestrian side of my life. I…

Today was a good day. made even better by Pippa Funnell winning Burghley. We completed the Great North Run in 2.26 hrs…

Of course, Jonty says he wishes he were competing at a higher level. But that’s the thing with goals, he says. “If you didn’t achieve them, it became a nuisance and it became very hard to deal with the fact that you hadn’t achieved them.”

So instead of telling me of his plans to contest this event or that, or return to the international stage at a certain point, he tells me of his plans to become a true master at each level. Riding is an art, is it not? Jonty says his focus has shifted to perfecting his skills, letting this notion guide him rather than the concept of big fences and equally lofty goals.

“Rather than having a goal, I hoped that I could become established at a level and show that I’m established there and then move on,” Jonty explained. “That’s much more my plan of attack now. If I can start to establish that over three or four events, then I can start to think, ‘Ok, maybe it’s in place.’”

It’s a great reminder for all of us. And that shift in focus has rewarded Jonty with deeper insights into his riding. He still struggles with balance and coordination and works daily with a physical therapist to remedy this (“It’s something I’ll never stop working on,” he says). But more and more, he finds little tidbits of knowledge born only out of experienced feel are returning to him.

“It’s not really relearning something, it’s more of a reawakening or rediscovery,” Jonty said. “It might be described as a light coming on slowly or a mist fading. Suddenly you remember something you used to do or a feel you used to have.”

It’s still frustrating, having a brain that knows what must be done but a body that can’t quite meet the challenge yet. But Jonty maintains a positive attitude. He’s been to hell and come back from it. These challenges? He’ll welcome them with open arms. “You have to come to terms with who you are and what’s happened,” he said. “And that’s quite hard. I wouldn’t wish this injury on my worst enemy.”

Posted by Badminton Horse Trials on Sunday, May 5, 2019

At the end of the tunnel, Jonty says he’s always seen the light. Beyond that light waited the brown horse with the biggest heart. A large supporter of Jonty’s, Jane Moss, brought Art to Andrew Downes’ yard “to keep him ticking along” during his rider’s recovery. An entire community rallied around Jonty and Art, celebrating every milestone, large or small. And one day in August the following year, Jonty and Art made their return to competition.

Naturally, Jonty laughs, he fell off on cross country. But he was undeterred, and the pair have since completed nine events at the Novice and BE100 levels. As for what’s next? Jonty recently moved into a new yard and has opened his doors to training clients once again. Art has the best stall on the property. Jonty takes things one day at a time, all at once disbelieving and acutely aware of how much of his life has returned to him since his accident. “It has been a big thing for me mentally to believe that anyone will ever send me a horse to ride again but I’ve got to believe and keep pushing forwards.”