EN TRENDS:
Getting to a CCI5* is always an enormous undertaking — but never more so than in a pandemic year. Our own Tilly Berendt is on the road to Luhmühlen with Great Britain’s Mollie Summerland and her horse Charly van ter Heiden – and she’s documenting the whole journey as it happens. Welcome to part seven: wherein they really, really go for it.

Part Five: In Which the Price is Right 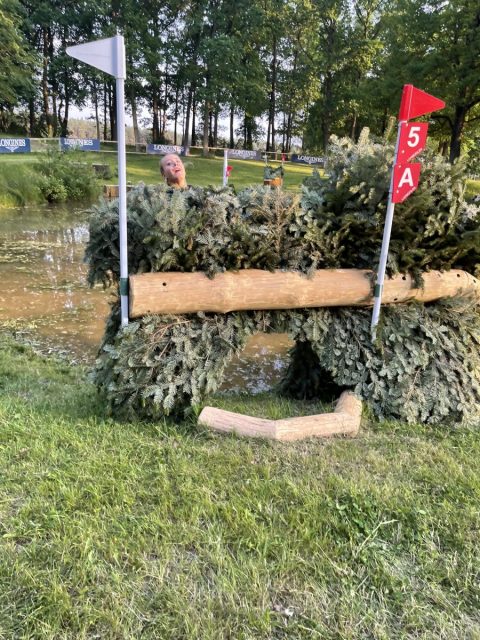 Mollie attempts to jump one of the beefy brush fences on foot, but evidently hasn’t got the right footwear on.

You’ll have to forgive me for being a little quiet on the blogging front since the first horse inspection, because since then, life has been, well, absolutely manic.

Throughout my career as a journalist, people have constantly told me that I’m mad for doing both the reporting and the photography while at an event. They have a point: both jobs require prioritising completely different things. The best event photographers stake out which fences will photograph best at certain times of day, and pre-plan their angles to catch horses at their peak against uncluttered backgrounds. Reporting, on the other hand, requires being able to see how the course rides in its entirety, and positioning yourself to be able to speak to as many riders as possible after they finish their round. It’s best done by parking yourself at the riders’ tent at the finish, which gives you the added bonus of being able to guage the general feeling and sentiment of the day. If you venture out on course, it’s ordinarily to go stand for a while at the most influential combination and see what makes it so tricky. Those don’t always tend to photograph well – particularly if you need photos of things going well.

For me, attempting to do both means running around to whichever fence I can get to easiest, while keeping a livestream running on my phone and making constant mental or physical notes to flesh out my report later. The photos are a bit of a gamble, as is being able to locate riders after the fact for all the important chats. Then, of course, it’s a real frenzy and mentally exhausting to edit all the photos you need, transcribe your interviews, find an angle, and flesh out a story with the overarching feeling of the thing. If you’re doing daily online reports, rather than working towards one overall write-up for publication, it’s even tighter on time. I often work from 7 or 8am through to 10pm without stopping; as a result, I take up a ferocious smoking habit solely at events so I can quell my hunger and keep on keeping on.

Adding a horse and rider into the mix is another level of intensity, mentally, emotionally, and physically – even when the rider is used to doing her own grooming and warm-up. Top that off with 34C heat (look, I’m a sun and sand girl through and through, but even I object when the temperature looks like a bra size) and it becomes the ultimate dizzying juggling act. 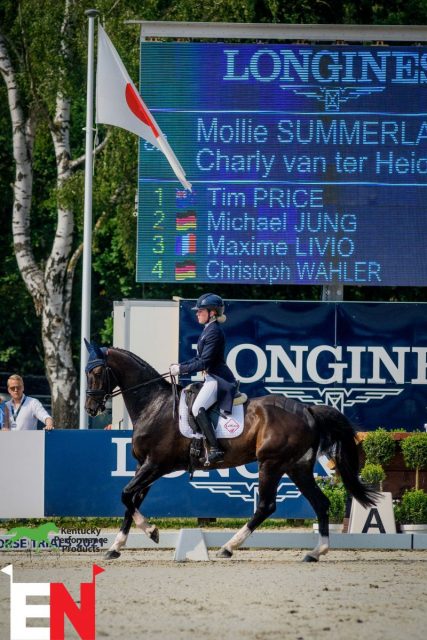 Dressage day, at least, meant that all my duties were in a fairly compact area – though I had to utilise the short judging breaks wisely to quite literally sprint back to the stables, borrow a much-too-tall bike, and attempt to get back down to the arenas balancing buckets of water and grooming tools from the handlebars. Once Mollie made her way down to the rings, it was a case of going back and forth, keeping an eye on whatever test was going on between the boards and trying to ensure Mollie had enough support, water, and time to be at her best – and Charly’s best, too — in the ring.

And then they only went and bloody well did it. I could tell from the second Mollie finished that she was disappointed with her ride; she’s a perfectionist and a real shining star in this phase, and it’s hard not to have high expectations when you do a mid-20s score in your five-star debut. But it was a day full of hard judging and little errors across every test, and no one could surpass their 29 mark. We were leading a five-star!

I think everyone expected us to celebrate, but actually, it was an odd situation to be in – a huge amount of pressure for Mollie, of course, and then there was the tricky fact that both of us were struggling enormously with heatstroke. Mollie had been hit by it earlier in the day before her test, whereas mine kicked in as dressage wrapped up and the adrenaline ebbed, but both of us felt totally overcooked, exhausted, and sick. It didn’t help at all that without a fridge, neither of us had had dinner in days, and I hadn’t been able to grab lunches, either. We decided to call for a pizza, but the delivery chap decided to show up at the venue, take a cursory glance around, neglect to call me to find out where we were, and then he left again. Would he be able to turn around and come back, I pleaded with the pizza place after hearing that he’d only just disappeared back down the drive. Absolutely not, I was told. And so we celebrated leading the dressage by going to bed hungry once again and committing wholly to the idea of eating five breakfasts the next day.

Except, you know, who wants to eat anything on cross-country morning? It was all certainly going to be a bit too much for anyone to comprehend, not least because the 35 degree heat made us all feel like walking, talking, malfunctioning microwaves.

I set out onto the course with a plan – or as much of a plan as anyone can ever have on cross-country day, anyway. With the livestream on the go on my phone, I head over to the busy Meßmer water to begin photographing, arriving just in time to see the shock refusal of Ringwood Sky Boy and Tim Price. And then the problems at that skinny brush continued. I sent Mollie two voice notes: the first simply said “don’t listen to the next voice note if you don’t want course feedback,” and then the second said, “look, none of them are reading this fence in time. If you’re going to go straight, risk a second or two to prepare your turn in earlier. Get his eye on it early and really ride it.” Then, it was time to relocate and see what was happening elsewhere on course. I spotted Sweden’s Anna Freskgard galloping back into the last short wooded stretch — and then she didn’t reappear. It was achingly clear that this course was causing way more carnage than any of us had expected. 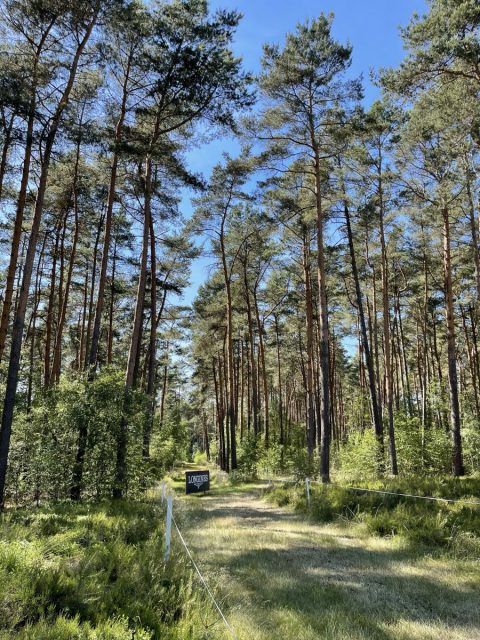 Luhmühlen’s woods are lovely, dark, and deep, and there are miles to go before we sleep. Or manage to hear the tannoy again.

And then, the stream began to buffer. And buffer. And buffer some more. My heart sank as I realised what had happened: I’d run out of international data, which I’d had to use an enormous amount over the last couple of weeks while hot-spotting with my laptop, and because of yet another bloody irritating Brexit hurdle, I evidently wasn’t even going tobe able to purchase an add-on to get back online. Though a text message from my provider threatened to charge me a 50p/MB surcharge for continued use, it wasn’t actually prepared to let me rack up hundreds of pounds in fees over the course of the day. I could no longer see the course, the leaderboard – or, most importantly, any new messages coming in from Mollie as she prepared to head to the start. Had this stupidest of inconveniences just screwed the pooch entirely?

I made it back to the collecting ring just in time to see Mollie and Charly, game faces well and truly in place, waiting for their countdown to begin. We’ve been so inordinately lucky to be helped along the way by a number of incredibly kind and generous people, and Jillian Giessen, head groom for Tim Lips, is really at the top of that list. She helped Mollie get her kit up to the collecting ring, provided much-needed water and support, and then dashed around taking videos on the course as Mollie and Charly attacked it.

Trying to follow Mollie’s whereabouts from the tannoy was horrendous, but getting to see her ride that influential triple brush at the Meßmer water (not pictured in the above GIF) as aggressively as it needed to be done reassured me hugely. The gal was going to be fine. 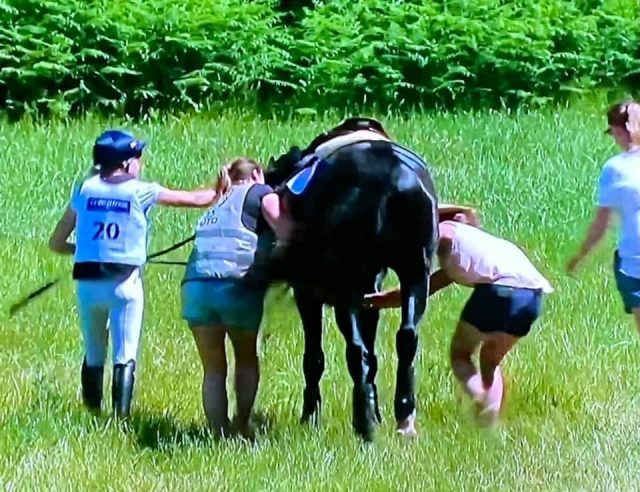 Turns out photographer tabards aren’t that flattering. Who knew.

As she crossed the finish line, whooping and crying after delivering the fastest round of the day, I threw my camera down and sprinted back to the wash-off area, where the three of us — me, Mollie, and Jillian — got to work trying to lower Charly’s heart and respiratory rates in the sweltering heat. This wasn’t helped much by the fact that the wash-off area ran short of water — a remarkable oversight that caught me by surprise, considering how much Germany prioritises horse welfare. Nevertheless, we all worked together to siphon water out of troughs, and everyone’s horses ended up with the care they needed. Even better, Charly’s breeder, a local man named Klaus who hasn’t seen the horse in ten years, was able to be reunited with his pride and joy on the biggest day of his life. It wasn’t the first emotional moment of the day, nor was it to be the last. A lot of happy tears have been shed, and I hope there’ll be more to come. 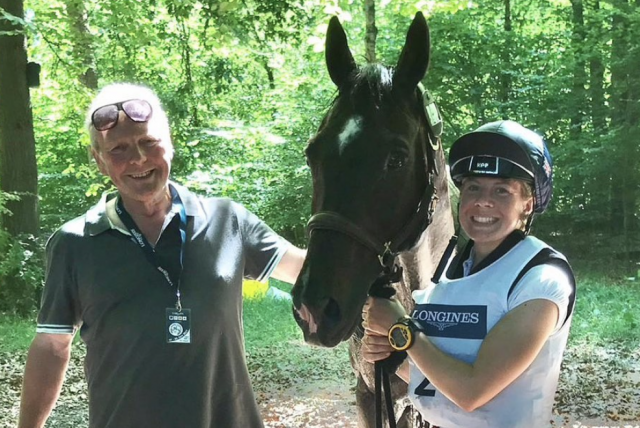 Klaus and Mollie after cross-country.

(I apologise, for what it’s worth, for the brevity of this blog — there simply aren’t enough hours in the day. I hope to be able to give you something a bit meatier, and a bit more behind-the-scenes, on Sunday. Keep it all crossed for us!)

I’m heading to the deflating airbed in the tent for the penultimate night listening to the sounds of the lorry park: someone is playing a guitar a few trucks down, others are chatting quietly through the nitty-gritty of their days in a multitude of languages. Softer, in the distance, I can hear the chorus of the frogs in the Luneberger Heide woods. Tomorrow is another day, and another adventure, and another story yet to be written. I’ll wait with anticipation to be handed the pen. 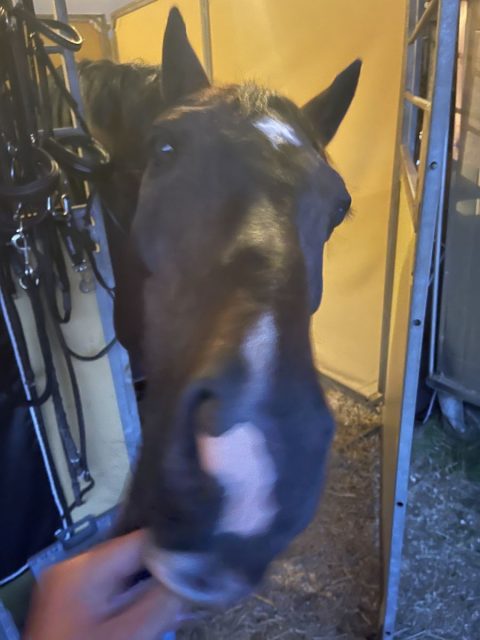