This year at the postponed 2020 Olympic Games, we’ll see some major format changes at play on the international stage. What lies in store, and what does it mean for our sport? Lynne Kaye discusses the topic in a two-part series that was originally published on EN in 2018.

Since the FEI released the new competition format for the 2020 Olympics, I pulled it up to see what the competition will look like — here’s a link to the update regulations. In a nutshell, the FEI’s most important changes are that each nation’s team will have three riders and teams may substitute a reserve horse and rider combination for a team combination mid-competition. In addition, dressage tests will be shorter and all 65 riders will complete dressage in one day. To view the new Olympic Games eventing dressage test, click here – and to see videos of the test, click here.

A side-by-side comparison of former vs. new Olympic formats: 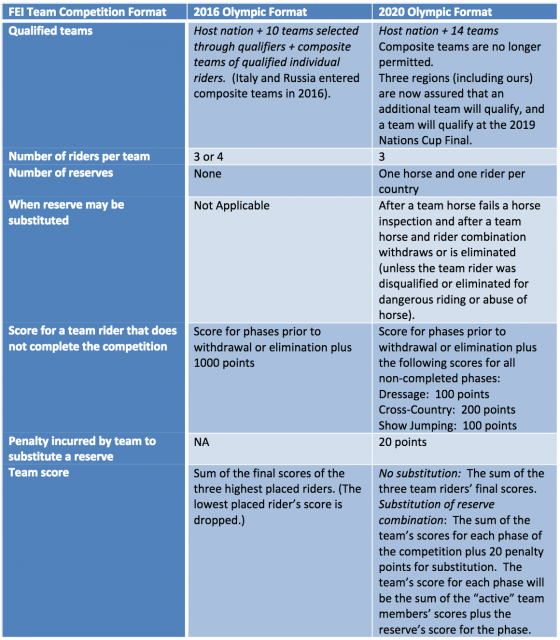 The FEI developed the new competition format to keep equestrian sport in the Olympics. According to FEI President Ingmar De Vos, continuing to be an Olympic sport requires more nations participating in the equestrian competitions, making the sport easier for a casual audience to understand, attracting a younger and larger audience, and making the sport more broadcaster-friendly. (See Lynn’s previous article, “How the No-Olympic Movement is Re-Shaping Our Sport.”)

The changes in qualifying will definitely add national teams. What isn’t clear is how much broader the pool of nations with qualifying teams will be. Thanks to Japan, Australia and New Zealand qualifying for the Olympics at WEG, the new rules are likely to add new teams from Asia which is a big plus. However, the Asian teams may be the only newcomers at the 2020 Games (Editor’s Note: Both China and Thailand will field Olympic eventing teams this year for the first time). Neither the U.S. nor Canada finished high enough in the standings to qualify for the Olympics at WEG, so both nations will be aiming to qualify at the Pan Am Games (Editor’s Note: The U.S. secured Olympic qualification with its Lima gold medal, while Canada did not and will instead send two individuals to Tokyo). Russia did not qualify at WEG either, and they entered as a composite team in 2016, so the Russians will be looking to earn the new Central & Eastern Europe, Central Asia (Group C) slot (Editor’s Note: Russia will be sending two individuals to Tokyo).

The FEI tested parts of the new team eventing format at the Strzegom and Millstreet Nations Cups, pre-pandemic. In those competitions, multiple teams lost members due to withdrawals and eliminations, yet all teams completed the competition and received final scores, so the tests showed that the new format kept teams in the competition in spite of these issues. Hopefully, having more teams in the competition will keep convince more cross country fans to watch their teams show jump.

While the Nations Cup teams officially had three members, the tests showed that teams that brought a reserve combination had a significant advantage over those that didn’t. The British team was able to come in second at both Strzegom and Millstreet in 2018 by using its reserve combination. The U.S. team’s experience at Millstreet illustrated the perils of leaving the reserve at home. The team fell from a tie for first to last place when an injury caused Buck Davidson and Carlevo to withdraw after dressage. Under the new format, Buck’s score counted toward the team score and included 200 points for cross country and 100 points for show jumping.

Here are the final team scores from the Millstreet Nations Cup:

As part of shrinking national teams to three members, the FEI eliminated the drop score which it said was confusing to the casual audience. After coaching the U.S. team at Millstreet, Erik Duvander said, “Many people agree that cutting down to three combinations on each team can be OK; however, the rules and thinking around the substitutes do seem to make the sport more complicated and possibly more difficult to understand.” If the drop score was confusing to the casual audience, the new scoring system is likely to blow their minds. It sure came close to blowing mine!

Strzegom and Millstreet did not test the new, shorter dressage test or completing dressage in one day. The new format has the advantage of being true to the name of three-day eventing and limiting competition to three days. It will also bring everyone who wants to see dressage to the venue on the same day. However, based on personal experience and the results of an informal poll of eventers, it is not clear that the changes will increase the popularity of the dressage phase. Have you ever noticed how people move in and out of the stands between dressage tests? Knowledgeable spectators just watch selected rides because watching combination after combination complete the same dressage test gets boring after a while. 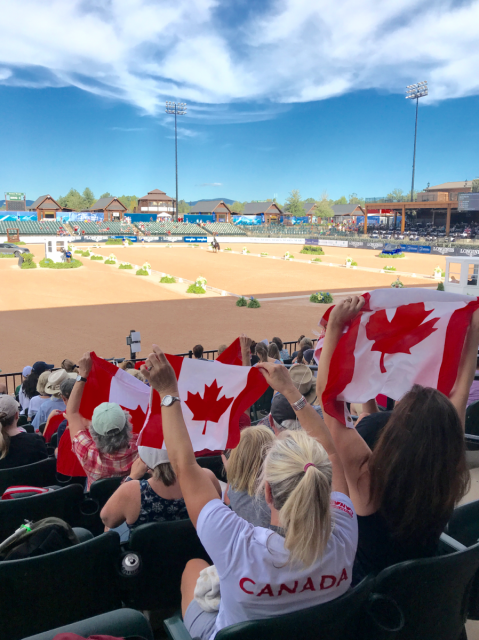 Canadian fans cheer on Jessie Phoenix and Pavarotti after their 2018 WEG test. Photo by Leslie Wylie.

As my husband and I experienced watching reining at WEG, if watching riders compete the same test gets boring for a discipline we know something about, it was worse for a discipline we know very little about. My husband was ready to leave reining after about five rides. I convinced him to stay to watch the U.S. riders in hopes we would understand the judging if we saw the winning rides. It didn’t help. We both ended up bored and frustrated. We won’t attend a reining competition again unless we have someone with us who can explain what the test is supposed to look like and how it is judged.

All in all, the new FEI format has the potential to bring a few new nations to the Olympics, and hopefully, to keep fans of cross country watching through show jumping. The changes do not seem likely to make eventing more general audience or broadcaster friendly, and may make the situation worse by making scoring more difficult to understand.

The good news is that other sports found themselves in similar positions and successfully came out the other side, so the FEI has models to follow and time to make improvements. Part 2 will explore how figure skating went from being considered too technical, too confusing and too hard to broadcast to being one of the most popular sports in the Winter Olympics, and whether the FEI could take a similar approach for eventing.

About the author: In addition to being a long-time eventing fan and amateur rider, Lynne is a sustainability consultant with Unison Advisory Group. She helps clients grow credibility and trust with important stakeholders through more thoughtful engagement, stronger environmental stewardship and higher quality business practices. She holds a Master’s in Sustainability from Harvard and an MBA from Duke. 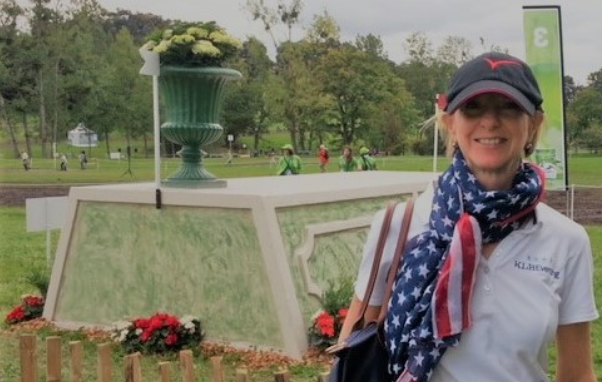