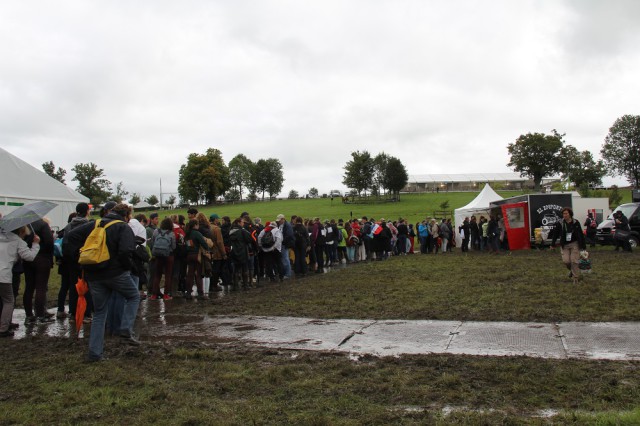 The line outside one of three food vendors at Haras du Pin on Thursday. Photo by Leslie Wylie.

Can’t say we didn’t see it coming. All week the Games had been struggling to accommodate crowd numbers that were less than half of 50,000 spectators Haras du Pin was anticipating for cross-country day. Jenni and I experienced our fair share of logistical hassles…

For sale: All vital organs in exchange for working wifi at #WEG2014. @JohnKyleSpeaks gets first dibs #ArmageddonWEG

One American woman I started talking to (while waiting in a line, of course) told me that for the opening ceremonies at D’Ornano Stadium, attended by 20,000, there was only one open entrance into the stadium. It quickly became bottle-necked and, when it became clear that no other entrance was going to be opened, some ticketholders lost their patience and began surging forward, knocking over gates and creating a dangerous situation for those at the front of the queue.

“I looked around for a security guard to help re-establish order, but there wasn’t one, and the one person who was working the entrance was on her phone,” the woman recalled. “I’m not exaggerating; I was scared for my life.”

The question of the hour: What will happen when 50,000 people show up for XC day at #WEG2014? #WoodstockWEG

It’s about an hour drive from the main venues at Caen to Haras du Pin without traffic. The motorway is wide-open, but once you get off the exit, the route narrows to winding back roads through quaint villages. The organizers claimed to have “a special traffic plan” in place for handling the influx of traffic: They’d set aside some 148 acres of meadow for parking; made some roads one-way; set out police officers to direct the flow; and sectioned off certain roads for officials, organizers; national federations and “special invited guests.”

The plan didn’t work — or at least not well enough. While early birds who arrived well in advance of the cross-country start had no problem getting in — the EN team arrived at about 6:45 a.m. to beat the traffic — those who waited until mid-morning to drive in were met with brake lights as far as the eye could see.

Throughout the afternoon, we kept hearing stories of ticketholders who had been stuck in gridlock for four, five and six hours, some of whom missed or almost missed the event completely. Actual parking wasn’t an issue as the lots didn’t even fill up (on a side note they parked the earliest arrivals in the furthest lots, which makes very little sense); the problem was getting there.

A few angry ticketholders took to venting on the WEG Facebook page: 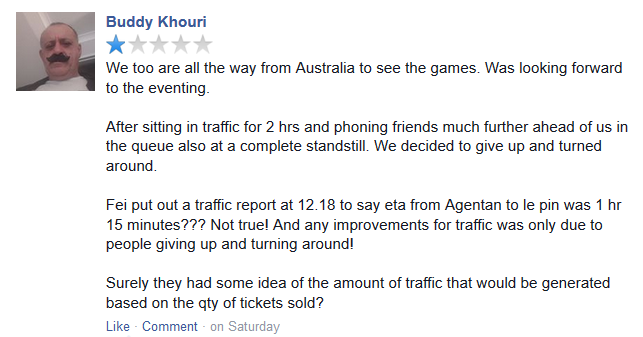 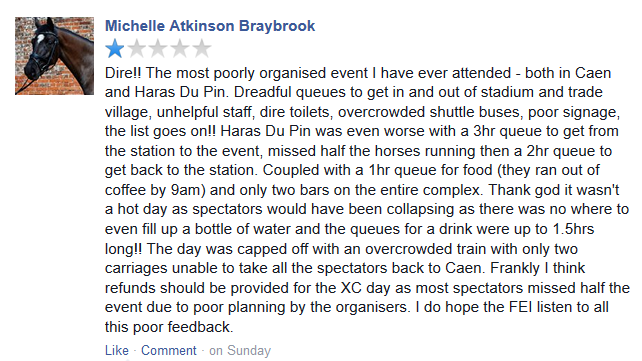 And that’s just the tip of the iceberg. Just click here to see the laundry list of Facebook reviews with grisly details — the descriptions of the toilet catastrophes are barely fit to print. In addition to traffic complaints there are disturbing comments from volunteers, like this one from a cross-country jump judge …

… and a host of other grievances. WEG itself, however, seems happily oblivious, acknowledging the problems but offering no recourse. From a press release issued this morning:

“The Dressage and Cross-Country competitions in the Eventing were fully booked at Le Pin National Stud : 22,600 spectators watched the Dressage and 50,000 followed Cross-Country on Saturday 30 August. Le Pin’s arena demonstrated that it was perfect venue for hosting sporting events of this calibre. Despite the poor weather of previous days, the quality of the track was particularly appreciated by the competitors.

All the meadow car parks were open from 06:30am, accommodating a steady flow of 14,500 vehicles and 120 coaches. Significant work went into preserving and preparing them for heavy use on the day. Despite the best efforts and good will of all, traffic became significantly congested from 09:30am with the journey time to reach the site ranging from 1hr15 to 3hrs. The Organising Committee regrets the amount of time it took for some spectators to access the site.

WEG can spin it however they wish, but it’s our job to make sure that WEG Organizing Committee understands that a repetition of this year’s fiasco will not be tolerated at Bromont in 2018. Email them at [email protected] and let your voices be heard on Facebook and Twitter.

Furthermore, it’s worth starting a discussion about how feasible it is to continue on with the eight disciplines, one venue format, as opposed to separately held championships for the various disciplines. The current system has been in place since 1990, and while the past two WEGs have been (arguably) well run — Aachen in 2006 and Lexington in 2010 — how many other venues in the world have the infrastructure in place to pull off such a feat? It’s a great idea in theory, but the execution, as we’re seeing in Normandy, is easily botched.

What do you think, Eventing Nation?

[Starving to Death in a Mud Pit: WEG 2014 Is the Woodstock of Eventing]