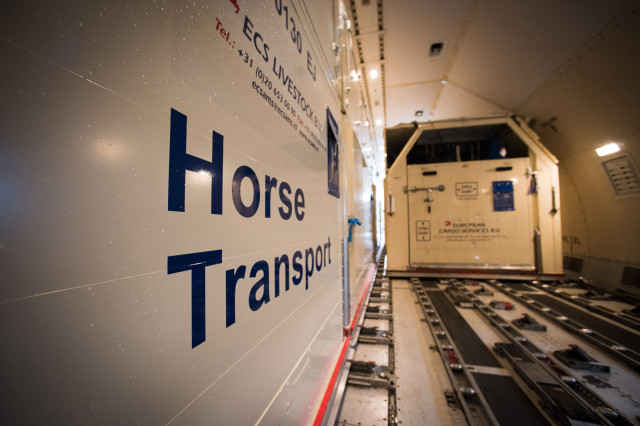 With a number of horses (12, to be exact) having been flown over from the U.S. to the U.K. ahead of the Land Rover Burghley Horse Trials this week, a question that may be in the back of your mind is: Can horses get jet lag?

Now, let’s get to a few more of this week’s headlines in horse health news, presented by MediVet Equine:

If your horse is crooked, it might not necessarily mean that he’s unsound — it might just be the the way he is. Researchers from the Swedish University of Agricultural Sciences and The Royal Veterinary College in the U.K. used a Lameness Locator to definitively show that a group of healthy horses moved asymmetrically even though their owners/ riders perceived them to be sound. They then administered some of the horses a common non-steroidal anti-inflammatory to see if it helped them move more evenly by relieving pain, but found that it made no significant improvement.

So what was causing the horses to move asymmetrically? There are a number of different reasons, but gait asymmetry could be a “non-painful expression of biological variation” (meaning, it’s just the way the horse is) or some painful reason that isn’t responsive to anti-inflammatories. Clear as mud, right? See above about there being no one simple answer for horses! [The Hoof Blog]

Horse Nation tested different thrush remedy products so you don’t have to! Bacterial or fungal infection of the frog or sulci of a horse’s hoof — commonly known as thrush — are nasty, stinky and can be tough to get rid of. Not only is a thrush-stricken hoof unsightly and smelly, but in thrush can even cause lameness if it gets severe enough so it’s best to try and nip it in the bud before it progresses. There are a lot of different commercial thrush remedy products on the market and Horse Nation editor DeAnn Sloan tried a few and knows which one works best. [Horse Nation]