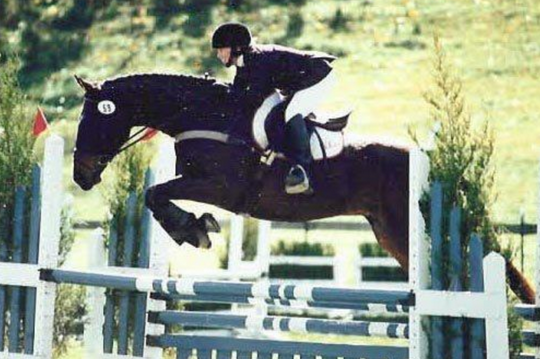 It has been said countless times that the most brilliant horses are among the most eccentric. I suppose the same could be said for people as well: pure genius is often accompanied by oddities and flashes of what some would call “crazy”. At the top of the sport of eventing reside some of the most brilliant horses we will ever see in our lifetimes, and they often are not without their individual eccentricities. Lesley Stevenson’s former three-star horse, Full Tilt, was a horse that most would stick with the crazy label, but Lesley was able to channel the crazy into a wonderful career that spanned almost 10 years.

Lesley purchased Full Tilt, or Delta Bully as he was known then, off the track late in his three year old racing season in 1993. “I didn’t know anything about his history until after I’d bought him,” she said. “I found that he’d won a couple of races but that they’d just sort of given up on him, not because he was slow but because his was too naughty. Rumor had it that he’d find a way to get any exercise rider or jockey off him and eventually they didn’t want him anymore.”

When Lesley brought Full Tilt (Felix, in the barn) home, she found that his naughty behavior followed him from the track. “That behavior continued on for several years, which made him quite a conundrum to train.” Felix liked to play a game where he would spin around and refuse to move, daring his rider to fight with him so that he could show off his stubborn streak.

“He was like a toddler having a tantrum. He was wicked smart; if you were ready for one trick, he’d pick up on it and try something new. If you fought him, he would rear. He wanted you to understand that he was in control, but as soon as you got his eye on a jump he was fine.” 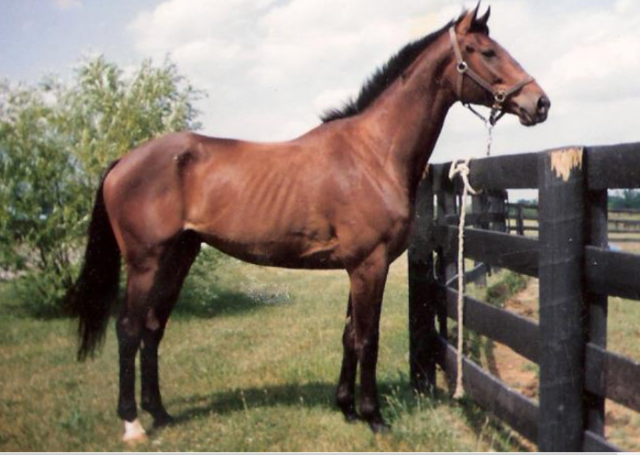 Felix freshly off the track as a three-year-old.

Lesley began eventing Felix and had him out at Novice and Training level. She soon discovered that he held little respect for smaller fences, though, and dealt with Felix’s temper tantrums at a higher frequency.

She recalled one day at the Virginia Horse Trials when she was having difficulty with Felix. “Brian O’Connor was announcing, and he actually warned people not to come up to the warm-up because we were running sideways and almost running into other horses,” Lesley recalled with a chuckle. Lesley received training from Ralph Hill and, later on, Jimmy Wofford, who were instrumental in helping her work with hot-headed Felix.

“I stayed at Training and Preliminary with him for quite awhile because he was quite difficult to control,” Lesley said. “As soon as I moved up to Intermediate and Advanced with him, though, he took everything much more seriously. Finally, the jumps were big enough that I could leave him alone and just let him do his job. That was his element – the long format in particular. The steeplechase phase really took the edge off and got him into a rhythm. He was definitely a long format horse.”

Lesley’s fondest memories of competing with Felix were long format events, where he was able to settle into a rhythm and eat up cross country. “In particular was Fair Hill in 2003, the year the Pan American Games were there. He’d never seen a crowd that big, so of course he thought they were all there for him. He was only 16.1 or 16.2, but that day he felt like he was 18 hands tall; he just ate it up whenever the crowd would cheer. Unfortunately, it didn’t have that same effect in the dressage, but cross country was really his thing.” 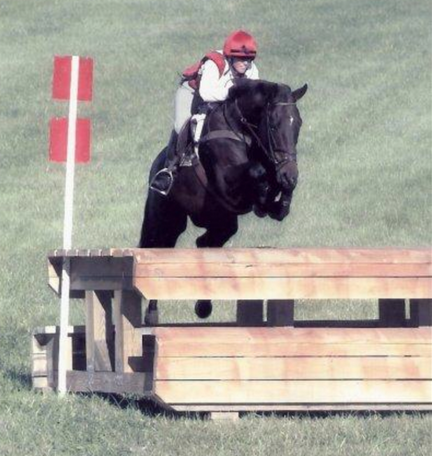 Lesley and Felix at Middleburg HT.

Felix was retired in 2004, cutting off Lesley’s plans to run Rolex that year, due to some recurring soundness issues that were causing him discomfort. “It just got to the point where there was nothing we could really do to make him 100% comfortable so, much to his distress, the decision was made to retire him. He was so unhappy to be retired. He was out in a huge field with other horses, and all he did for the first few months was pace the fence line. I guarantee you if he could pick between a big bucket of grain or a cross country course, he would always choose the cross country course.”

After awhile, Felix accepted the fact that he was retired and began to settle into life in the pasture. While Lesley was understandably devastated to cut her plans with Felix short, she still knows how lucky she was to have had the career she did with him, and has learned a lot from her experiences.

“I really know now that if a horse really doesn’t want to do something, you cannot make him do it,” Lesley said. “He taught me not to fight. His tantrums continued on literally almost every day until he was about 10. Eventually, I just tried reverse psychology on him. If he spun around and refused to move, I made it into my idea and he got confused when I wouldn’t fight him. Eventually, he’d get bored and turn back around and start walking, only to spin back around 50 feet later as if to say ‘How about now?’ I had to be very patient.”

“It definitely does not pay to fight with strong willed horses. Keep them on your side and they will do anything for you. Honestly, his love of a fight was what made him such a good cross country horse. He took it as a personal challenge from the course designers, and the more difficult it was, the more he loved it.”