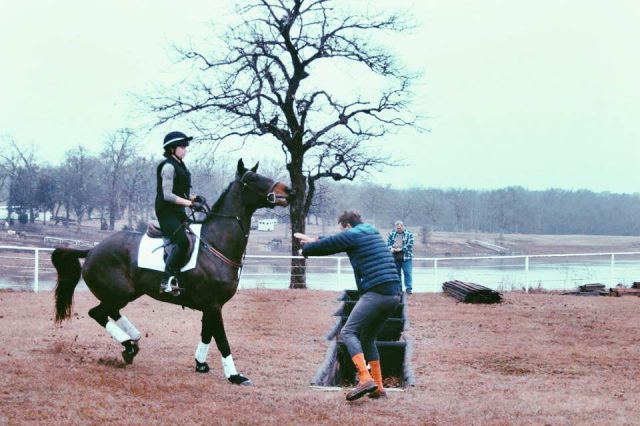 TBT to the time Boyd tried to be a human barricade to get a young horse over a ditch. And failed. Photo courtesy of Boyd.

I stay north for the winter (unfortunately for me), so I’m mostly doing a lot of legging up for a variety of horses, and a lot of riding down dirt roads or around indoors. I don’t mind it, mostly you just set your big yellow watch and do the walk, trot, canter thing, listening to whatever podcast you’re into at the moment. However, the frequency of these kind of rides has increased since the ground has been frozen for weeks, and I’m literally completely and utterly out of podcasts. I subscribe to like 15 and I’ve listened to ALL OF THEM. All of the episodes. I’m going nuts!

The USEF Annual Meeting is underway Jan. 17-20 in Lexington, Kentucky. A General Session meeting takes place this morning, followed by council and committee meetings in the afternoon and the Pegasus Awards Dinner this evening. We’ll be keeping an ear out for any eventing news! [Website] [Live Stream]

Almost a year to the day since the explosive announcement that Larry Glefke and Kelley Farmer were being suspended from the USEF, today our sport’s governing body announced that they acknowledge their mishandling of the blood samples, and all suspensions and fines will be lifted, and the trainer and rider now have full standing in the sport once again. Ultimately, the final settlement ensures that not only will there be no consequences for the prohibited substance found in the horse’s system, but also that there will be little recourse for US Equestrian’s failure to effectively test and prosecute cheaters. [Jumper Nation: Glefke & Farmer Go Free]

Bruce Springsteen has donated tickets to his Springsteen on Broadway show in order to raise funds for the US Showjumping Team to compete at the WEG. The show has been sold out since it began it’s run in October 2017, and runs through June 2018. The package includes several tickets as well as a backstage meet-and-greet with The Boss himself. As a longtime showjumping dad to Jessica Springsteen, it’s not the first time he’s raised money for equestrians, having raised $600,000 for the Rio team in 2016. [The Boss Raises Money for WEG]

Don’t forget! WEG volunteer applications are now being accepted! Snag yourself a front row seat to some of the most amazing displays of equine athleticism this year, and lend at hand this fall at the Tryon World Equestrian Games. Check out this link for more info on how you can become a volunteer. [Volunteer as Tribute]