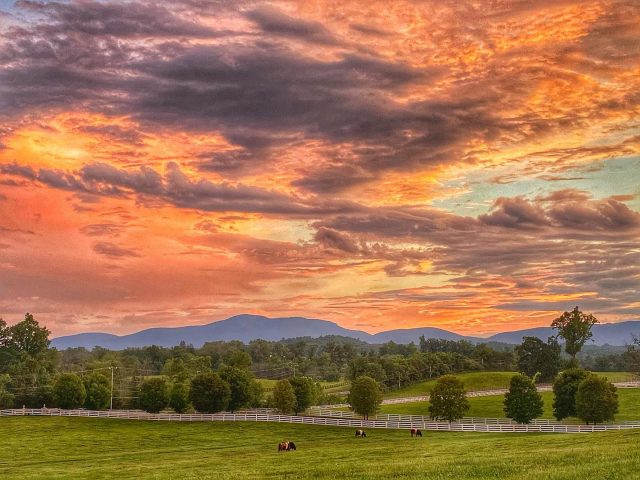 Just a ridiculous sunset scene down the road from me. Photo by Ramsay Farm.

I feel like August is the sneakiest month of all twelve. Every year I’m surprised that it’s August, because technically August is fall, but it still feels like the middle of June, and I’m still absolutely boiling on a regular basis. Fall season and fall weather seem to not necessarily be connected in Virginia.

A 13-year-old rider celebrated the return of competitions by winning four grand-prix classes. Tabitha Kyle rocked out with a grand total of four grand-prix jumper class wins in one day at Le Mans, France. Dear American teenagers: get it together. [13 Year Old Wins Four Grand Prixs]

Don’t miss your chance to win an Equilume system for your barn! The process is easy, just read more about this fascinating new technology, watch a video, and you’re on your way to winning a free set of lights for your most special horse. [Win Equilume]

Having your horse on stall rest is the absolute worst. If you’ve been there, or if you’re there right now, you know it can give both of you serious cabin fever, but you’ll learn some things along the way. [8 Things You Learn While on Stall Rest]

Hot on Horse Nation: 8 Things You Learn When Your Horse Is on Stall Rest

Just in on Jumper Nation: All About Jumps – Q&A with Dalman Jump Co. Founder Javan Dalman

Listen: Hinrich Romeike, the 2008 Olympic Champion & World Gold Medallist from Aachen 2006, joins Nicole to relive some of his favourite memories in the build up to CHIO Aachen Digital Eventing Champion of Champions. [Equiratings]

#ThrowbackThursday Video: Let’s rewind to The Fork 2012, when Devon Brown piloted him around The Fork. Donna Miller’s Connemara stallion, who passed away the following year at age 11, impressed all who watched him compete with his eager gallop, springboard jump and eternally pricked pony ears. In also competed through 4th level dressage and stood at stud at Hidden Creek Horses in Alpharetta, Ga. We miss this little horse!