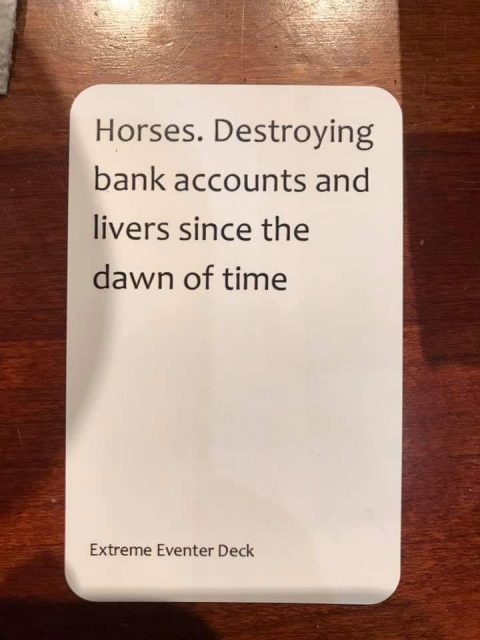 When I saw that photo, I thought maybe it had been photoshopped, and was made to look like Cards Against Humanity, realizing rightfully that CAH probably didn’t have an entire deck dedicated to our little community of lunatics. Then, after some googling, I found that Equestrians Against Normalcy is a thing, and they DO have an Extreme Eventer Deck of cards, and I immediately added it to my Christmas wish list/shopping cart. I don’t know if I’m late to the party on this little discovery, but it totally made my day.

The action is already well underway at the Ocala Jockey Club Three Day Event, and with the last FEI event of the season comes much excitement. They are offering an inaugural CCI3* level in addition to the CIC3*, with 13 and 12 entries respectively. Two horses who competed in the WEG this year are making their return, Felix Vogg’s Colero and Nilson Moreira da Silva on Magnum’s Martini, both in the CIC3*. There is $20,000 in prize money on the table, as well as an additional $10,000 from the Ocala Jockey Club awarded to top performing Thoroughbreds this weekend. [OJC 3DE Fast Facts]

British Olympic show jumper Tim Stockdale has passed away at the age of 54. Tim’s death comes after a short battle with cancer having been diagnosed early October. Tim competed for Great Britain at three senior championships and more than 50 Nations Cups; among the highlight of his long career, he was the highest placed British rider with Corlato at the Beijing Olympic Games in 2008. Our condolences to his family and friends — what a tremendous loss. [Tim Stockdale Passes Away Following Illness]

If you’re attending the OJC 3DE, be sure to stop by the luncheon tomorrow to hear Gemma Tattersall and Lynn Symansky speak about their journeys to the top. Moderated by Jen Roytz, the Executive Director of the Retired Racehorse Project, the purpose of the luncheon is to discuss what it’s like to be a female athlete at the top of the sport, and how to overcome challenges along the way to achieving your goals. [OJC Showcases Ladie’s Lunch]

Looking for some inspiration to get you through the week? Seek no further than this brave blog by Nick Hinze for COTH, as he tells us about battling cancer all year while still keeping a full competition schedule and even winning a few. [Nick Hinze Won’t Let Cancer Slow Him Down]