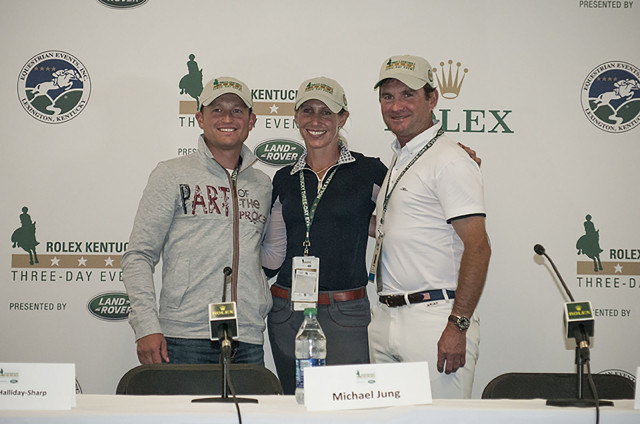 The early leaders gathered in the media center here at Rolex this afternoon to rehash the rides that put them into the top three after the first day of dressage. It’s surely still anyone’s game at this point, with many powerhouses yet to come tomorrow.

However, it was Michael Jung’s day to shine aboard fischerRocana FST, who knocked about five points off of her score from 2015 to lead on a 34.4. She’s got a nine point lead over second placed Liz Halliday-Sharp and Fernhill By Night, and many will be chasing the bar she’s set tomorrow.

As per usual, Michael was complimentary of his horse and says she did so well here last year that he decided to put Kentucky into his plans for this season as he looks ahead to Rio.

Here are some of the top quotes from today’s press conference. You can view the full video below as well.

On Michael’s decision to come here with fischerRocana again: “I have three really good horses this season and we make a plan in the winter. I think from last year I feel that Rocana likes this competition a lot. She’s very happy in the stables, she traveled more easy than La Biosthetique Sam, for example, and she likes the stadium and the cross country phase, so that’s the reason why I ride her again.”

On Phillip being the first in the ring today: “It’s not always great going first, but when you enter three horses you know you have a pretty good chance of going first. You never know what the scoring’s going to be and I was pleased with the way he went. That’s probably his best four-star score so I was really excited. There’s still another day to go so we’ll see what it looks like at the end of tomorrow.”

On whether or not Phillip thinks he can catch Michael Jung on Mighty Nice tomorrow: “I hope so!”

Michael Jung: “I’m very happy about fischerRocana, she did a wonderful test. She traveled very well, she feels very happy in the stables, was very nice to ride the last days and that altogether makes for a good result in the dressage.”

Liz Halliday-Sharp: “Blackie is literally one of the nicest horses — he’s a very nice person. He’s kind of like a big black labrador. I think I got the warm-up right today; it’s all about trying not to get too excited. He tried really hard today. He’s a bigger horse — he’s 17.1 — and he can kind of get away from me in the test a bit, just get kind of long, but today he really tried. We’re starting to get a good partnership now.”

Phillip Dutton: “(Fernhill Fugitive) has really matured. I think if I had the time again I might not have done as much with him as a younger horse and I think it’s taken awhile for him to get stronger and mature. Silva Martin had a big influence on him as well. She took him for quite a few weeks and worked on his flatwork. So I think it’s a whole combination of things that have come together — he’s matured and he’s a very quiet, good-natured horse so he’s pretty easy to teach.”

On how Derek di Grazia’s course looks for Saturday:

Liz Halliday-Sharp: “I think the course is challenging enough. We obviously have five water jumps this year, that’s quite different. I think there’s a lot to do at the end of the course and you’re going to need to have a fit horse.”

Phillip Dutton: “It’s sort of what we expected — it’s a big, forward riding course and I think it’s good. If you’re on green horses I think you can still make a good experience for your horse, but if you want to make the time and you want to try and do well I think it’s strong enough to sort everybody out as well.”