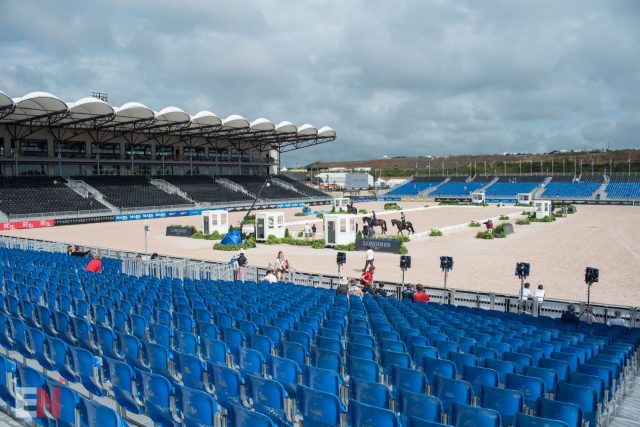 The WEG venue is located in Mill Spring, North Carolina, which is about 350-400 miles (560-640 kilometers) west of the mandatory evacuation zones along the coast — far enough inland that Tryon is unlikely to experience the full force of Hurricane Florence.

“We are kind of a safe zone in a lot of ways,” Sharon said. “It doesn’t mean we wouldn’t get some wind and rain, but typically storms like this do not impact us in a significant way.”

That said, Hurricane Florence will absolutely bring heavy rainfall to the Tryon area. The key question at this point remains how much rain, and it is still too early in the week for forecasters to make an accurate prediction on rainfall amounts. Hurricane Florence is expected to reach the East Coast of the United States on Friday.

The National Weather Service Greenville-Spartanburg office is releasing daily updates on how Hurricane Florence will specifically impact the Tryon area, and said “uncertainty remains too high to be specific about the exact impacts or precise timing.”

“The track of Hurricane Florence will need to be closely monitored by interests across the western Carolinas and northeast Georgia throughout the week,” the NWS said. “Some impact from this system in our area will be possible late in the week, perhaps from late Thursday through the weekend, but uncertainty remains too high to be specific about the exact impacts or precise timing.”

In the meantime, Sharon said Tryon has a “strong, robust emergency plan” in place and is working closely with local law enforcement and emergency services to be prepared for what Hurricane Florence brings to the area.

There are 1,288 permanent stalls on-site at Tryon, and all barns are built in conformance with the
International Building Code to withstand winds up to 90 mph (144 kph). The venue at Tryon served as an evacuation site for horses during Hurricane Irma last year, and Sharon said their first priority will once again remain the safety of horses and riders.

Tryon is working with three different electrical suppliers during WEG and has numerous generators on-site. There are also two high-volume wells on the property, both of which are attached to the emergency generators and supply drinkable water. There are multiple shelter options on-site to ensure human safety, including the 300,000-square-foot indoor arena, the new Johnson Controls Center and the basement of the Legends Club. 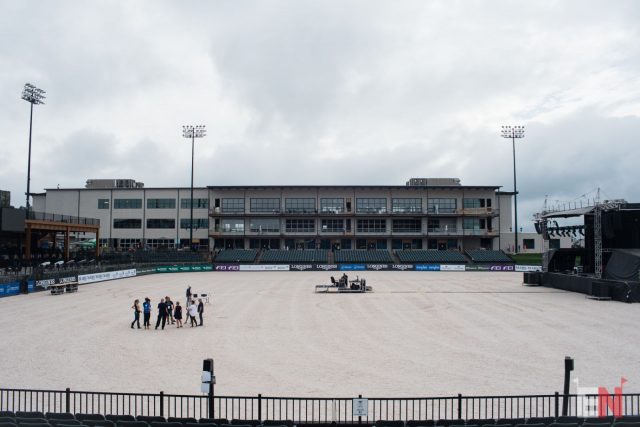 The Johnson Controls Center, pictured in this photo, is designated as a shelter option. Photo by Leslie Threlkeld.

Depending on the severity of the storm, the contingency plan will include:

As for what happens when the storm does hit, activity at the competition will be halted if lightning strikes within 5 miles (8 kilometers) of the venue. FEI General Regulations, Article 109.12, allow the FEI to alter the schedule of the competition if necessary to ensure safety of horses, riders, spectators and all involved:

Subject to the unanimous agreement of the Tryon2018.com, President of the Ground Jury, Technical Delegate and President of the Veterinary Committee in consultation with the Organiser, a Competition (either before or during) can be postponed and/or cancelled, not only due to force majeure, catastrophic occurrences, extreme weather conditions but also for non-compliance with FEI Rules and in specific situations where the welfare or safety of the Horses, Athletes, Officials or the public is compromised.

“This is an outdoor sport,” Sabrina said. “When it comes to contingency plans, we have those in place. This is not the first time we have had adverse weather situations. … This is something we are used to. It’s what we do.”

If a sport at WEG is delayed in any way by the weather, Sharon clarified that all tickets for spectators will still be honored.

As for how eventing’s schedule might be impacted, Sabrina said it “depends on the amount of rainfall. We could make the cross country shorter or decide to move the date of the competition itself.” Any changes to the cross country course or schedule will be communicated “well in advance,” she said.

No specific timeline was provided as to when a decision will be made on the length of the cross country course or when the final schedule for eventing will be determined. It truly does depend on exactly how much rainfall Hurricane Florence brings to the Tryon area.

Tryon is working with the National Weather Service to release twice daily weather advisories, as well as updates on schedules and programming. Updates are being posted on the WEG website here, as well as on Facebook and Twitter. Text “WEG2018” to 888777 (U.S. phones only) to receive immediate notifications. EN will continue posting all the latest news on Hurricane Florence.

The press conference concluded with a question-and-answer period. In response to why much of the planned construction at the venue, such as on-site hotels, was not completed ahead of WEG, Sharon explained that Tryon quite simply ran out of time.

“When we took on the Games we did have big ideas and big dreams and still do. This is not a one-time event for us. This is a long-term facility with a grand vision for bringing horse sport here from around the world forever. We started down that path. We had less than 22 months to prepare, and we just couldn’t quite accomplish what we set out to do,” Sharon said.

“We knew that sport was first and foremost, so the priority was given to the preparation of the courses. That became very challenging for us this winter. We had more rainfall in the first five months of this year than is typically here in 12 months of the year. We lost a tremendous amount of time in construction during these winter months, and it put us behind. Then we had a real challenge this summer with heat and limited hours we could work during the day out in open space.”

The lack of on-site hotels meant Tryon faced a dilemma in where to house grooms, and their solution of a temporary tent with bunk beds received backlash on social media. “We have very few people in the tent,” Sharon said. “We’ve offered options to everyone.”

In response to the plan to manage flooding on the property, Sharon said, “One of the challenges we may face is that it will be difficult for folks who are traveling in to us, or those who are leaving during that time period. … If any of our guests have concerns, we want to hear about that.”

As Tryon braces for Hurricane Florence, construction continues full speed ahead at the venue. The Opening Ceremony is underway with a free concert for the community featuring Hunter Hayes. The competition officially begins tomorrow with endurance, dressage and reining.