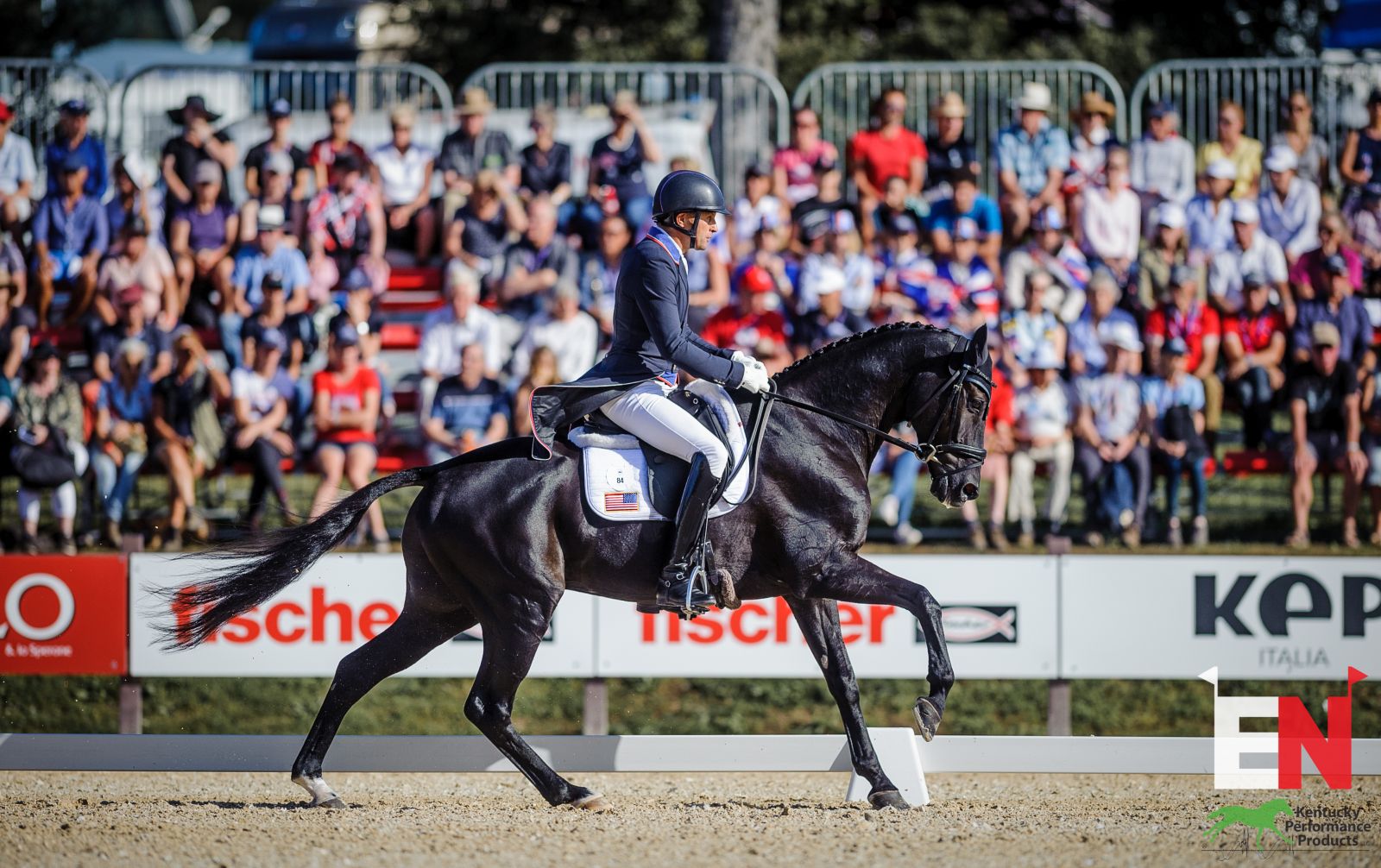 Boyd Martin and Tsetserleg power to a 26.2. Photo by Tilly Berendt.

The United States of America is in bronze medal position at the conclusion of dressage at the FEI Eventing World Championships.

Tamie Smith is in fifth place as the best of the bunch and very much in the hunt for an individual medal with Mai Baum on a score of 24. You can read more about her day in our lunch report.

Team anchor Boyd Martin brought forward an individual mark of 26.2 with Tsetserleg TSF, who is owned by Christine Turner, Thomas Turner, and Tommie Turner, to help the U.S. stay in third place position.

“He’s such a trier, this little horse, and you know, he’s so reliable in there. He was a little bit quiet and backed off and I wish maybe I had one less ride so he was a bit more excited — but that that can backfire as well in these big championships when they get a bit nervous. All in all I was pleased, could always be better, could always be worse. 26 is a pretty good score though,” Boyd said.

“Thomas,” the 15-year-old Trakehner gelding (Windfall II – Thabana, by Buddenbrock), is a veteran campaigner for Boyd, and their partnership is rock-solid, which should play to their advantage on tomorrow’s intense track. Despite their five-star experience, Boyd said he won’t take a single fence — or the current team standing — for granted.

“[Bronze now] doesn’t mean anything. I’ve been on so many teams where I’ve been sitting pretty after the first day, and after the cross country, I think, is when the competition really starts,” he said. “I think it’s a proper, what they call it a four-star that feels like a five-star course over nine minutes, fifty [seconds]. But like you said, I’m on a veteran. And he’s done bigger and badder and longer courses. So I’ve got some comfort knowing that he’s dealt with harder fences. But any jump you can make a mistake and it can all go wrong, as I found out at Tryon.”

The time will likely already be influential, but even more so for Boyd who currently shares a three way tie for 14th place with Tim Price and Ros Canter. 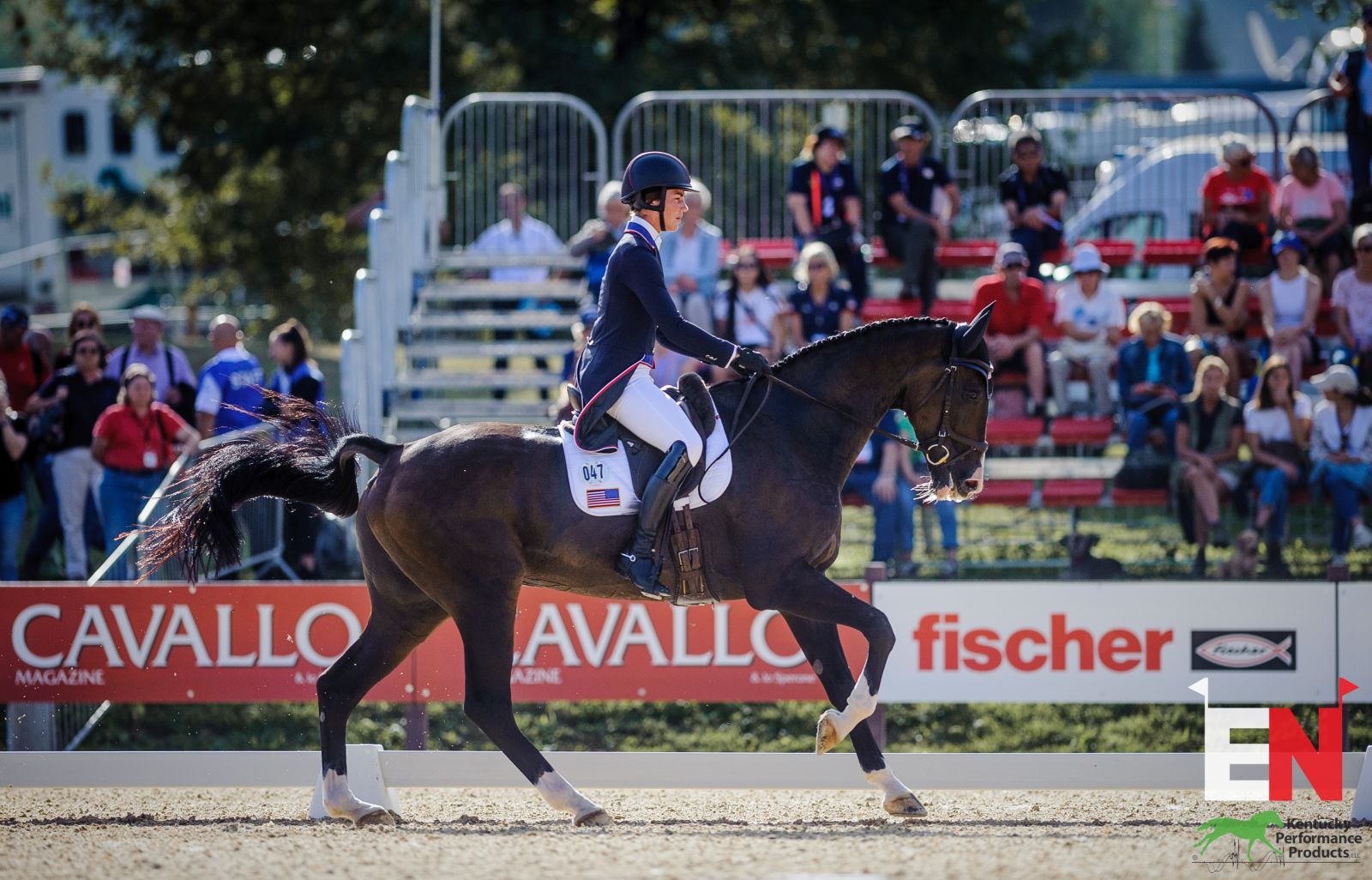 Ariel Grald was the first U.S. rider in the area this morning. Competing as an individual, she and Annie Eldridge’s Leamore Master Plan gained invaluable championship experience in this weekend’s pressure cooker, but the level-headed debutant rose to the occasion to score 32.5 for 50th place.

“I’m just happy to be here and the horse has worked pretty well this week. He is a bit exuberant and gets a little nervous. He tries really hard, but dressage is not his strength, and he does worry a little bit. So my main goal was just to go in and keep him with me. And I think for the most part, he really did that,” Ariel said. “Obviously, the competitive rider in me wants to go in there and knock it out of the park, but this is not his strength, and we’re just building each time and getting a little better every year. So that’s all you can hope for.”

Ariel has been an injection of fresh talent to the top of the U.S. program, and to see her at a major championship is a huge success story for her and all her supporters. “I tried to just keep pausing and looking around and soaking it in because as a rider, it’s so easy to just sort of get laser-focused and put tunnel vision on and so I just kind of try to keep taking a breath and looking around. I just have great teammates and I’m really, really honored to be here with all of them. I’m learning a lot and enjoying it,” she said. 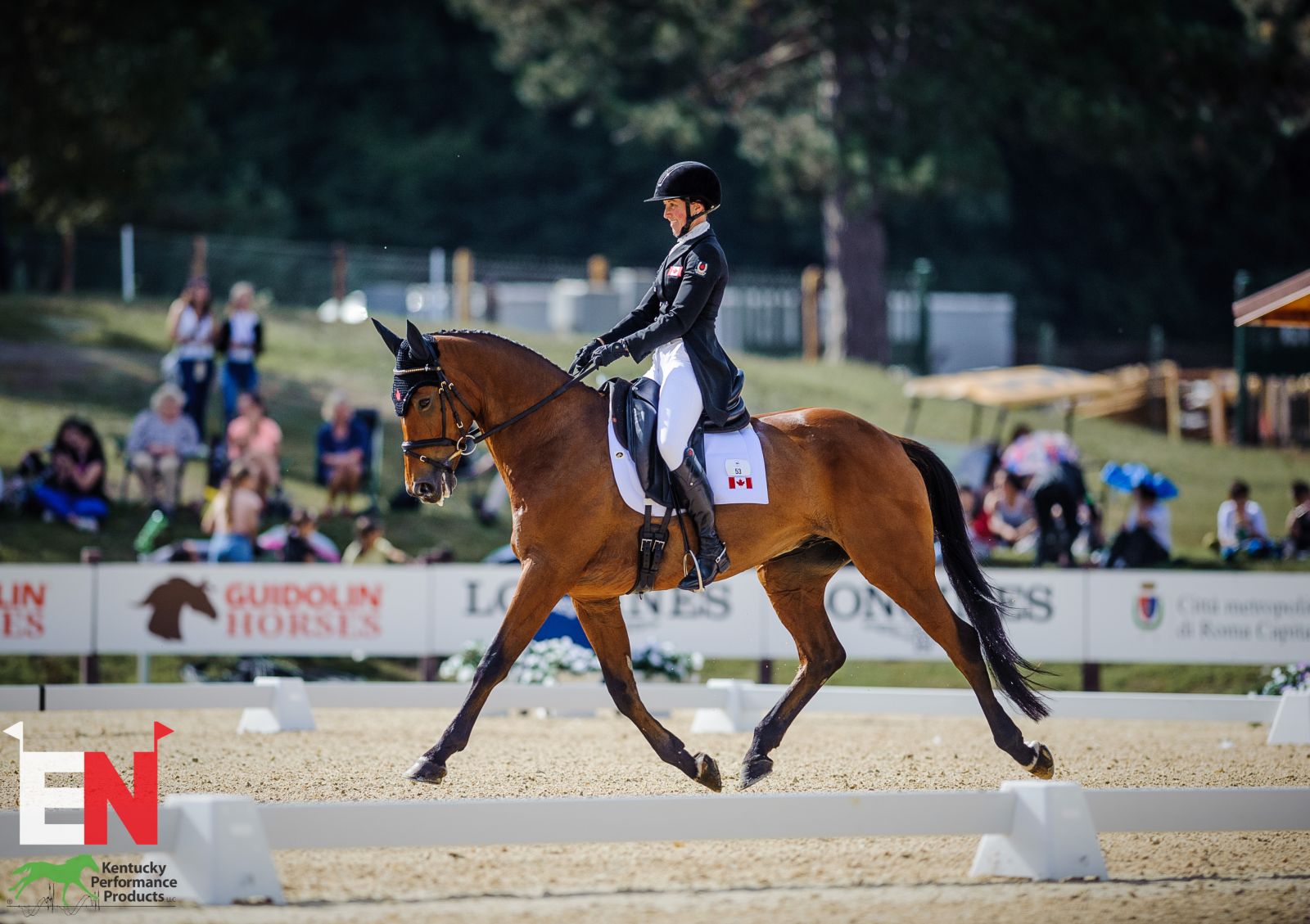 Holly Jacks is the best-placed Canadian aboard Candy King. Photo by Tilly Berendt.

Two Canadian pairs came down the centerline today to produce the teams best two dressage scores. Holly Jacks is the top placed of them in 49th place on a score of 32.4 with Candy King, a horse who she nearly had to sell last year. Fortunately for her (and team Canada!) friends rallied to form a syndicate to let Holly keep the ride.

“I was really proud of him. He went in their and definitely felt the atmosphere a little bit and sucked back with the crowds, but as the test went on he thought about what we were doing and came back to me. He’s a young horse and exciting for the future and this was a great experience,” she said.

Ringside with Holly is longtime dressage trainer Tom Dvorak. “I cracked a joke last year that if this horse was on the World Championship team that he would come, so as soon as I got he call I called him. It’s great not only to have his support as a coach, but as a person, too.”

Canada made it here to Pratoni thanks to the efforts of the ‘Pratoni, Let’s Go!’ fundraising efforts, which were headlined by a major contribution from Kelly McCarthy-Maine and Shane Maine. “You finally have a horse ready for a Championship and you hear we might not send a team… to have all these people come forward to help us, you kind of keep waiting for something bad to happen because you can’t imagine how exciting it is. It’s a dream come true. I hope this horse learns a lot here, and in two years time he’ll be a fabulous horse for Paris,” she said.

It is absolutely beautiful. I think they’ve done a great job of asking proper championship questions, but they’ve put options out there that ask the same kinds of questions to get everybody home. 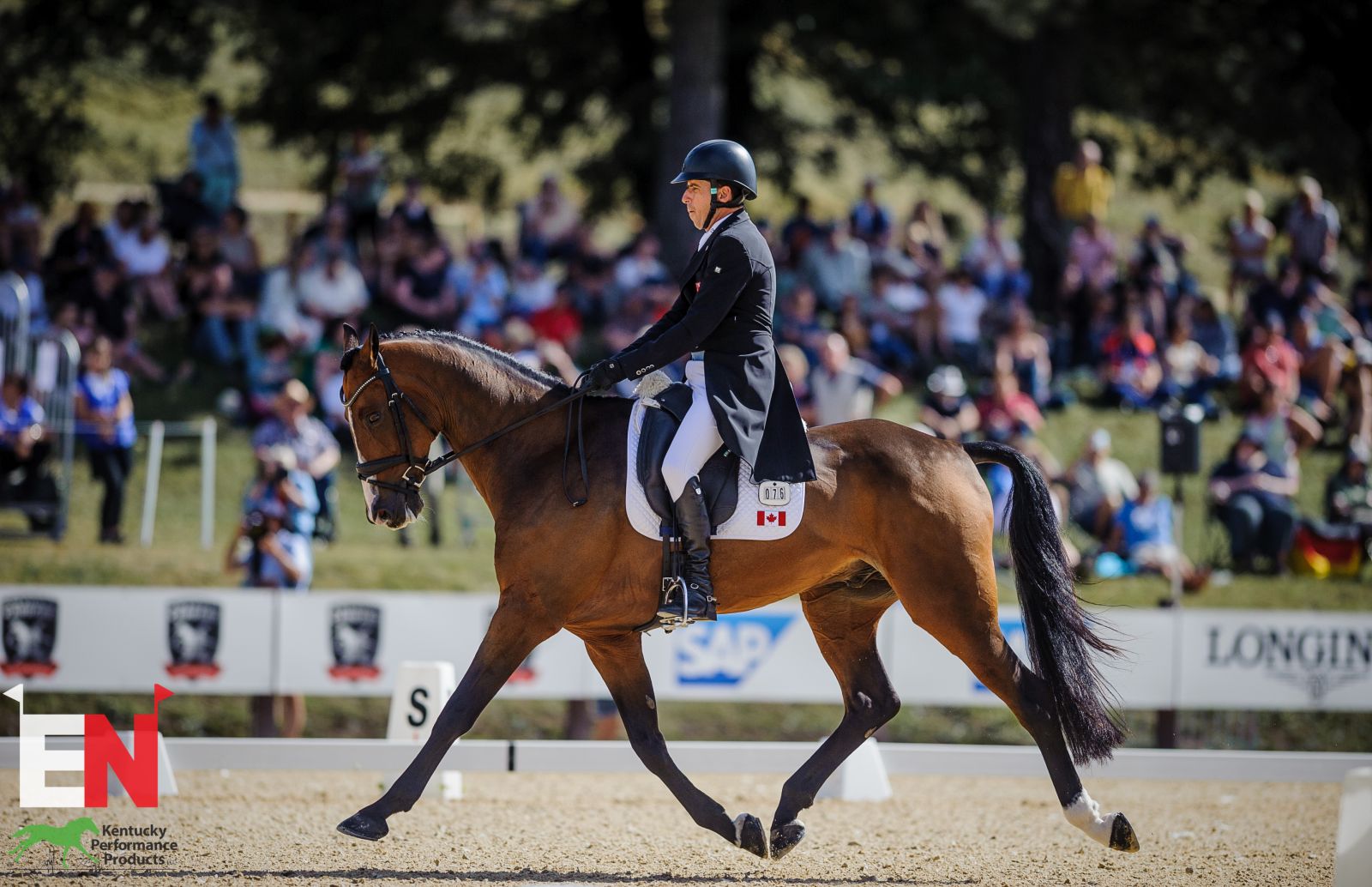 Mike Winter will be the team anchor as the final rider aboard El Mundo, who is owned by Mike, his wife, Emma, and Jonathan Nelson. He’ll hold 58th position overnight on a score of 33.3, which, he admits, was higher than he had hoped.

“I just don’t think it’s fulfilled my potential or his potential rather, but you know, it’s happened,” he said. “I couldn’t be more pleased with him and our whole High Performance team, I just would like a bit more I from myself.”

The Britain-based rider has been a vocal advocate for representation and diversity within the sport — as well as promoting awareness of human rights issues outside of it. This week, he rides with a lapel pin honouring Canada’s First Nations, designed by Kwakwaka’wakw artist Curtis Wilson. It’s part of a push for a unified Canada that sees indigenous peoples enjoy the same rights and representation as their compatriots.
“I think it’s really important that sport is involved in social action and picking the causes that are important,” says Mike.”Our sport is wonderful but we’re not always engaged with diversity and equality issues. The pin I’m wearing represents the role that First Nations play in Canada. It’s important that we recognise Canada’s history of wrongs in the building of the country and how still today, that affect the human rights of those indigenous people. There are opportunities in equality — things like clean drinking, water, education, health care. I think those things need to be talked about, and being Canadian, if I can do a small bit to make people aware of then, I hope that helps.”

To catch up with the rest of the North American riders, check out our Thursday report.