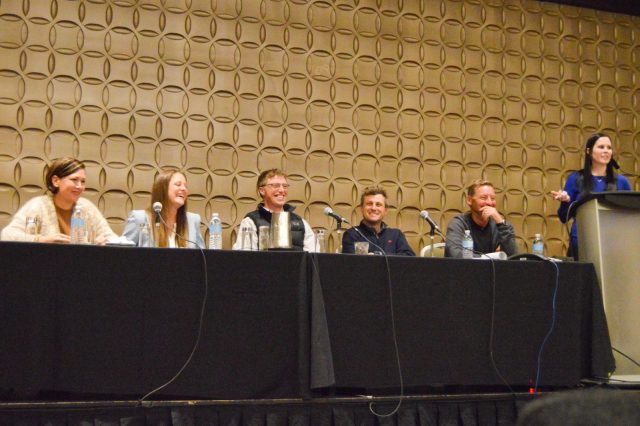 On the amount of pressure the team faced to turn in a top performance:

Erik: “When it comes to championships, some people love the the pressure and it gets the best out of them and some people fade. Often, you don’t know how much pressure you’re under until it’s done and you say, ‘Holy sh*t, that was hard!'”

Boyd: “I think obviously failure makes you better. At least for me. In a way my failure (at WEG) made me stronger, because I know what it’s like to drop the ball and let a team down.”

“I really think America had the best riders, a top coach, top grooms, no stone was left unturned. When you can go home saying, ‘I couldn’t have done anything better or tried any harder’ then you can sleep a bit better at night.”

“We got to Lima and it was more competitive in the cross country than we dreamt of, but we had top horses and top riders and the key is to ride really well in that moment. You have to show you can walk the walk for 7 minutes in the dressage, for 10 minutes in cross country, and for 2 minutes in the show jumping. I can say that I did all I could in those moments.”

Doug: “It was a massive amount of pressure. I was lucky to be selected — it was a bit of a long shot concerning the horse and myself. It was a fleeting thought that (Starr Witness) would make it, but she just kept getting better and better. I’ll probably never forget jumping the last boat jump and the relief coming across the finish line. It was a very big honor.”

“Cross country was challenging. The first time you walked it you got a plan, but then the next time you walked there would be some change – a rope or a brush or some un-jumpable thing – so we didn’t have a solid plan until the morning of. But everything did ride to plan in the end, except for the spectators – I did try to run one of those down.”

Lynn: “This was my first time in a games or championships being the pathfinder. We didn’t know what to expect on the day but I was comfortable going in that position and brought back all the information I could.”

“It was a nicer feeling walking out of theses games than the last one (WEG). And it was special because everyone here jumped a clean round on the final day. You look back on it and think what an honor, but when you’re there you have a job to do and you think about that.”

“It was nice to have such a great reserve there (Liz Halliday-Sharp and Cooley Quicksilver) and I say that because I’ve been there and I know what it’s like. It’s an incredibly difficult spot to be in, but she brought a lot to the team.”

Tami: “I went there hoping to bring my best result and it was a huge learning experience for me. You can’t really explain being on your first team, but the pressure was tremendous. I had a different experience than the other three, because I didn’t have a clean cross country. Looking back I could have just prepared better and I didn’t quite know what that took. I just learned a ton and that you can never prepare too much for something like that. Even though it was a level lower (CCI3*-L) the track rode much more tricky than any of  us thought.”

“That event event changed my career. Going into Boekelo (Nations Cup) I had a whole different understanding of being on a team. You don’t know what you don’t know until you’re there. The good news is that I made that mistake early in my career and it will never happen again.”

On their main takeaway from the experience:

Tami: “It’s really awesome being on a team even when you don’t do well, but the rest of your team does. I stood on the podium with these guys and got a gold medal and I’ve dreamt of that for years. I can’t wait for it to happen again.”

Lynn: “I somehow survived after flying into the first water jump. I’ve been on a lot of teams with Boyd and a group that’s been rotating. It was nice to have some new blood going into a games. It’s been a different experience each time. Even when Tami went out and didn’t have the ride she hoped for, it’s still nice to go out and root for everyone.  It’s nice to have everybody’s back. It’s very special to look around and see that all the grooms are hugging and crying and see Joanie Morris ( former USEF Managing Director of Eventing) who has been with us at every games for the past 7 years and this was her last.”

Doug: “The monumental effort made by, not just out team members, but the countless support staff from the USEF and USEA, our owners, people in the barn and everywhere. There’s no way we could do this without them and we are incredible lucky to be the ones standing there in the end.”

Boyd: ” I got a new weird admiration/ friendship/ bond/ respect for these guys. We bump into each other every second weekend of the year in competitions and you see them in warmup and we’re all in our own little bubble because we’re all trying to outdo each other at domestic competitions. But spending time with them and living with them, it reverses it.”

“Also the admiration for this horse I’ve got (Tsetserleg). When I first got Thomas I didn’t think he was anything good and it took a while until we clicked, but he turned out to be special. My mother said, every now and then just stop and look around because it’s amazing where these horses will take you.”

On the pathfinder position:

Erik: “I have to make the call on (who goes out first as pathfinder” but the system I always believe in is to talk to each rider about where they would feel comfortable going I think everyone in this group put their hand up that they would go first. Having seen Lynn, she just has that character she’s not fazed by it and I knew she’d give a good debrief after. Every rider likes a certain type of information — some want the whole bloody story, some want it filtered, some just want to know yes or no if it rode to plan.”

Lynn: “All of thee guys are experienced enough to go first, but it’s a different level of pressure at these competitions and it’s about knowing the kind of information to bring back.”

Erik: “I think about it always when we have riders on our teams, that they have to be seen as leaders and show others what it takes and how to be a leader. Any young rider should look up to these guys as to how they operate on a daily basis and what they do to get better. It is how these guys behave and these guys were impeccable.”

Boyd: “It’s nerve-racking process to get there, it’s not as glamorous as it seems. You get there and you have one horse to focus on and you train him for an hour and have the other 23 hours left to worry. You do manage to keep yourself busy and occupied once you get there, you go to watch other athletes and disciplines, but you have to still focus on your ride and the competition.”

Tami: “One of the chefs, I think from the Mexican team, came up to me after cross country and said, ‘Well if this eventing doesn’t work out, you know you could have a career in dressage.”

Doug: “Normally you would have a riders tent with 6 or 8 TVs, but because there was a media blackout we didn’t have any of that so we posted people strategically around the course and reported back about everyones rides via text to one another.”