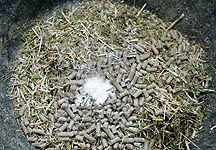 “The primary controversy here in Louisville, Ky., is the proposed rule to limit therapeutic non-steroidal anti-inflammatory drug use from the current allowable two NSAIDs to one; the USEF Equine Drugs and Medications Committee proposed the rule change, which drew heated debate at the U.S. Hunter Jumper Association Annual Meeting in December but hardly a blip at the earlier U.S. Dressage Federation and U.S. Eventing Association meetings…

Here at the USEF Meeting it appears a compromise is in the works, which as of today, has been approved by the Drugs And Medications Committee, Veterinary Committee and the Executive Committee, among others, and has strong support from the breeds and disciplines. The rule change proposal will ultimately face a vote during the USEF Board of Directors meeting on Sunday.

Snow and Ice in UK Wreaks Havoc, Costs Coaches Thousands
Ravel Wins USEF Horse of the Year: Lets see him do XC
Help Wanted: British Showjumping Manager
The closest thing to an event this weekend we have heard about is the Willow Run Combined Test at Brook Farm.   Here is an article about the event, and thanks to KL for sending us the tip.