We’ve reached the end of an intense and dramatic week for eventing, and now the grand finale is upon us. All of the remaining U.S. and Canadian horses have passed the jog, after some tense moments, and 60 horses will move forward to show jump in reverse order of standing. Optimum time is 93 seconds.

Follow along here for all of the action as it happens. Currently, one rail separates the top five, so don’t expect the finish of a crazy WEG to be anything but extraordinary. 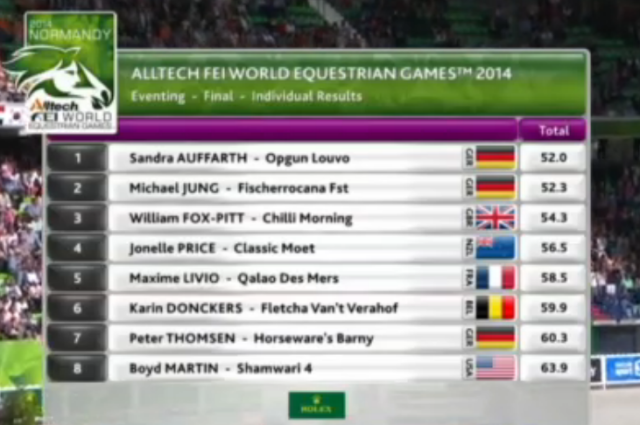 11:04 a.m. EST: Sandra is your new individual gold medalist! What a year for Germany.

11:01 a.m. EST: William has knocked a rail, allowing Sandra Auffarth to step in to take the individual gold.

10:56 a.m. EST: Michael Jung and fischerRocana FST (his SECOND STRING HORSE) turn in a perfect clear round to finish no worse than bronze on a 52.3!

10:51 a.m. EST: Andrew Nicholson and Nereo seem to have some disagreements on course, and they drop into 9th with 12 faults. Boyd moves up to 8th.

William Fox-Pitt is waiting for his turn in the jumping test of the #Eventing ! #WEG2014 pic.twitter.com/wirzsWYc8N

Karin Donckers and Fletcha van’t Verahof is next in for Belgium. Can’t afford a pole down without dropping down the order. 6th overnight.

10:46 a.m. EST: The crowd goes positively mad for Maxime Livio and Qalao Des Mers, who have a stunning clear round to help France finish in fourth and get their Rio qualification.

The Germans are really rather good at this showjumping lark, are they not? Another clear, this one for individual rider Peter Thomsen. #WEG

Annie Clover seems unsure of herself and has 4 down plus a stop at the last. Very sympathetically ridden by Nicola Wilson

10:33 a.m. EST: Nicola Wilson and Annie Clover competing individually for Great Britain have a refusal and a total of 28 penalties. They drop into 25th on a score of 92.0. 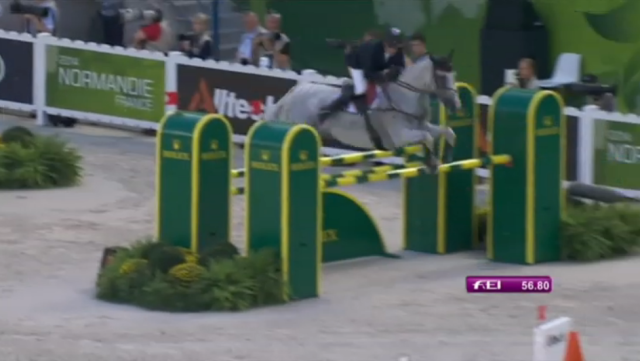 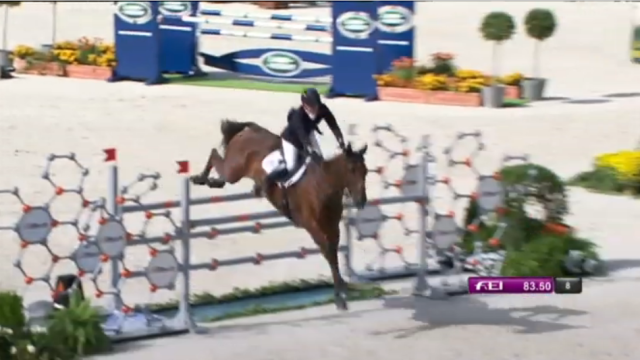 Never thought I’d say this but I really hope team GB win gold. Would be awesome for @Harry_Meade to have a gold medal #RIPWildLone

High Kingdom is really trying, swings his hindquarters high and aside to clear one…

10:20 a.m. EST: The Netherlands are guaranteed at least bronze after Tim Lips and Keyflow N.O.P’s round! 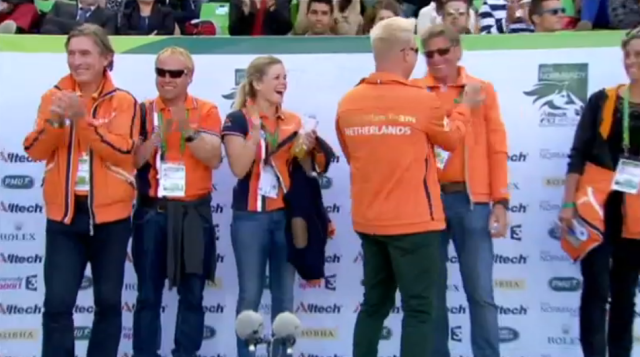 There was some confusion over her cross-country round yesterday – read our report to find out what happened #WEG http://t.co/bgUS3XFMsT

10:08 a.m. EST: Sam Watson and Horseware Bushman have a heartbreaking refusal and come home with 21 faults. Barely, by the skin of their teeth, Ireland is still in sixth place as a team and will obtain their Rio qualification.

10:06 a.m. EST: Fenyas Elegance jumping strong for Aoife Clark. They finish with just four faults for a total of 84.3 and keeping Ireland in the hunt for a Rio qualification.

10:03 a.m. EST: The crowd noise is deafening for French rider Rodolphe Scherer and Makara De Montiege after a clear round! 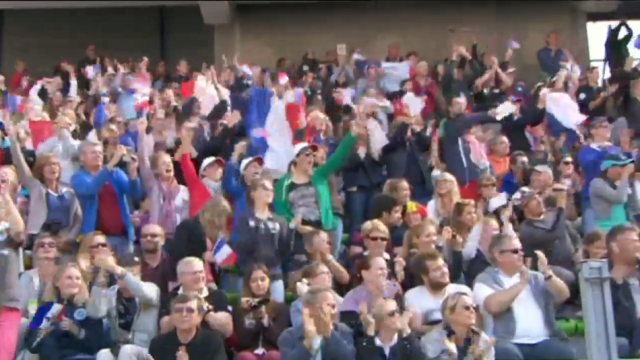 Canada have finished on a team score of 356, not sure if that will be good enough to get them into the top 6 for Rio qualification.

9:57 a.m. EST: Jessie Phoenix and Pavarotti have four rails down to finish on a 99.6 for her weekend. My video cut out right as she went in, so apologies for no photos or GIFs!

9:50 a.m. EST: That’s what a veteran looks like! Kim Severson channels Fernhill Fearless unique jumping style and delivers a flawless clear round! She finishes on a 91.2.

#camericanpride #weg2014 Kim brought Sparky home like the true pro she is! great to watch 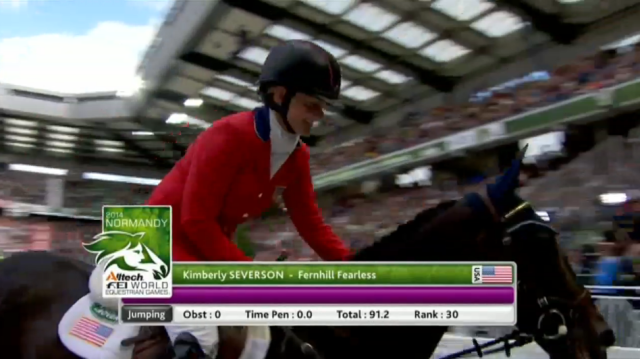 Lucky Accord has his own style but it is working… argh, last pole goes down. Ian Stark doesn’t approve of her lovely pink jacket, boo. 😉

Scratch that. Merel Blom has just been elected FEI president after that clear round #electric #atmosphere #WEG2014 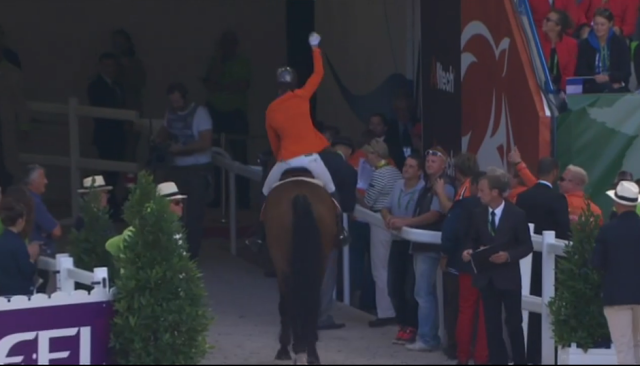 9:36 a.m. EST: Tubber Rebel looking a bit out of steam for Dag Albert, but Dag did a wonderful job of getting him around. 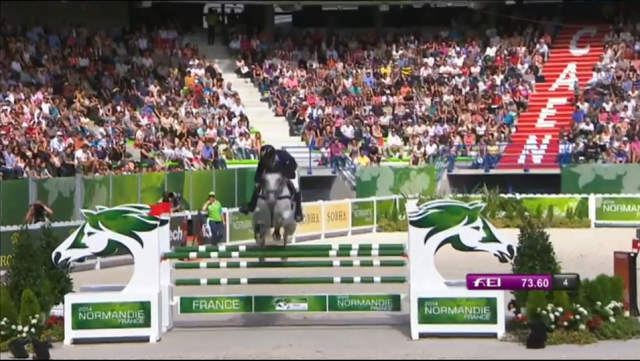 Deafening cheers – must be a French rider coming in. Phenomenal the support the crowds give their riders. 3 down 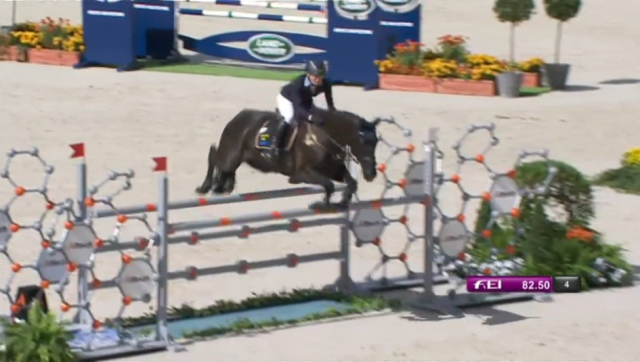 9:27 a.m. EST: Tate got a huge welcome from the crowd when he entered the arena.

9:25 a.m. EST: Sinead Halpin and Manoir de Carneville had two unlucky rails down for a weekend total of 114.4. Tate looked fighting fit today and got a bit hasty in the treble, causing one down in the middle. 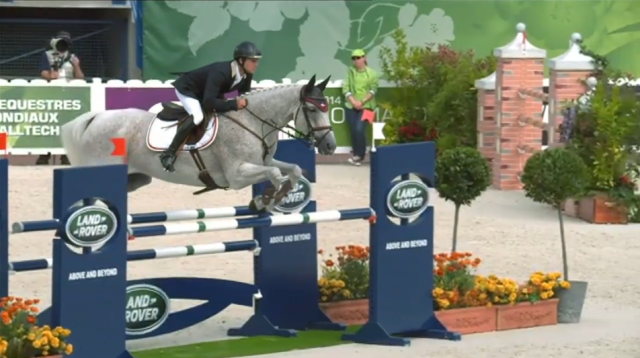 9:15 a.m. EST: Poles are falling throughout the course, and the crowd and atmosphere is definitely getting some of these horses up. Crowd is cheering after the treble. #showjumpettiquettelessons 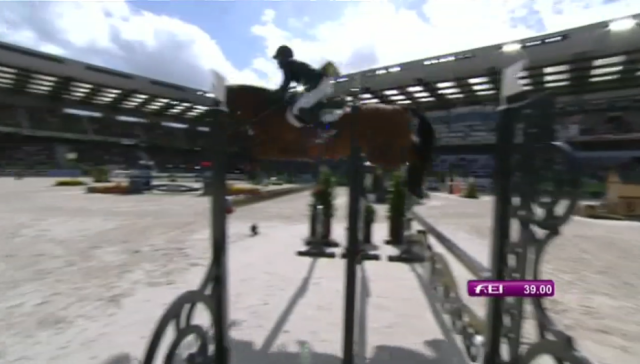 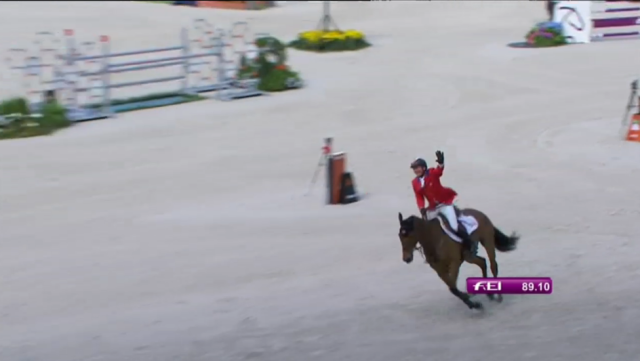 Electric Cruise, another clear round to go with his Olympic clear rounds. Pour us a Guiness!

8:54 a.m. EST: Dirk Schrade and Hop and Skip, for Germany, are the first clear round of the day!

8 horses have gone so far but still no clear round! #WEG2014

Sarah Ennis and Horseware Stellor Rebound (IRE) sadly have the last fence down and 1 time, 143.5 #WEG2014 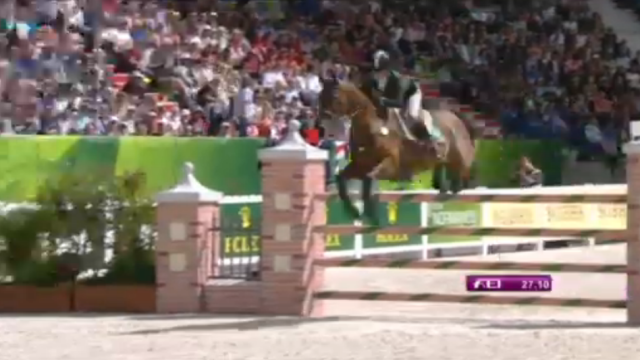 8:35 a.m. EST: Two down and some time for Martin Maivald (CZE) and Gomba. Lots of oohs and ahhs from the crowd this morning!

8:25 a.m. EST: Click here to check out EN’s Twitter page for photos of each jump on course today! 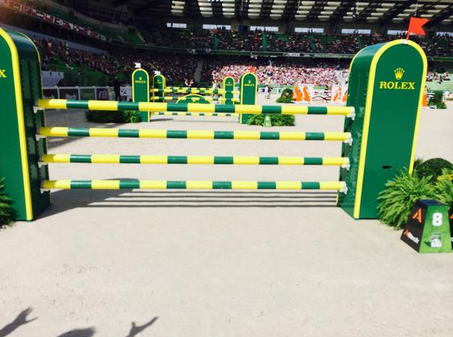