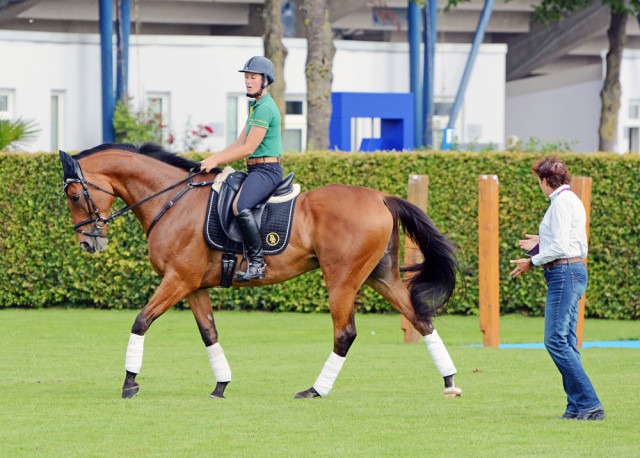 Holly Jacks-Smither and More Inspiration in their flat school with Penny Rowland today at Aachen. Photo by Jenni Autry.

Guten tag from Germany! It’s been a mind-blowing first day here at Aachen, and tonight’s highly anticipated Opening Ceremony hasn’t even started yet. This year’s FEI Eventing Nations Cup at Aachen feels decidedly different right off the bat, as the CICO3* is running in conjunction with the 2015 FEI European Championships for dressage, show jumping, vaulting, reining and driving.

Move-in for the competition started today, so a slew of world class horses patrolled the grounds this afternoon as riders went out for a first stroll and look at the venue. A big grassy field clustered in the middle of all the stadiums serves as a nice place for the riders to hack, and Canadian team members Holly Jacks-Smither and More Inspiration had a good school there this afternoon with Penny Rowland, who is here coaching her this weekend. 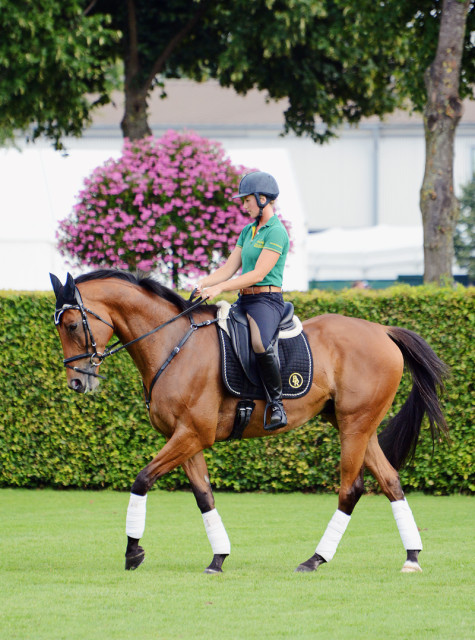 Holly Jacks-Smither and More Inspiration in their flat school with Penny Rowland. Photo by Jenni Autry.

Holly and “Morris,” a 10-year-old Thoroughbred gelding that raced at Woodbine and Fort Erie until she pulled him off the track, are tackling their first overseas competition and first team competition for Canada this weekend, having decided to compete at Aachen on the Nations Cup team instead of aiming for Blenheim CCI3* next month.

With it being such a sudden trip across the pond, Holly’s usual coaches Tom Dvorak and Jon Holling were unable to accompany her, and she said this afternoon that she’s grateful to have Penny help her out. She also has super groom Uli Paulischta here pampering Morris, as well as a fabulous team therapist and veterinarian in Usha Knabe.

Dressage is still a work in progress for Morris, and Holly said she’s aiming for a score in the mid- to low-50s when they enter the little white box come Thursday. The eventers normally do their dressage for the CICO3* on footing in the Deutsche Bank Stadium, but with the Euros monopolizing that stadium for reining and vaulting, the eventing dressage is now taking place in a grass field that is typically only used for the driving here at Aachen.

The dressage stadium set up and ready for #Aachen2015 eventing! Show jumping will also be held here

Temporary bleachers have been erected in the field, and while it’s not as intimidating as the big Deutsche Bank Stadium, there is still plenty of atmosphere here for dressage. The eventers will also do their show jumping in this field, which is a big change from the huge main stadium where this phase is normally held. But everything is a bit different this year with the Euros running concurrently, and only pure dressage and show jumping are in the main stadium this year.

After Holly’s lesson with Penny, I hung around the same grassy field where a few more of the eventers were beginning to get out on their first hacks after settling into stabling. Austin O’Connor and Kilpatrick Knight, Mark Kyle and Jemilla, Padraig McCarthy and Simon Porloe, Caroline Powell and Onwards and Upwards, and Ingrid Klimke and Horseware Hale Bob were all out letting their horses stretch their legs. 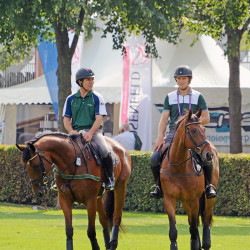 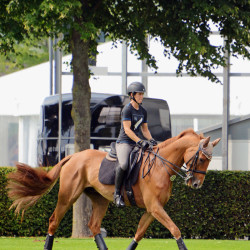 Caroline Powell and Onwards and Upwards. Photo by Jenni Autry. 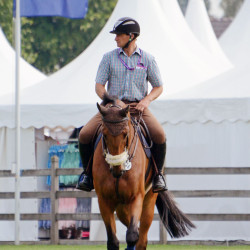 Then, it happened. I was snapping photos of some of the side saddle pairs, who were preparing to practice for tonight’s Opening Ceremony, when I spotted dressage superstars Charlotte Dujardin and Valegro, who are here at Aachen to compete in the Euros. “Blueberry” was casually strolling across the grassy field to the adjacent covered indoor arena — walking along like he owned the place — with the Team GBR dressage contingent and super groom Alan Davies in tow behind.

Charlotte and Blueberry schooled for the better part of an hour, separating the work into four separate sections, with each one building perfectly on the last. First: A session of long and low work to get Blueberry loose and limber. Second: Lateral work, with a particular focus on the canter half pass. Third: A focus on piaffe, passage and one-tempi changes. Fourth: Transitions between collected, medium and extended trot, as well as halt transitions. 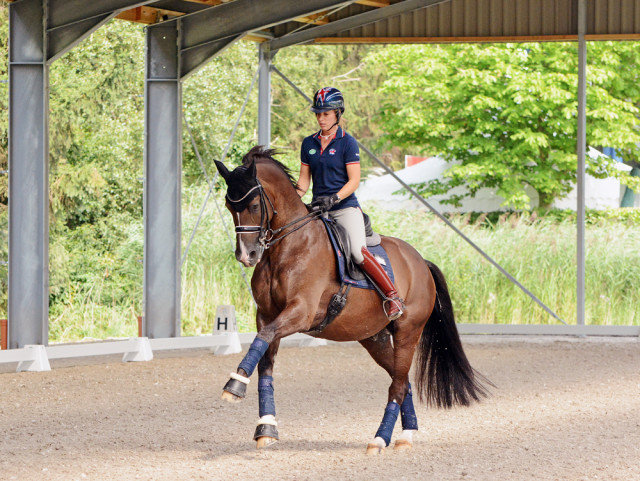 Between each of these sections, Charlotte would give Blueberry a pat and let him have a brief break at the walk and then halt, during which Alan would swoop in to feed him several treats (I couldn’t see exactly what they were, but I know Blueberry has a penchant for sugar cubes) and sponge the horse down on his face and between his hind legs if needed.

Then after each break, Charlotte and Blueberry would pick back up with the next piece of their flat school. It was a fascinating process to watch how Charlotte built the suspension and power throughout each session, which culminated in a crescendo in that fourth and final part of the school, with Blueberry’s now world-famous, explosive extended trot simply wowing everyone who happened to be nearby at the time to watch. 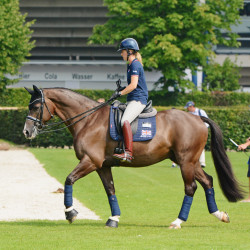 Blueberry on his way to his flat school. Photo by Jenni Autry. 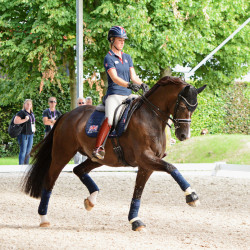 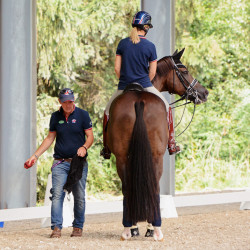 Blueberry looking very pleased with himself during one of his breaks. Photo by Jenni Autry. 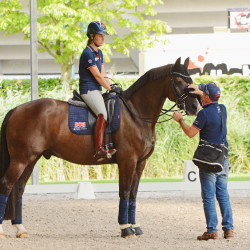 Blueberry’s groom Alan Davies wipes him down during the workout. Photo by Jenni Autry. 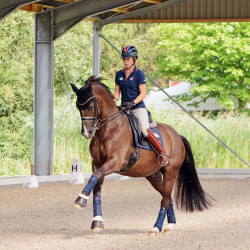 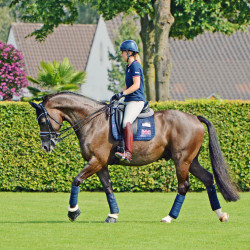 All smiles after their school. Photo by Jenni Autry.

By the end of the hour, a sizable crowd had gathered around the covered indoor to watch Charlotte and Blueberry work their magic. While there are a variety of languages being spoken here at Aachen this weekend, the phrase “That’s Charlotte and Valegro!” seems to transcend all language barriers. People were materializing out of the bushes to watch them school. Even Ingrid Klimke watched from Horseware Hale Bob’s back while she hacked him around the adjacent field. 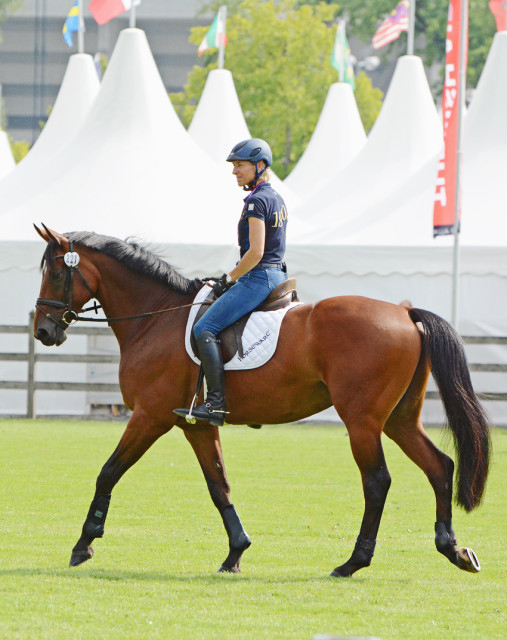 Stay tuned for much more from Aachen, as I’ll be catching up with the remaining Canadian team riders and the U.S. team tomorrow. Holly and Morris were holding down the fort for Canada by themselves in stabling earlier today, with teammates Kathryn Robinson and Let It Bee arriving later tonight and Rebecca Howard coming in with Mark Todd this afternoon.

Phillip Dutton, Lauren Kieffer and Lynn Symansky have been based at Reed Kessler’s farm in nearby Holland for the past few days, and they vanned over to the venue late this afternoon. They didn’t go out for a hack after arriving, so I’ll plan to catch up with them tomorrow. If you missed the good news from this morning, fourth Team USA members Colleen Rutledge and Covert Rights get on their transport from England tonight.

We’ve been receiving a lot of questions about whether the eventing at Aachen will be live streamed, and it looks like ClipMyHorse.tv will be at least be live streaming cross country to viewers in all countries on Friday. I am still trying to verify if dressage and show jumping will also be live streamed. The horse inspection is tomorrow afternoon here at Aachen, so keep checking back as I take you behind the scenes, and be sure to check Instagram for more photos.